“He’s somehow powerfully gentle,” says Irene Fernando of her mentor Jerry Rinehart. Now a Hennepin County Commissioner, she was a high-achieving high school student from the Los Angeles area when he helped recruit her to the University of Minnesota to study business.

At the time, Rinehart was Dean of Students and Vice Provost of the University — a position that allowed him to aid the ambitious Fernando.

“He was great,” says Amelious Whyte Jr., who served as Rinehart’s Chief of Staff and Assistant Dean. Nearly a decade later, Whyte now is Assistant Dean, Diversity, Equity and Inclusion & Public Engagement, for the College of Liberal Arts (CLA). He’s also Chair of the Friends of U of M Libraries board, so in some sense, now boss to Rinehart, who serves on the Friends Board.

“What I loved about him was that he did not focus on getting the credit for himself or our office,” Whyte adds. “What he cared most about was serving the students.”

Rinehart, an Iowa native who moved to Minnesota on a trial basis with his New York City-bred wife 49 years ago, loved saying “Yes.” So, adds Whyte, the very rare times when he said No, Whoa, or Let’s think about it, those words carried extra weight.

Snap decisions? No, thanks; better to hear all sides and mull over the situation. “That’s my most common expression: ‘I don’t know what’s going on here, so tell me,’” says Rinehart, explaining his leadership style. “I guess I’ve always been a little slow on the uptake, and that’s been a real advantage. … We don’t all need to be visionaries.”

A graduate of Dartmouth College, Rinehart came to the U as a PhD student in English Literature in 1973. Rinehart slid over into administration, first as the student services coordinator for the lower division pre-business majors  under the aegis of CLA. Then he was hired to develop the upper division advising program for what was to become the Carlson School of Management.

Part of his interest in the position was to set up an honors program incorporating the works of William Carlos Williams, Wallace Stevens, and other great American modernist poets. “It was kind of shaking up these business students a bit,” Rinehart says. “I was completing my MBA at the time, so I figured that was the best thing I could do.”

He originally supposed, after developing an admissions program that helped students identify with the business school from Day One, he might eventually retire from this business school post. Then a tutoring scandal hit the U’s basketball program, resulting in a reorganization of the U’s leadership. A new Senior Student Affairs Officer position was created, which included a national search. Intrigued, Rinehart applied.

“I was totally surprised to get it,” he says now, “but I’m very happy that I did.” He was hired by Robert Jones, formerly a Senior Vice President of the U, for whom the U’s Urban Research and Outreach Center is named. “He was a great mentor,” Rinehart says of Jones.

“That’s my most common expression: ‘I don’t know what’s going on here, so tell me.’ I guess I’ve always been a little slow on the uptake, and that’s been a real advantage. … We don’t all need to be visionaries.”

For her part as a person needing advice, connections, and, at times, a foot in the door — a mentor — Fernando says Rinehart was essential to efforts to found Students Today Leaders Forever (STLF) by herself and a small group of undergraduates.

She asked Rinehart to be an advisor to the brand-new group. “He said, ‘Yes.’ It was wild,” she says now.

This group of four brash fellow travelers wanted to start a national organization that would make a big impact. Rinehart suggested, she remembers, that before making a big splash nationally, she and her team should try starting something in their own backyard. It worked: With the guidance of Rinehart and Whyte, that STLF grew, blossomed, and has since devolved to a few active chapters, including at the U.

Fernando’s gratitude remains strong. “He holds a special place in my story and in my heart,” Fernando says, noting that Rinehart played classical guitar at her wedding.

After STLF was successfully built by her and her friends into a national organization, a few of those who helped shared a secret with her: “The only reason I worked with you initially was that the Vice Provost of the U asked me.” Yet, with his deliberative style of openness, listening to all involved, and taking his time in making a decision, Rinehart was on solid ground.

Getting things done, for the better

“I was the head teller of the Bank of Jerry,” Whyte says, jokingly. One very somber event, 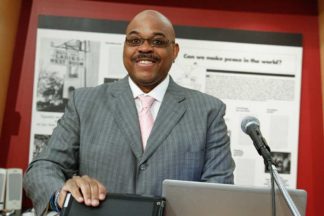 however, made their collaboration even more remarkable. While it has to do with funding, it really meant taking care of one student’s family.

A woman from Cameroon, a student at the U, died unexpectedly, Whyte remembers. Her family in far-away Cameroon were not well-off financially. It wasn’t even clear that her local friends and supporters had enough money for a funeral.

After consulting with Whyte, Rinehart decided to ask the then-President of the U, Bob Bruininks, to help out. President Bruininks agreed that the U would pay the full bill; the friends and colleagues of this student were able to honor her memory, and the U helped transport her remains to her family in Cameroon.

The gentle force of Jerry Rinehart once again made a difference in people’s lives.

“He is very generous with praise and acknowledgements of the contributions of others,” Whyte says of the humble (no brag) Rinehart. Whyte says that at Rinehart’s own retirement party, he mostly talked about colleagues, friends, and his wife.

“I also served with him on a board for the U YMCA and he’s been the Pres of U Retirees Association. . . . He likes to use his skills and make a difference.” Quietly and powerfully. (Rinehart learned this month he is being inducted in the University Y’s “Hall of Fame.”)

And he likes being a member of the Friends of the U of M Libraries Board. “It’s been really exciting,” Rinehart says. “I didn’t know the Friends before Lisa German came.” While the Libraries were in a leadership transition, Rinehart was also, as he more seriously pursued his guitar studies and his golf game.

Then COVID arrived in March 2020. “I’ve just been totally impressed with how much has been accomplished,” Rinehart says, “with Lisa’s ability to pull people together and get things done.”

He adds: “When it looked like everything was being sort of cut back and taken away, she found ways to grow, and to convince others of the importance of the libraries. That’s been really impressive.”