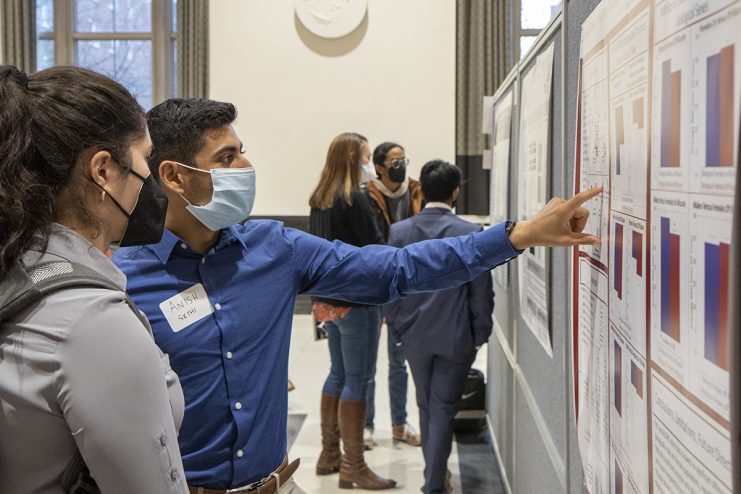 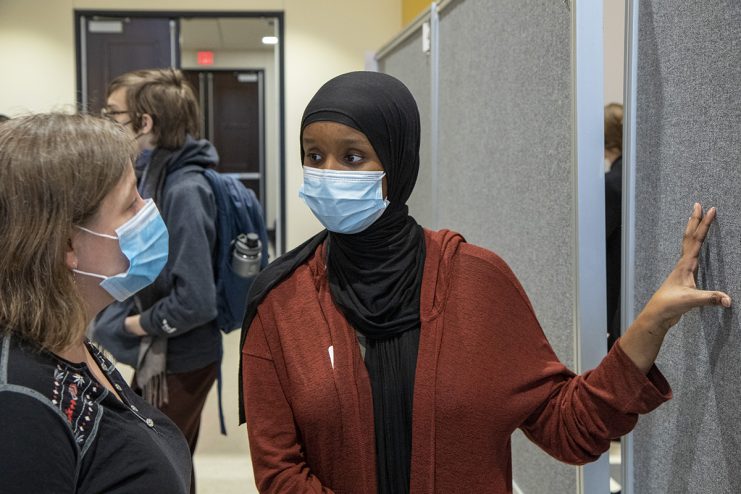 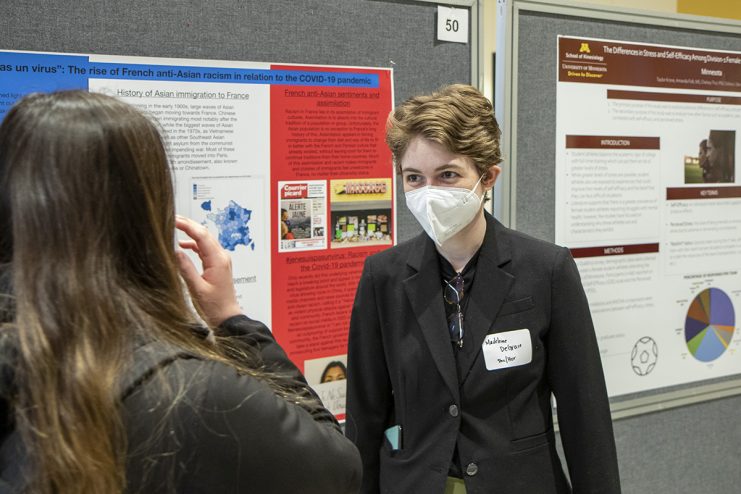 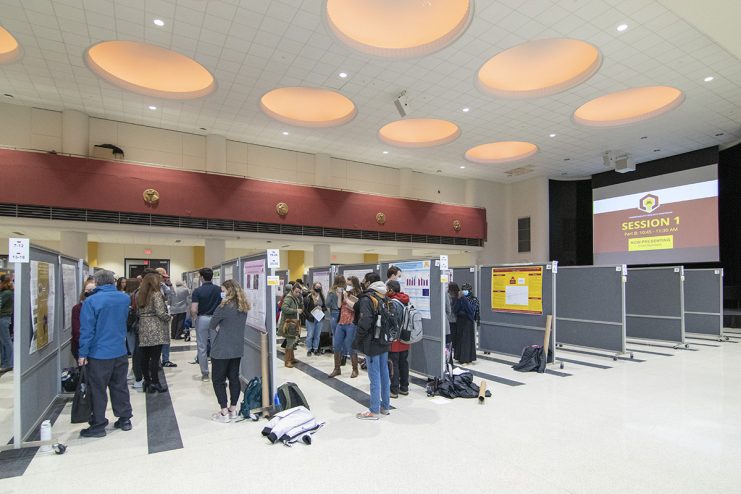 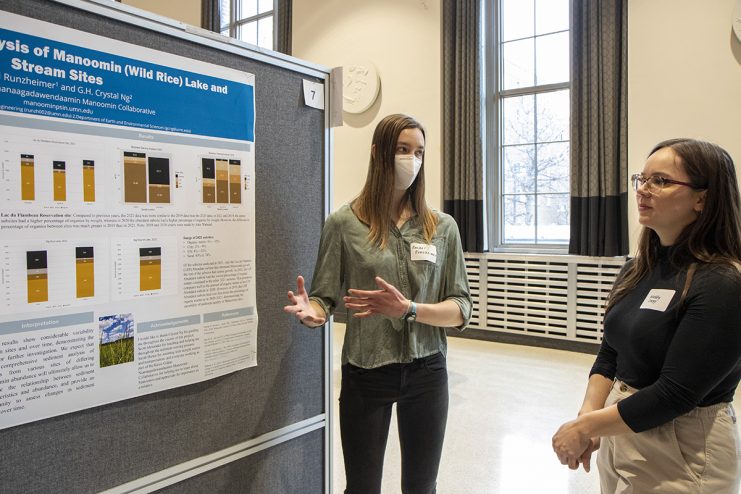 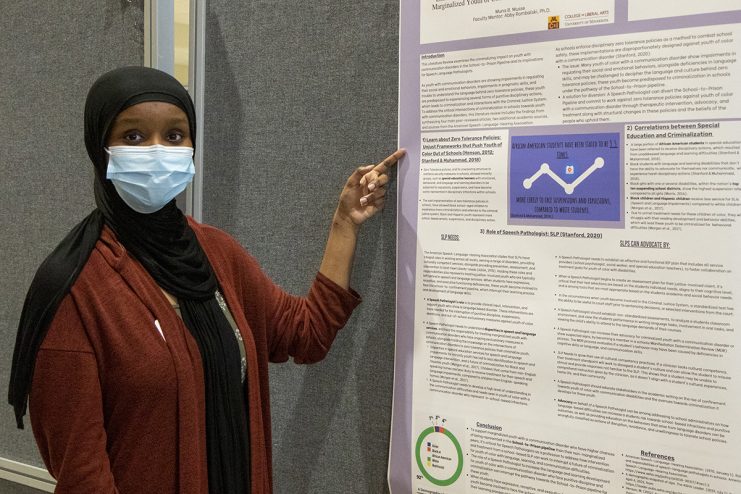 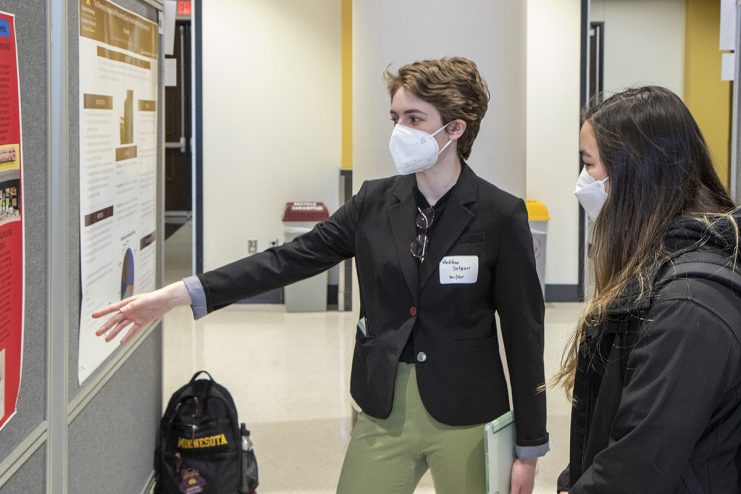 Researching the acceptability of a new intervention to equip Somali American youth to better resist media-fed temptations  to indulge in fatty snacks, salty chips, and sugar-laden pop was the focus of Salma Ibrahim’s poster for the Undergraduate Research Symposium.

A junior, Ibrahim is a valued member of a research team that includes faculty advisor Gail Ferguson, an Associate Professor in the Institute of Child Development, graduate student Tori Simenec, herself, and another undergraduate Research Assistant Leylo Abdirizak, along with other students.

The Undergraduate Research Symposium is an annual event that gives all U of M undergraduate researchers a chance to share their research projects with the University community.

While developing her literature review, Ibrahim first consulted Google Scholar. Once she found an interesting article, she would turn to the online resources of the U of M Libraries, which added much more useful information, links to other relevant articles, and general reference help. Thus, the Libraries were useful to her in establishing a foundation for her project.

Ibrahim received a UROP scholarship to support her research. The team delivered the Somali American version of the JUS Media? Global Classroom intervention to 135 school-age teens, both girls and boys, enrolled in a Minneapolis Somali American charter school, from whom they gathered feedback and shared media literacy skills.

Ibrahim is excited that the research indicates that country of origin and gender may not be as pertinent as age of the youth and their identification as Somali in terms of how acceptable the students found the curriculum. In reference to the fact that Somali American students liked the program regardless of whether they were born in The United States or not, Ibrahim said: “This program could be generalizable!”

Neel Puri investigated the science behind estimating and  measuring the placement for impact of “cable-drawn parallel robots” — think of those above-field sky cams that capture so much action during football games. His main connection to the Libraries was contacting the Borchert Map Library to print his large-scale poster. He was just a little disappointed that he could not embed a video on his poster. Our estimate: Just wait a few years!

Early encouragement paid off in developing a research focus for Muna Musse (pictured with her mentor Abigail Rombalski, PhD, who is a lecturer in CEHD’s Department of Curriculum and Instruction). The two met when Musse was still in high school; she’s now a sophomore with enough credits to count as a junior. “My voice isn’t enough,” was the quote atop the poster Musse created about her research connecting speech pathology and the school-to-prison pipeline. Projects like hers are featured in A YPAR Project Magazine about Centering BIPOC Youth by Abigail Rombalski – Issuu, which can be found online.

Anish Sethi studied a group of people with ALS, amyotrophic lateral sclerosis, with mentor and faculty partner Dr. Samuel Maiser, neurologist and palliative care specialist at Hennepin Healthcare and HCMC. Sethi met Maiser while shadowing him for a day, as part of the preparation for medical school.

“Many things can go wrong with the body,” Sethi explained to this reporter. He then dived into the details: clumping proteins that contribute to ALS, a “disease-modifying” medication used to block ALS-causing proteins, and  testing a theory that the female hormone estrogen might have a neuro-protective effect. An undergraduate senior with his eyes set on medical school, he has a meeting scheduled with a Health Sciences Librarian in the coming weeks. Currently ALS has no cure.

“Je ne suis pas un virus,” wrote a French person of Asian heritage, which Madeleine DeGrace chose to highlight on her poster about anti-Asian racism. DeGrace is a double major in French and History. She heavily used the Libraries’ online resources to research and then create for a French history professor an annotated bibliography on anti-Asian sentiment in France.

Talking with her friend Harriza Mohamed, she noted that although there have been ongoing Asian diasporas to France from what is now present-day Vietnam, China between the world wars, and former French colonies, the French government “doesn’t take race into account when doing the census.” So there is not an exact number known of people of Asian heritage.

She added: “Anti-Asian sentiment reached a peak during the pandemic [in France]. Then the French government fought it —and knocked it down.” Five teenagers, for example, were prosecuted by the government for racist tweets. The media, too, were chastised  for how they initially wrote about the pandemic. Her poster featured an image of a front page of the popular newsmagazine Courrier Picard, with a bold headline “Alerte Jaune” (Yellow Alert).

Mohamed commented that he has been her friend for quite a while but this was the first time he had heard her explain her research.

That’s one of the great things about the Undergraduate Research Symposium — researcher’s ideas are exposed to a variety of people, from fellow students, to mentors, to faculty. The students gain confidence and efficacy in speaking about their work — presenting got easier with each iteration, noted one researcher. And knowledge is expanded by a variety of people following their passion to know more and to understand more deeply: Everyone benefits.