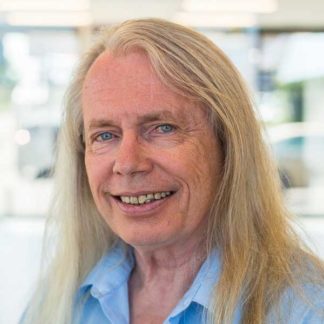 Politics called to Gary Peterson first. When he was 6 or 7, he accompanied his dad delivering flyers encouraging people to vote for the school bond levy. “It doesn’t seem like much now,” his dad said, “but once they build that school over there, you can say you had a hand in doing something about it.”

Many years later, something much different than anything he had experienced growing up in the still-raw suburb of Fridley caught his imagination. This passion ultimately connected him to special collections in the Elmer L. Andersen Library and to the Friends of the University Libraries.

Peterson was 18 when he walked into Hubert H. Humphrey’s campaign office in downtown Minneapolis for his comeback run to the Senate. He quickly became one of the managers of volunteers, sending out people to do advance work distributing buttons and posters prior to the candidate’s appearances in parades and at county fairs. Peterson had taught himself to type speedily and accurately and was good at keeping track of details.

When Humphrey returned to serve in the Senate, Peterson applied to go, too. In Washington, he worked in “the nerve center, where the mail comes in and goes out. Keeping track of all of that before we had centralized databases was a major thing.” When Humphrey ran for the presidential nomination again, Peterson joined that campaign. McGovern ended up being nominated in 1972 and Peterson returned to Minneapolis to work in a major law office. Starting as billing clerk, he became office manager.

“Every student who comes through the place is a life-long walking ambassador for knowledge and critical thought,” — with the help of the University Libraries and their Friends.

He also managed some local political campaigns and even ran for the Minneapolis City Council himself.

“I think everybody ought to run for public office at least once,” he says. “It’s one of the best educations I’ve given myself.”

Going door-to-door, he encountered a buttoned-up house where he thought no one was home. Still he knocked and a couple let him in. They needed to talk about their son who had died in Vietnam, even if a city council person would not be able to help. “That crystalized for me the deep connection that there is between the citizenry and the people who are elected,” Peterson says.

He was not elected and so continued with the law office, doing discovery work for a nationwide lawsuit.

“I was going to companies and rummaging around through their books and records,” Peterson says. “That gave me a lot of insight into how business worked, how it was organized and structured — all the elements of a corporate entity.” He also had come out as gay and was co-hosting the Fresh Fruit radio show on KFAI-FM.

Yet, after a dozen years working in legal and political circles, Peterson was finishing his bachelor’s degree in Psychology at the University of Minnesota and looking for something new. He had started taking dance classes, at the U and elsewhere, attracted by the beauty and the physicality of it. “We go through life in movement,” Peterson says. “So discovering dance was owning the full embodiment of your being and being free to move through the world in new ways.”

Dance “also represented something other than the life of the mind,” he says, the clash of ideas that is a focus of politics and law.

He had always wanted to do something entrepreneurial.

“I came upon Zenon Dance Company and School; they were struggling along mightily,” Peterson says. He was bringing with him administrative savvy, media experience, understanding of business, and some savings. He signed on as co-manager for one year and ended up staying five.

Then he became the first administrator for Zorongo Flamenco Dance Theatre — until a housemate of he and his partner, James Davies, was diagnosed with AIDS in late 1992 and Peterson stopped working to help manage his round-the-clock care.

After their friend died, Peterson planned to take a marketing job in a different field. But the manager for the James Sewell Ballet was going back to school: Did he want to interview for that job? After initially speaking to them only to brush up his interview skills, he decided he wanted the position, re-interviewed, and ended up working there for 13 years.

In 2009, he joined the board of directors of Ananya Dance Theatre; when their program director left in 2013, he decided to give it a try and became Managing Director.

“It’s kind of grown and blossomed,” he says. “It has become a really good thing for me and them.”

Under founder Ananya Chatterjea, the company has combined traditional Indian dance with martial arts and Vinyasa Yoga, focusing on social justice, BIPOC women, womxn, and femme artists. Ananya Dance Theatre has traveled overseas to five countries and to sites around the United States.

“Everything is very nuanced and calculated,” he says. “In the performing arts, there is striving for that synergy, that generation of heat where everything comes together and touches the sublime and the sacred.”

Last month, the Ford and McKnight Foundations chose 10 Minnesota organizations as regional cultural treasures — and Ananya Dance Theatre was one of them. Over the next few years, they will have $625,000 to invest, a welcome gift after the pandemic hiatus. And the troupe has tours lined up into 2022.

Dancing into the Libraries

“Gradually over time, I became more involved in inviting, enticing, being a nuisance to dance companies to get their stuff over [to the Libraries archives].”

Peterson was introduced to archives during his time in Humphrey’s office, because he periodically would ship records to the Minnesota Historical Society. Then, while at Fresh Fruit radio, he interviewed Jean-Nicklaus Tretter, whose St. Paul apartment was crammed with materials that would become the start of the Tretter Collection in Gay, Lesbian, Bisexual, and Transgender Studies at the University Libraries.

His connections through dance then drew him closer to the University Libraries. A friend in dance, Patrick Scully, donated his records to the Performing Arts Archives at the University. “He arranged for a number of his friends to explore the caverns under Andersen Library,” Peterson says.

Later, John Cowles, former publisher of the Star Tribune newspaper, invited Peterson and others to meet with him while he had a residency at the Humphrey School. Cowles wanted to bolster the dance collections within the Performing Arts Archives at the University.

“Gradually over time, I became more involved in inviting, enticing, being a nuisance to dance companies to get their stuff over there,” Peterson says. The last two major pieces, from Ragamala Dance Company and Zorongo Flamenco Dance Theatre, were put in place a year ago.

Peterson knew people on the collections staff and then was introduced to the Friends of the University Libraries by Karen Koepp, now retired from the Minnesota Orchestra’s public relations department. “It sounded like it would be a pretty cool thing to do for a couple of years,” he says.

It’s been five years so far. He now serves on the nominating committee and has served on and co-chaired the programming committee.

In considering who to invite, the Friends programming committee must balance several questions, including fees. “The purpose isn’t all for glitz,” Peterson says. “It’s to combine the resources of the libraries and not just to the students but to the entire state.”

The Friends aim to contribute to people’s intellectual development.

“Every student who comes through the place is a life-long walking ambassador for knowledge and critical thought,” Peterson says — with the help of the University Libraries and their Friends.