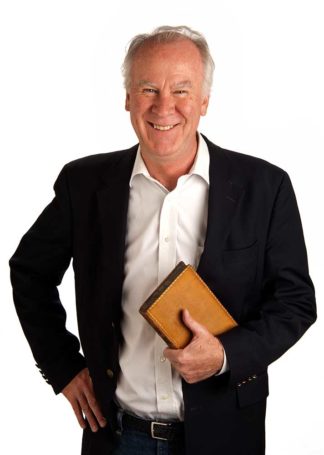 Patrick Coleman’s love for Minnesota history started early — he was already collecting books on the subject while at the University of Minnesota. “It feels like I was born to do this job” of Acquisition Librarian at the Minnesota Historical Society. But it might not have happened without the University Libraries.

Coleman was a student worker for Minitex and the head of Minitex at the time, Alice Wilcox, knew of his passion for Minnesota history. So he was designated to retrieve items from the Minnesota Historical Society’s library twice a week.

“My predecessor was seldom in, so I’d sneak into his office, sit at his desk, and read through auction catalogs and rare book catalogs from around the world,” Coleman says. “I thought, ‘Someday I’m going to have this job.’”

When a position opened, the Minnesota Historical Society staff knew him, and he left Minitex behind. But not his love for libraries or appreciation for the University Libraries.

Asked to name his top three Minnesotans after more than 43 years at the Minnesota Historical Society, Coleman laughs. He knows so many. He first cites Ignatius Donnelly, a politician and writer. “He was a Populist leader in the 19th century, and at the head of every one of the third-party movements,” Coleman says. Secondly, he names Floyd B. Olson, a leader of Coleman’s admired Farmer-Labor Party, who served as governor from 1931 to 1936.

For his third, Coleman chooses Sinclair Lewis: “I’ve been a fan of his for years.” In addition, the Minnesota author has absorbed his energies for the last two years while Coleman was preparing a major exhibit that opened recently at the Minnesota Historical Society.

The novels of Sinclair Lewis (1885-1951) still have something to say to 21st century audiences, Coleman says.

“And he can still be very entertaining for a 21st century audience,” he adds. “His satire and his wit are very humorous, but he also has points to make.”

Some of those points may be feminist — “he referred to himself as a suffragent,” Coleman says. Other targets arose in the realm of politics.

“Something we’ve thinking about a lot lately is our fragile democracy,” Coleman says. “In his book ‘It Can’t Happen Here,’ Lewis speculates what would happen if an authoritarian president ends democracy in America. Some of those passages are so prescient, too. While I was watching the attack on the Capitol on Jan. 6, it was like reading a passage from ‘It Can’t Happen Here.’”

An epidemic is a major part of his novel “Arrowsmith,” with similarities to our pandemic experiences in the last 18 months. “Parts of his book read like last year’s newspaper headlines,” Coleman says.

Lewis also dealt with racial equity in his book “Kingsblood Royal,” in which the main character traces his genealogy and discovers he’s 1/32 African American. “He embraces that,” Coleman says. “He loses friends and jobs and country club membership and everything else.”

When Coleman was in high school and college, Lewis’s books were mandatory reading. “I’m saddened by the fact that people aren’t reading him anymore and enjoying his critique of American society, because it’s still valuable.” Coleman recommends “Babbitt” as one of his better books. And, he says, “I think every Minnesotan needs to read ‘Main Street.’”

Looking ahead to retirement, Coleman is reflecting on his work with the Minnesota Historical Society. “The fun part of the job has been to acquire some extraordinary things and preserve them for posterity.” He purchased the entire correspondence between Sinclair Lewis and George Lorimer, the editor of the Saturday Evening Post.

“This correspondence is just really rich and full of his character and his personality,” Coleman says. “It says a lot about how he made his living as a writer” selling short stories before he had his breakthrough with ‘Main Street.’”

A couple of other recent purchases are significant: an 1838 manuscript map of the Ft. Snelling reservation and the Treaty of Washington of 1858. “This is a hand-written treaty between the United States of America and the Yankton Sioux,” Coleman says. “It’s a really important and poignant document.”

In his personal book collecting, he switched from Minnesota history when he got the job at the Minnesota Historical Society to his “second greatest love,” Irish history and literature. “I have all the books of the Cuala Press, a fine private press that was started in 1903 by the two sisters of W.B. Yeats,” Coleman says. “This was an all-female-run private press during that Arts & Crafts era. The books are simple and beautiful and readable.”

Giving back through the Friends board

In retirement, he looks forward to doing more with the Friends board. “These are the smartest and most interesting people in my life. I can’t tell you how fun it is to spend time with these fellow board members.”

Coleman is serving his second stint on the Friends of the University Libraries board. When he was asked the first time, he didn’t hesitate to say yes. “I can’t conceive of my life without the University library,” he says. “It was my job all through my student years. Even before that, as a high school student, I spent a lot of time in the stacks . . .. How magic it was to walk down the stacks, what serendipity to pick a book off the shelf that I never would have found otherwise. It added some excitement and meaning to my life.

“I wanted to support the library and the work that they do,” he says. “I wanted to give back a bit because it’s given me so much.”

He also remembers his great mentors at the U — Hy Berman in History and James Youngdale in American Studies. “Between the University and the University Libraries,” he says, “I can’t think of anything that’s been more important in making me who I am.”