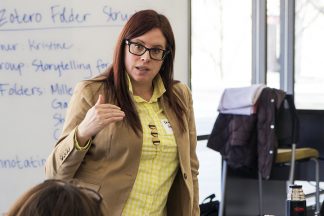 Influenced by environment, tools, and practitioners, researchers cannot be entirely objective. In the health sciences and social sciences, for instance, the origins of data and the language used to describe findings may rely on an unacknowledged concept of whiteness as the norm.

George Floyd’s murder last summer caused some researchers to look for a new direction. Faculty researchers approached Public Health Librarian Shanda Hunt about how to incorporate into their work scholars who are Black, Indigenous, and People of Color (BIPOC). It was tough trying to help the faculty, however, because she and her colleagues found that curated lists of BIPOC authors are rare.

“That’s disappointing,” Hunt says, “in a time when incorporating anti-racism research  into their current research is really important.” In response, she joined with two others to develop the research guide Conducting research through an anti-racism lens, which has just been published.

Conducting research through an anti-racism lens

The team behind the research guide has its roots in another response to Floyd’s killing: the Libraries’ Anti-Racism Reading Group. Hunt and Social Sciences Librarian Amy Riegelman were together in small group discussions and started talking about their challenges, Hunt says. “Off the cuff, we just started talking about racism in search strategies, racism in the Libraries cataloging systems, racism in algorithms.”

She adds: “We thought it would be helpful to make a library research guide on some strategies for mitigating these racist systems.” They asked intern Sophia Myers-Kelley, who has social justice experience through her work with Women Against Military Madness, to join them in the project.

“A lot of my work that is separate from librarianship is about intersectionality and recognizing perspectives that are different than the one that you live with,” Myers-Kelley says. Intersectionality, a word coined by Black feminist scholar Kimberlé Crenshaw in 1989, is defined by Merriam-Webster as “the complex, cumulative way in which the effects of multiple forms of discrimination (such as racism, sexism, and classism) combine, overlap, or intersect especially in the experiences of marginalized individuals or groups.”

Myers-Kelley added that they entered the project with “a humble perspective of wanting to listen and follow the leadership of other people who have a better perspective of racism than I do as a white person.”

“Off the cuff, we just started talking about racism in search strategies, racism in the Libraries cataloging systems, racism in algorithms.”

The research guide, for example, suggests as a method to de-center whiteness that researchers look at whether their research is WEIRD — not representative of the majority of populations because it was conducted in societies that are: Western, Educated, Industrialized, Rich, and Democratic.

The team points out several critiques of WEIRD. They also offer questions to de-center that status quo, such as: “As a researcher, are you making an effort to bridge the cultural gaps between researcher(s) and communities of color?”

Included are approaches to primary and secondary research, ways to mitigate the racism of scholarly publishing and search algorithms, and links to additional resources, such as a racial equity toolkit. It’s an extensive guide.

Learning from the research guide could include gaining individual insights. “We tried to provide as much context as we could about what personal work needs to go on before approaching any anti-racism endeavors,” Hunt says, “before trying to force it into an existing workflow.”

It’s a living guide, Riegelman says, that may be modified by feedback going forward. A dozen librarians already have provided feedback. The team is “constantly making sure the language and the scope are appropriate,” Myers-Kelley says. “I’m a nonbinary person who is disabled and queer but that doesn’t make me understand what being Black is like or being Indigenous. We try to be extremely self-aware of where we have expertise and where we can learn more.”

At the bottom of the page, they describe themselves as three white-identifying people working at a U.S. research library. “Ours is not the only perspective,” they say in the guide. Myers-Kelley says: “How can we make sure that the work that largely white librarians and staff are doing “lifts those [other] perspectives and encourages an intersectional approach where everyone is experiencing equity?”

One way is to invite input, so that this living guide can continue to grow in usefulness. And they plan to share it beyond the University of Minnesota, because these are strategies any researcher can use.

He burns the midnight oil