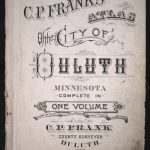 C. P. Frank’s Atlas of the city of Duluth, Minn., (1902) is a rarity. There are only five other copies in WorldCat. The atlas depicts Duluth in the middle of a population explosion (as a boom town, having increased by a factor of 10 between 1880 and 1890, Duluth then tripled in size between 1890 and 1920). Images 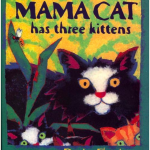 “Mama Cat Has Three Kittens”: The Kerlan collection is the perfect home for this unique piece of original art from “Mama Cat Has Three Kittens.” Artist Denice Fleming is a Caldecott honoree whose vibrant dimensional work is like no other. She has developed a technique of pulp painting. Cotton rag is beaten to a fine pulp and suspended in water. Chemicals and pigments are then added to create the paint she decants into squeeze bottles that serve as the brushes; hand-cut stencils serve as her underdrawings. The paintings are slowly layered in a painstaking process until she achieves her finished picture that is then pressed and dried. Fleming says: “It’s wet, messy, and wonderful. . . . There is always an element of surprise in pulp painting, as I cannot completely control the blending of color and fiber. Each fiber retains its individual color — this, and the layering of fiber, create a feeling of depth in the finished painting.” Image

James Freeman Clarke was a theologian, author, and abolitionist, who campaigned for the rights of women to gain an education. He suggested to Julia Ward Howe that she write new lyrics for the song John Brown’s Body, which resulted in The Battle Hymn of the Republic. Inscribed by Clarke to a member of the Boston Female Anti-Slavery Society: “Louisa Loring, with love — from her friend, James F. Clarke. Jan. 1st, 1868.”

An uncommon offprint including a memoir by Dunbar’s wife, Alice Moore Dunbar.

Leroi Jones’ (Amiri Baraka) short plays were performed in various combinations, at many venues, often to much controversy, but curiously, these two plays seem seldom to have been performed together, except, possibly, at Concept East Theatre in Detroit in December 1965 or January 1966, during which time the theater was shut down for obscenity and, at least temporarily, lost its license to hold performances.

R. J. Kern is an American artist, living in Minneapolis, whose work explores ideas of home, ancestry, and a sense of place through the interaction of people, animals, and cultural landscapes. Kern’s artist’s book resulted from the commemorative artwork commissioned for the 2019 Minnesota State Fair. The classic photographic process includes both hand-coated salt prints and contemporary salt prints over archival pigment prints of the State Fair winner animals. This new acquisition to the Francis V. Gorman Rare Art Book and Media Collection at the University Libraries becomes part of the growing and deep collection on photography and local artists.

Noted on Art Hounds for the exhibition Stamped and Posted, this collection of art created by artists globally relied on the postal system. The acquisition for the Francis V. Gorman Rare Art Books and Media Collection complements the existing zine collection and very rare Fluxus materials.

The Ukrainian Famine Survivors in Minnesota oral history project records are now available at the Immigration History Research Center Archives, and the videos (and their transcripts) are available via UMedia. The collection guide, with more information and a link to the videos, is available online.

Born in Romania in 1930, Michael Lupu served as a senior dramaturg for over three decades at the Guthrie Theater. Before coming to the United States, Lupu worked with Liviu Ciulei (Guthrie Theater Artistic Director 1981-1985) as a dramaturg at the Bulandra Theatre in Bucharest. Lupu arrived in the Twin Cities in 1981; he first worked in community outreach for the Guthrie and then joined the theater’s literary department. In 2006, Lupu won the Lessing Award, dramaturgy’s highest honor. Lupu spoke at least seven languages, including Russian and Yiddish. Michael Lupu died in Minneapolis in 2019. Donated by Robert Corrigan, his dramaturgical papers include notes, notebooks, correspondence, production files, screenplays, photos, playbills, and other documents related to his work at the Guthrie Theater.

Bedlam Theatre was founded in 1993 by Maren Ward and John Bueche. After an 11-year stint at a small studio space in the Cedar-Riverside neighborhood, the theatre relocated to Lowertown St. Paul in 2014. Bedlam Theatre was known for its avant-garde and ambitious productions like the Ten Minute Play Festival, Cedar-Riverside Art Zone for Youth and BOMP! dance nights. Over the years it became a restaurant and bar, a dancehall and music venue, and a community center and theater. Materials from the Bedlam Theatre consist of production files, administrative files, meeting brainstorm documents, personnel files, scrapbooks, restaurant menus, restaurant designs, floppy disks, CDs, hard drives, cassettes, VHS tapes, and much more. Bedlam Theatre closed its doors in 2016. The collection was donated by Maren Ward with assistance from Tim Carroll.

Founded by Ranee Ramaswamy and currently under the leadership of Artistic Directors Ranee and Aparna Ramaswamy and Choreographic Associate Ashwini Ramaswamy (mother and daughters), Ragamala Dance Company is heralded nationally and  internationally as a groundbreaking professional dance company rooted in the South Indian dance form of Bharatanatyam. Ragamala tours extensively and its work has been commissioned by the John F. Kennedy Center for the Performing Arts, Northrop at the University of Minnesota, the Walker Art Center, Lincoln Center Out of Doors, and the  the Arts Center at NYU Abu Dhabi (United Arab Emirates) among many others. The extensive collection contains artistic and administrative files, publicity, education, and audio-visual materials, among others.

For almost 30 years, Camille LeFevre has worked as an interdisciplinary arts journalist, writer, editor, and educator, writing on dance for Dance Magazine, mnartists.org, The Star Tribune, and minnpost.com, among others. She is the author of The Dance Bible: The Complete Guide for Aspiring Dancers, and Charles R. Stinson Architects: Compositions in Nature. She has worked as an adjunct professor at the University of Minnesota’s School of Journalism and Mass Communication and College of Arts and Sciences. Her collection contains research notes, brochures, posters, clippings, books, correspondence, newsletters, flyers, publicity, production files, and audio-visual materials documenting three decades of dance in the Twin Cities.

This collection of films from the communist world reveals war, history, current affairs, culture and society as seen through the socialist lens. It spans most of the 20th century and covers countries such as the USSR, Vietnam, China, Korea, much of Eastern Europe, the GDR, Britain, and Cuba. New is Module III: Culture & Society.

Dance in Video contains dance productions and documentaries by the most influential performers and companies of the 20th century. Selections cover ballet, tap, jazz, contemporary, experimental, and improvisational dance, as well as forerunners of the forms and the pioneers of modern concert dance. Included are videos of key figures and companies in dance such as Alvin Ailey, Mark Morris, Trisha Brown, and, in addition, a collection of ethnic dance from around the world.

Early European Books traces the history of printing in Europe from its origins through the close of the 17th century. Newly added collections are on French Culture in the Early Modern Period and Statecraft and Law in Early Modern France.

Die Musik in Geschichte und Gegenwart (MGG) Online is a one of the premiere encyclopedias of music, and the leading German-language resource of its type. MGG offers in-depth articles on every aspect of music, as well as many related topics such as literature, philosophy, and visual arts. MGG Online contains the second print edition of MGG, published from 1994 to 2008, as well as current, continuous online updates and additions.

High-quality scans of historical American jazz periodicals are available through RIPM (Le Répertoire international de la presse musicale). RIPM  was founded in 1980 under the auspices of the International Musicological Society (IMS) and the International Association of Music Libraries, Archives, and Documentation Centres (IAML), with a mission to preserve and to provide access to 18th-, 19th-, and 20th-century periodical literature dealing with music, and to facilitate and encourage research based on the press. RIPM Jazz Periodicals currently contains 105 jazz journals, covering the period from 1914 to 2006.

The Business & Management Collection contains over 1,100 multimedia lectures, case stories, and industry insights by leading experts from academia, industry, and commerce. The collection is categorized into six broad subject areas, within which there are over 90 lecture series, each curated by series editors who are experts in their fields. The collection is updated monthly.