The Tretter Collection in GLBT Studies at the University of Minnesota has just released the first 20 interviews from Phase Two of the Tretter Transgender Oral History Project (TTOHP).

Started in 2015 to document the diversity and breadth of transgender experiences, the Tretter Transgender Oral History Project entered this new phase with Oral Historian Myrl Beam, who came on board in July 2019.

“This second phase of the project is focused on trans activism,” says Beam, who has been involved with trans activism for many years and is a trans studies scholar. For the past year, he has been interviewing activists at the front lines of social change work focused on trans liberation. In a society in which too many trans people are murdered, he says, these are “people who are imagining a world that is not just safe . . . but a world in which trans people are valued.” 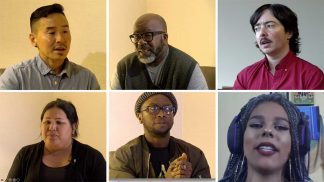 The activists featured in Phase Two of the TTOHP are working to overcome barriers that trans people experience in the areas of housing insecurity, police violence, health care, and other justice issues. They are spread out around the United States. By the time this second phase concludes in June 2021, Beam will have conducted a total of 60 interviews — all of which will be freely available on the Libraries’ UMedia digital collections website.

While about half the interviews he has conducted so far were done in person with Beam behind the video camera, with the onset of COVID, he also had to overcome the barriers imposed by shelter in place requirements — with Zoom, of course.

“I missed the energy,” he says, but the interviews were better than anticipated. And Beam can now interview people from all over the country. Of the Zoom interviews, he adds, “it’s a time capsule, documenting a moment.”

All of the newly available interviews are remarkable; but he says a great place to start is with three in particular: interviews with Black trans femme activists Diamond Stylz and LaSaia Wade, and immigrant justice advocate Ola Osaze.

Ola ”is an amazing storyteller and connects his own life experiences with the experiences of those who are detained.”

Beam also recommends watching for a new episode of the Tretter’s podcast “Transcripts” in January, focused on trans experiences in the South. “Transcripts” is a podcast intended to share the oral histories in a curated, bite-sized fashion with a broader community of listeners. You can listen to its first episode, which was released last June, on the “Transcripts” website.

The 20 newly released oral histories — videos and transcripts — from the Tretter Transgender Oral History Project can be browsed or searched online via the Libraries UMedia website. (The entire repository of interviews contained in the TTOHP collection is also available online.)

Interviewees include activists, organizational leaders, health-care providers, legal workers, grant-makers, members of the clergy, and others, according to a statement from the Tretter Collection in GLBT Studies, “working to build new, more fabulous worlds for trans people.”

Among  these are interviews with:

Additional interviews will continue to be added to this collection in the coming months; stay tuned for future announcements.

He burns the midnight oil