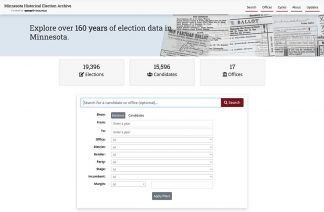 As we look forward to a presidential election this November, we may also want to gain insights from past elections. We now have a new tool, the Minnesota Historical Election Archive, published by the U of M Libraries Publishing Services and curated by Eric Ostermeier, researcher in the Humphrey School for Public Affairs.

“We are excited to maintain the partnerships we have with Eric and the Humphrey School of Public Affairs,” says Shane Nackerud, Co-interim Director of Content Services. “We’re excited to partner with departments and units on campus that want to do this kind of work.”

Smart Politics: Roots of the archive

The partnership began in 2006 when Ostermeier and the Libraries began working together on Ostermeier’s Smart Politics — a blog that became what Nackerud calls a “dynamic scholarly serial.” Ostermeier bases his nonpartisan reports on data and history, which he says grew into a new category called “data journalism.”

While Ostermeier early on was already envisioning this election archive, the UThink platform that then hosted it was not robust enough for it, says Nackerud. When the Libraries switched from UThink to WordPress, Ostermeier again brought up his vision. After much discussion with Nackerud and other Libraries staff, it was decided that more expertise would be needed to build the archive. With input from Nackerud and others, Ostermeier applied for and received a grant from Minnesota’s Arts and Cultural Heritage Fund through the Minnesota Historical Society.

The archive and its users

Using the archive, one could find that the first known gubernatorial vote for a woman in Minnesota was cast in 1861.

Featuring a centralized, relational database, the archive also has notes about electoral firsts and candidate biographies that Ostermeier has gathered from elections for 17 federal and state offices over the years, as well as links to Smart Politics reports.

“This is not a data dump,” Ostermeier says. “This is a means by which people can do their own research but also includes a lot of research that I’ve done within the archive itself.”

Using the archive, one could find that the first known gubernatorial vote for a woman in Minnesota was cast in 1861: a write-in vote for journalist and abolitionist Jane Swisshelm. That’s among the results of nearly 20,000 elections since statehood included in the archive.

Ostermeier anticipates several groups of election archive users. Media, who have used his material from Smart Politics “thousands of times over the years,” Ostermeier says, clearly could benefit by tapping into the state’s rich history, which includes third party politics and high voter participation.

Scholars of political science and history may find research resources as well. For example, not only could they address questions about incumbency advantages but also about gender in politics. Citizen researchers also could better inform their research. And schoolteachers for young people in grades 7 though 12 can discover relevant material for civics or history classes.

“I hope it makes a big splash,” Nackerud says. “I hope people from schoolchildren to journalists to faculty, people at different higher education institutions — I hope they all are able to use it and get something out of it. “