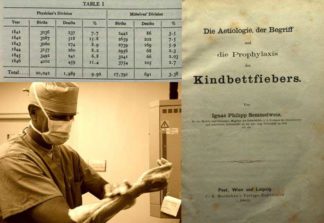 Handwashing is key to deterring the spread of disease. We all know this now in the face of fighting COVID-19. And it is hoped that we all do wash our hands often and well to fight diseases.

But it was not always so.

As celebrated in a Google Doodle and reported by Newsweek on March 20, it was only in the 19th century that a Hungarian obstetrician, Ignaz Semmelweis, studied and published on the importance of handwashing for the health of new mothers and, ultimately, all of us.

The U’s Wangensteen Historical Library of Biology and Medicine has a rare copy of the results of his study of maternal health, The Etiology, Concept, and Prophylaxis of Childbed Fever. There were two maternal wards in the hospital where Semmelweis worked: one staffed by midwives and the other by physicians.

Semmelweis noticed that the rates of fever, which was likely brought on by infection, were much lower in the midwife-staffed ward than in the physician-staffed ward. Studying the differences between the wards, he noted that midwives washed their hands and equipment between patients, which the physicians did not do.

He published the results of this research in 1861, recommending that handwashing could help stem these often-fatal infections. Unfortunately, many doctors resisted the proposed change in practice.

“Semmelweis was like a lot of pioneers: People didn’t believe him,” she says. “It fell to other people to move that research forward.”

Like Semmelweis, U. S. surgeon Oliver Wendell Holmes Sr. advocated for sanitary surgical techniques while treating the same disease of childbed fever, but his piece was published in a little-known journal and also went unheeded. Then, physicians like Joseph Lister took up the banner and successfully publicized ways to combat the spread of germs in hospitals and in homes.

One result of his work? The well-known germ-fighting product Listerine.

The roots of Semmelweis’s research

The library also has an even rarer Semmelweis publication because of the international reach and philanthropy of library founder Dr. Owen H. Wangensteen. The Wangensteen Library is fortunate to own one of only two known copies of Semmelweis’s doctoral thesis, Tractatus de vita plantarum; dissertatio inauguralis (1844). The other copy is at the Semmelweis Library in Budapest. Semmelweis wrote his dissertation on the then-popular theory of vitalism, the life force in plants.

The copy of Semmelweis’s thesis arrived at the University shortly after WWII as a thank-you gift to Wangensteen, who was Chief of Surgery at the Medical School for more than 30 years.

Following the war, Wangensteen and 19 other gastric surgeons pooled their resources and sent $2,000 to aid the widow of an eminent Hungarian gastric surgeon, Eugern Polya (1876-1944), who had been executed by the Nazis. In gratitude, the widow, who was living in Sydney, Australia, sent Semmelweis’s dissertation to Dr. Wangensteen.

During his lifetime, Semmelweis not only was not celebrated but also he was reviled, resented, and not re-appointed to his position at Vienna’s General Hospital. He died at 47 in a mental hospital.

Yet, because of his studies — and the work of those who followed him — the importance of handwashing, and germ theory itself, became widely accepted. And so in our lives and in our homes today, we are better equipped to cope with the threat of the coronavirus.