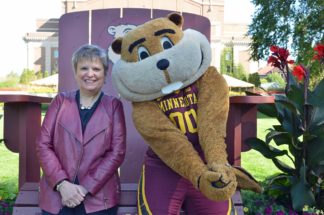 Wendy Pradt Lougee is retiring February 27 after more than 17 years as University Librarian and Dean of Libraries. Previously, she spent 20 years at the University of Michigan with earlier appointments at Brown University and Wheaton College in Massachusetts.

Throughout her career, Lougee has been at the forefront nationally —  developing a number of programs, initiatives, and policies that have revolutionized academic librarianship, particularly in the area of innovation and technology, which earned her the American Library Association’s prestigious Hugh Atkinson award. She holds a B.A. in English (Lawrence University), an M.S. in Library Science (University of Wisconsin), and an M.A. in Psychology (University of Minnesota).

Recently, I sat down with Lougee and asked her to reflect on her career.

What are you most proud of during your career?

I was at the University of Michigan at ground zero, if you will, of the digital era. In the early 1990s I was asked to step aside from my position as director of the main library at Michigan, and take a year off to work on creating a digital infrastructure for information. This was a time when the World Wide Web was an early concept and access to computer networks and digital content not widely available. Technology changed and was adopted rapidly and that one year turned into eight years. It was a pretty heady time, with federal and foundation funds flowing in support of innovation in the digital arena, and I was fortunate to be engaged in some phenomenal projects and work with talented faculty and staff from multiple disciplines.

Opportunities included early work with large scale digitization, which later became the Google Project. The Mellon Foundation came calling, and asked us to help create something called JSTOR, which is now a huge journal archive — that every undergraduate on this campus and others, I’m sure, has at the top of their go-to list.

In coming here to Minnesota, I didn’t want to just recreate what I had done at Michigan, but rather to think about what was distinctively important and possible here. Michigan was focusing much more on building digital technologies and the production capacity. At Minnesota, I wanted to work on building capacity to reach out and engage the campus, leveraging the potential of technology to bring greater access to library resources. “Job one” was to put organizational structures in place to share our expertise and improve our capabilities to deal with technologies.

The mantra was much more about how to weave the library into the fabric of the campus. To have our content and technologies get in the workflow of faculty and students, to have our library experts partner with faculty in education and research.

I’m very proud of what we have accomplished at Minnesota — which has resulted in two national awards. In 2009, we received the Library of the Year Award from the Association of College and Research Libraries, and in 2017 we were awarded the National Medal for Museum and Library Service.

What has been the most challenging issue?

The better we get at delivering information virtually through the internet, the more invisible we can become. We spend millions of dollars to license and make accessible digital content, but it appears free to users. And as I think about some of our newer programs — where we’re fundamentally building on our core expertise — it’s not obvious to others why the library should be involved or lead.

For example, with data management, it’s often asked, “Why aren’t the technologists, the central IT unit, doing that?” Well, we understand how data are structured, how data can be shared for reuse, information standards, those sorts of issues.

Similarly, on issues associated with the rising costs of higher education, libraries have a huge role to play in helping find affordable course content. With curriculum, many assume that faculty teach students how to effectively find and use information, but we play a key role in helping students learn research and critical inquiry skills.

So, when someone says, “Why the library?“ there should be an obvious answer to that. There isn’t always the recognition that our core expertise in creating, structuring, sharing, and making content accessible is transferable in the digital realm.

Is there anything that you weren’t able to complete?

One outstanding issue that remains on the list relates to our capital infrastructure. When I arrived in 2002, the University had just finished building Andersen Library for Archives and Special Collections, including the collections storage caverns beneath Andersen. The University also had completed a beautiful renovation of Walter Library and a new Architecture Library.

So, I thought we were sitting pretty, in terms of space and capital needs. What we didn’t anticipate, was the rapid growth in the collections. Like kudzu, collections filled up those caverns, fast. And then we experienced a change in how library spaces are used; changes in research and learning have created the need for spaces for collaboration and experimentation that have displaced collections. Now, we are awaiting a number of capital projects to reach fruition. Thanks to some generous gifts, we’ve been able to make some significant improvements to existing spaces.

For example, we’ve built a collaboration studio in Wilson Library, a new research center for special collections in Andersen Library, and later this year an innovation and entrepreneurship lab will open in Walter Library. And in 2020 the Health Sciences Education Center will open with a new Health Sciences Library and a new space for the Wangensteen Historical Library.

But two critical projects remain on the wish list: The renovation of the main library — Wilson Library — and a new collection storage facility.

What are the biggest opportunities for research libraries moving forward?

We know individual research libraries can’t tackle many of the problems that they face on their own, so we’ve begun to see projects as opportunities to collaborate with other institutions. The Hathi Trust Digital Library is one example; it preserves and makes accessible the digital copies of library books digitized by Google.

But beyond that, how do we demonstrate the interdependence of these large research collections that have grown around the country? How do we coordinate and optimize our narrowing dollars for content? How do we work together on issues that demand scale?

The Big Ten Academic Alliance is thinking seriously about these issues and asking these questions: How do we make policy decisions about our collections for the future? How do we think about the content itself? Who is going to preserve what? How do we ensure its longevity? Who’s going to digitize what? And then, how do we put the technology infrastructure in place, so that users can search for something, find it, and have it delivered seamlessly. That’s the expectation of today’s consumers who are used to Amazon-like discovery-to-delivery services.

One daunting aspect of the future challenge relates to the huge amount of real estate on campuses. We have 12 libraries. It used to be that when you renovated a library, you maybe refreshed the furniture or added some more stacks. But now we have to think about a wholly different kind of infrastructure — including the technologies and services that respond to contemporary research and learning. This includes everything from data simulation to 3D printing, from digital imaging to text-mining services.

That’s going to be a significant challenge, and also a financial one. It requires an ongoing strategy of capital investment rather than a renovation project every few decades.

What will you miss the most about being University Librarian, Dean of Libraries?

Of course, the people. We have some extraordinarily talented and dedicated staff that keep this place running, keep it connected with the campus, and they’ve been great. Colleagues on campus have been great partners. We have a tremendous organization in the Friends of the Libraries. And finally, as a representative of this great Land Grant University, it’s been marvelous to connect with and meet people around the community and the state of Minnesota.

I’ve also been deeply involved in a lot of national and international committees and boards, and I’m going to miss those connections and networks and opportunities to work on exciting new ventures. And you may find this hard to believe, but I’m going to miss the pace. On any given day, I could be dealing with a different topic every half hour, and I’m guessing that won’t happen in retirement. It will be interesting to see on day one, when there’s not a full calendar, what I do with my time.

What’s next for you?

I have some writing projects in mind, some professional, some more personal. I’ve long thought I’d like to write about my mother, a very interesting woman and a leader in her own way — at a time when women weren’t meant to be leaders, or weren’t allowed to be. She went to University of Chicago, was a journalist, worked in advertising, and did a lot of interesting and impactful things in her life (including possibly working for Houdini, or so the story goes).

So, that’s one possibility. Obviously, more travel. But, I have a friend who says we shouldn’t think about this as retirement, but rather “refirement.” And, in that context, I’m assuming there will be opportunities to join organizations, perhaps volunteer, maybe some Board work and some contributions to the profession might follow as well.

Lougee has served on the board of directors for the:

The award recognizes outstanding achievements in technology, development and research.