The Council on Library and Information Resources (CLIR) has awarded $44,000 to the University of Minnesota Libraries for its digitization project: University Radio at Risk: Digital Preservation Reformatting of Educational Radio.

With the grant, the Libraries will preserve about 2,500 aging reel-to-reel audio recordings through digital reformatting and make them freely available online to researchers and anyone interested in listening to them. The recordings are held in the Libraries’ University Archives.

These recordings represent radio programs produced by the nation’s oldest continually broadcasting, non-commercial educational station: KUOM. KUOM is not only part of Minnesota’s history — it’s also part of the national history of radio in America. 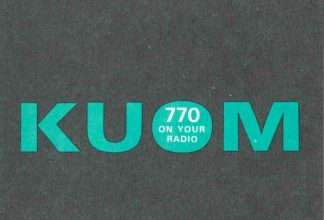 “As a medium, radio had a democratizing effect,” said Erik Moore, University Archivist and principal investigator for the project. “For seven decades KUOM provided listeners across the country access to educational information, political conversations, public affairs topics, and social issues through the National Association of Educational Broadcasters and other distributors — prior to and well after the establishment of the Corporation for Public Broadcasting.”

Once completed, the digitized recordings will be once again shared with national platforms for discovery and dissemination including the Digital Public Library of America and the American Archive of Public Broadcasting.

“Radio played a significant role in daily life prior to the advent of television, the Internet, and today’s social media,” Moore said. “The successful completion of this project will open these audio programs to an international community of scholars researching the influence radio had in our society during an ever-changing twentieth century. We are grateful for this opportunity to further preserve and make available these resources.”

Two previous grants made possible by funds provided by the State of Minnesota from the Arts and Cultural Heritage Fund through the Minnesota Historical Society allowed for the cataloging of nearly 11,000 individual audio reel-to-reel tapes and the digitization of over 2,000 radio programs including the Minnesota School of the Air.

About CLIR and the grant program

The Libraries grant is part of the Recordings at Risk grant program, a national regranting program administered by CLIR to support the preservation of rare and unique audio and audiovisual content of high scholarly value. Generously funded by The Andrew W. Mellon Foundation, the program will award a total of $4.5 million between January 2017 and April 2021.

The Council on Library and Information Resources (CLIR) is an independent, nonprofit organization that forges strategies to enhance research, teaching, and learning environments in collaboration with libraries, cultural institutions, and communities of higher learning. To learn more, visit www.clir.org and follow them on Facebook and Twitter.