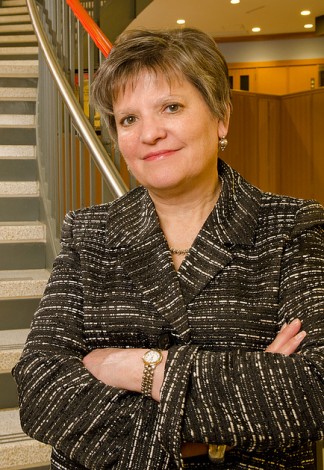 Wendy Pradt Lougee — University Librarian, Dean of Libraries, and McKnight Presidential Professor — has announced her plans to retire later this year, after a successor is appointed.

Lougee has led the University Libraries since June 2002 — overseeing and directing innovations that kept the Libraries in front of the immense and rapid transformation in how information is disseminated, consumed, and shared.

“Wendy’s critical emphasis on collaboration and innovation has led the University Libraries to new excellence across a large portfolio of services, collections, and partnerships that support University research and teaching,” said Executive Vice President and Provost Karen Hanson. “Through her leadership and work with the Libraries’ outstanding staff, the University Libraries has achieved national prominence as a standout research library — widely recognized for innovative and model programs and technologies, a national leader in multi-institutional initiatives, and a resource for large and diverse communities that span from local to global.”

Hanson noted that Lougee’s leadership was instrumental to the Libraries being awarded the 2017 National Medal for Museum and Library Service from the Institute for Museum and Library Services — becoming only the third academic library to win in the 23-year history of the award program. During Lougee’s tenure, the Libraries also received the 2009 Excellence in Academic Libraries award from the Association of College and Research Libraries.

In an email to Libraries staff, Lougee said she was “immensely proud of all that we have accomplished together,” adding that she looks forward to working with staff over the next several months to continue to “advance the Libraries’ important role on campus, within the state, and nationally.”