43
SHARES
ShareTweetSubscribe
LinkedInPrint
Editor’s Note: The University Libraries’ artist in residence program aims to promote using historical collections as a way to inspire works of art, build connections between artists and archives, and support artists who use historical sources in their work.

Working with archival materials in quiet reading rooms for many hours during my spring residency at the UMN Libraries’ Archives & Special Collections was a contemplative and productive, at times vexing and intense, but overall gratifying experience.

I conducted research primarily in two collections: the Immigration History Research Center Archives (IHRCA) and the Wangensteen Historical Library of Biology and Medicine. My research objectives broadly included the Guatemalan Civil War, migration and trauma, historical conceptions of ‘The Tropics,’ mosquito-borne illnesses, indigenous treatments, and the confluence of race and disease.

A mixed-race Asian-Latinx woman, I lived on a rural farm in Guatemala as a child during the war and like many others, lost family members to its violence. My task was thus emotionally charged as I filed through hundreds of documents in the United States Committee for Refugees and Immigrants Records, which included newspaper clippings, Amnesty International press releases, human rights updates, refugee applications and death reports.

The latter were often dry and gruesomely detailed listings of bodies found, often unidentified, on a daily basis. More sobering was the personalized and specific documentation by aid organizations of ladinos or indigenous Mayans (the group most targeted by violence) who were able to attain refugee status or other legal protection and aid despite challenging political circumstances and bureaucratic systems.

In my search I had hoped to find first-person accounts by those indigenous individuals themselves, but as is the case in the western/post-colonial canon, those voices were most often obscured/mediated by the more privileged, even if well-intentioned, record-creators and keepers.

With the help of Daniel Necas of the IHRCA, I did find in one collection, the Edward Marks Papers, Report from Workshop to Exchange Experiences of Psychosocial and Pyschotherapeutic Work with Displaced Populations in Central America. This lengthly report on a joint Swedish/UNICEF workshop held in Mexico City in 1985 provided numerous case studies and treatment evaluations of trauma survivors.

In early May I gave a lunchtime talk in the libraries and showed clips from my work-in-progress film exploring Mayan myths and contemporary migrant experiences. I plan to use texts from IHRCA documents in the film. 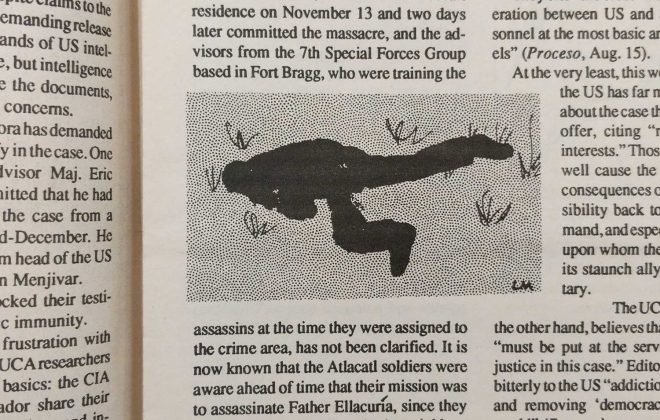 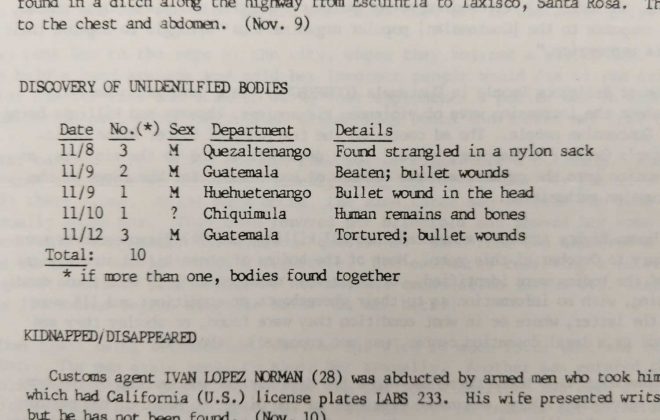 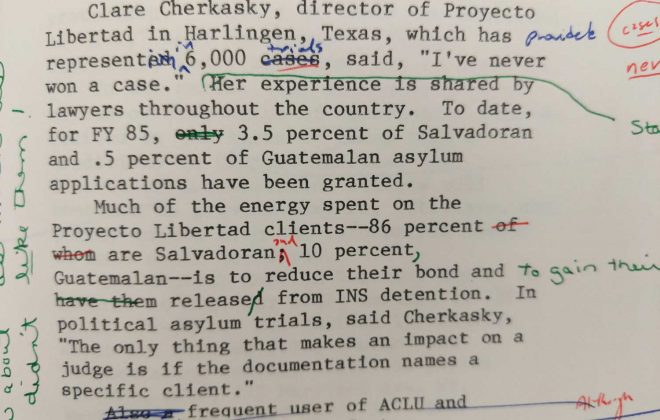 While my research on trauma of displacement and violence in Central America overlapped slightly with my research at the Wangensteen, I more generally have always had an interest in disease and medicine, tropical and mosquito-borne illness, and the rise of unexplained maladies, especially illnesses of exclusion and those that affect women or people of color disproportionately.

Last year I made a film with artist Miljohn Ruperto about the disease Coccidioidomycosis, or Valley Fever, from which by enormous margins, Filipinos and African-Americans suffer or even die. I myself suffer from an auto-immune disease which likely originated from a series of medical anomalies I’ve experienced throughout life. For one, I acquired Encephalitis (a virus that causes swelling of the brain) as a child in Guatemala from a mosquito, which led to an almost fatal coma.

In my research, I found that comatose conditions have been historically little understood and arise from diverse causes. A book from the collection, Epidemic Encephalitis (John Hall, 1924), describes the eponymous condition and includes photos of patients in statue-like or partly comatose positions. To a contemporary eye these photos have the air of being staged and artificial. They made me think about how our evidentiary knowledge and perceptions are so closely linked to contemporaneous technologies. Additionally, the female patients seemed to be posed in much more demeaning positions than their male counterparts. Clearly there is more to this story than bare medical or scientific truth. As a future project, I imagine re-staging these photos in order to examine histories of medical documentation and photographic technologies.

Because the Wangensteen collection spans the years 1430-1930, the books I accessed largely expressed a western colonial perspective on the tropical regions of the world. The colonization of peoples and extraction of resources in those regions inevitably constituted an encounter with endemic illness and infection.

The battle between humans and mosquitoes began with these colonialist projects, less with an objective to keep natives healthy but to mitigate illness amongst white newcomers so that maximum efficiency could be reached in the process of wealth extraction. Today the war against the mosquito continues (many commercial corporations are taking over this effort, for better or worse) importantly in different ways as globalization has created new common interests for global health and security from pandemic outbreaks. However the stigma of the tropical regions is still brought to bear from this colonial legacy. 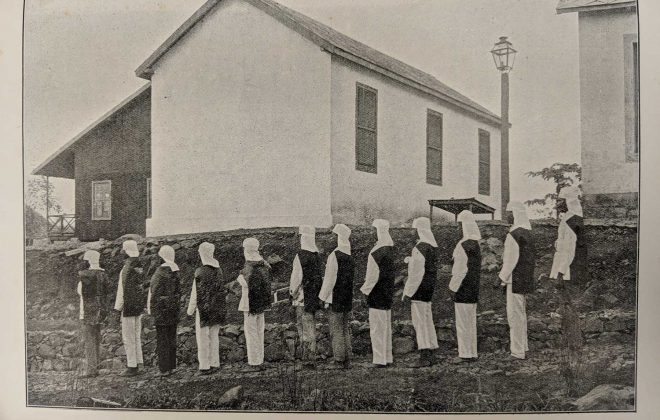 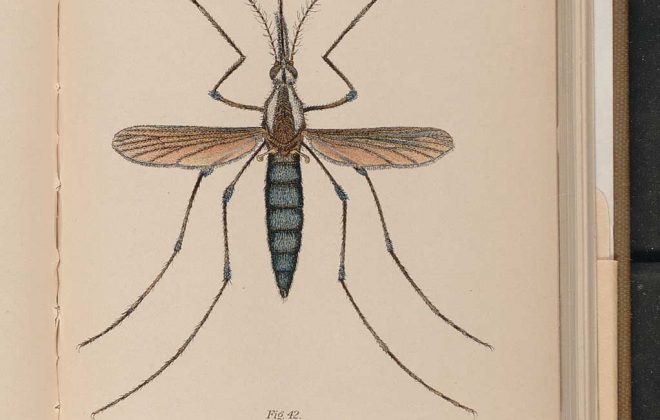 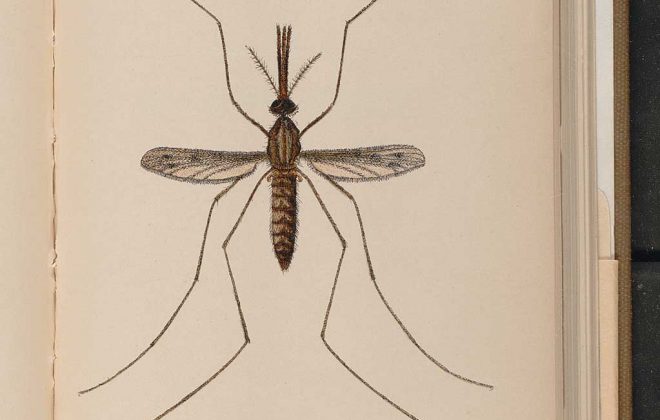 With the help of curator Lois Hendrickson, we located dozens of beautiful color plates of mosquito species illustrations. I may combine these illustrative materials with photographs from the book Sleeping sickness: a record of four years war against it in Principe, Portuguese West Africa (Bruto da Costa,1916). Large groups of native indentured servants in curious mosquito-fighting uniforms appear in photos next to majestic landscapes of drained waterways and proud colonial project managers in all-white vesture. These uniforms, to me, appear strange, ritualistic and ominous. I think of staging a performance for video that re-imagines and amplifies the aesthetics of these costumes and juxtaposes in large-scale the details of the mosquito illustrations. In any case,  I have several ideas for future projects based on my time in those quiet reading rooms at the archives. 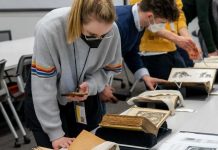