To celebrate the 50th anniversary of the act, the American Archive of Public Broadcasting (AAPB) is encouraging organizations to share archival materials related to the history and preservation of public broadcasting.  University Archives is happy to join them. 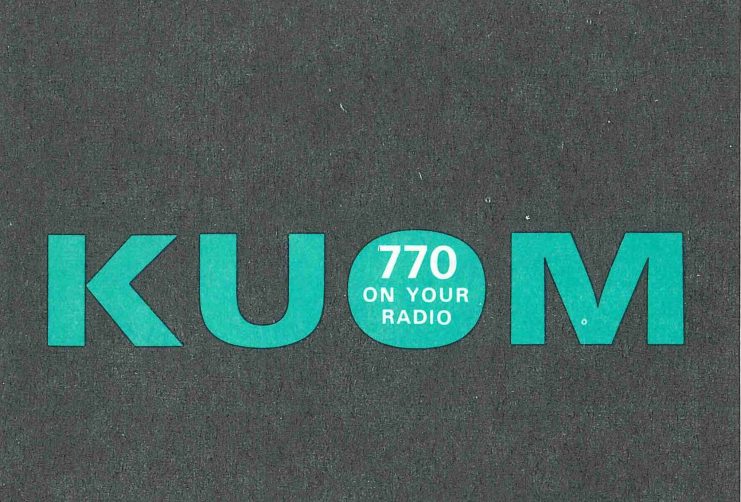 The first Community Service grant documented in our collection was for the 1970-1971 fiscal year. The $7,500 award was used to develop new programs to educate and engage the community.

Funds from the grant paid for the salaries of production staff who collaborated with the Minneapolis Institute of the Arts (MIA) to produce a series of 32 art history broadcasts. The grant report described the project, “It was a highly experimental program for us – attempting to present in aural terms material which is essentially visual in nature.”  The artworks that were the subjects of the broadcasts were displayed at MIA and scripts of the programs were made available in the University and MIA bookstores.

Funding was also used to develop programs focused on diversity. Prior to receiving the CPB grant, program director Marion Watson had reached out to the Native American community to research the possibility of developing a native news program.  With funds from the CPB, Watson was able to hire a producer and Native American students to create 5-minute spots of “Indian News” during the regular afternoon news program.

The station was also able to establish a Spanish language program to serve the Twin Cities Mexican-American community.  Program producers Robert Potter and Abner Arauza helped to develop the program “Ecos en Espanol” (Echoes in Spanish).  A 1971 University press release indicated that the broadcasts featured music and interviews with Chicano organizations and local and national leaders. Marion Watson commented about the program, “Some of our regular listeners may tune out, since it’s going to be completely in Spanish, but approximately the 15,000 Mexican-Americans in the Twin Cities have been ignored too long.”

Read a report compiled about the development of “Ecos en Espanol,” from 1972:

The rest of the funds from the CPB grant were used to purchase tapes to inform the regular news program “Public Affairs,” add to the classical music library, pay for subscriptions to newspapers to research for the program “Editorial Review,” and purchase local advertisements to promote the newly established National Public Radio program “All Things Considered,” which also aired on KUOM.

In the October 5, 1971 cover letter submitted to accompany the “Narrative Account of CPB Grant Expenditures,” KUOM station director Burton Paulu expressed to CPB Radio Projects Manager Don Trapp, “This grant has been very helpful to us, and we are much indebted to the Corporation for Public Broadcasting for making it possible.”

Follow University Archives on Twitter @umnarchives throughout the month of November as we share the history of public broadcasting at the University of Minnesota and celebrate the 50th anniversary of the Public Broadcasting Act through stories and audio recordings.

—Rebecca Toov is the collections archivist for the University of Minnesota Archives.