In 1999, the Immigration History Research Center acquired a collection of materials from the recently closed Refugee Studies Center (RSC), a research center established at the University of Minnesota in 1980. The Center focused its attention primarily on newly arriving refugees from Southeast Asia, following the war in Vietnam.

During the 20 years of its existence, the Refugee Studies Center built a rich resource for the study of issues associated with refugee relief and resettlement. The staff and affiliated faculty members along with students and friends of the Center collected published as well as primary source materials relevant to the subjects.

The archival records of the RSC were processed with major help from a group of graduate students at the University of Minnesota in the first four years following the acquisition of the collection. A detailed finding aid was made available on the IHRC web site.

The RSC library was maintained in the same order in which it was received and a spreadsheet containing basic bibliographic information for the volumes was also accessible on the web site, however, there was not available capacity at the time to properly catalog the books in the central University of Minnesota Libraries catalog.

Over the past year, the entire library of the former Refugee Studies Center was included in a major cataloging project conducted by the IHRC Archives with the catalogers in the Data, Management and Access division of the Library.

As a result, nearly 600 titles are now discoverable in the Libraries’ main online catalog. There are approximately 50 titles that are still awaiting original cataloging before the project will be completed.

The collection contains some rare and early publications such as reports and studies on the resettlement of refugees from Southeast Asia in various locations around the United States, scholarship on the subject 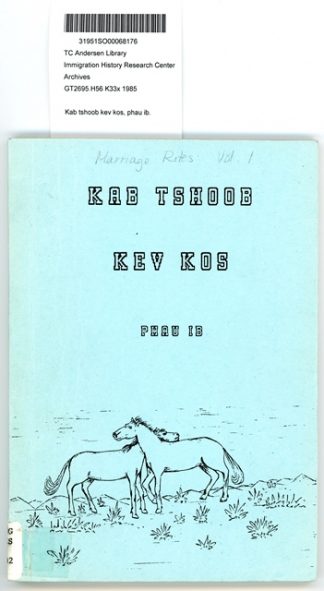 produced during the first decades of the resettlement process, English language manuals for Hmong speakers, early monographs published in France, Thailand, the United Kingdom and other countries, and compilations of Hmong folk tales — to name just a few examples.

All of the bibliographic records contain a reference to the parent collection so the entire library can be reconstructed in the results view after searching for the keyword sequence “Refugee Studies Center Library.”

One of the gems found in this book collection is a volume on Hmong marital customs “Kab tshoob kev kos” published in 1985 as the first volume in an intended series of 20 titles to be released between 1985 and 1989, entitled “Hmong Cultural Patrimony.” According to the front matter, “the books are written by members of the Hmong Community Association in French Guiana, especially Heu Tcha Siong, Ya Tcha Nzeu and Ya Ya Thay.” Yves Bertrais of the Association Communaute Hmong in Javouhey, French Guiana, is listed as the coordinator and publisher, the volume was printed in Bangkok, Thailand, in the Hmong language on 138 pages.

The Refugee Studies Center Collection, including the archival records as well the publications, has been used over the years by a large number of researchers from the University of Minnesota, other universities in the United States, international visitors and non-academic researchers alike. The archival records received a great deal of attention in particular since the widely available finding aid enabled anyone with internet access to get a good sense of what to find in the boxes and folders.

And although the volumes from the RSC library were always available for use in the reading room at the Elmer L. Andersen Library and discoverable via the listing on the IHRC’s and later IHRCA’s website as well, the current project will greatly improve accessibility and facilitate detailed, more refined searching in the treasures of this remarkable resource.