The Bio-Medical Library is hosting Brushed Back To Life: Healing From Illness through Intuitive Painting and Poems by artist Ron Duffy as the next installment in its rotating Art@Bio-Med exhibition series.

In 2010, Duffy had been living with Lyme Disease for over 17 years. He was worn down physically and emotionally, discouraged about what the rest of his life might hold.

Duffy then began painting classes and started writing poetry, something he had never done up to that point. What resulted was the ability to see his illness through a lens of more acceptance and less judgment. The abstract paintings and poems that Duffy created during that time sparked in him a renewed zest for living that had been dulled by illness.

In this exhibit, Duffy shares feelings and experiences that portray the confusion, anger, frustration, and isolation he felt about living with Lyme Disease. Additional paintings and poetry moved him towards hopefulness, joy and making peace with the situation. For Duffy, painting and poem writing continues to be a gentle, healing activity, central to his life.

What: Brushed Back To Life: Healing From Illness through Intuitive Painting and Poems
When: August 2 – October 30, 2016
Where: 2nd Floor, Bio-Medical Library, Diehl Hall

Ron Duffy has had a long and varied career that includes work for the Minnesota House of Representatives and management positions in several industries. Duffy has conducted training on quality improvement and team problem solving strategies. His resume also includes the creation and production of the Inner Journey Radio Program, broadcast on 17 public, university, and commercial stations.

Due to complexities of long-term illness, Duffy retired in 2008. Two years later — at the age of 57 — Duffy began a new adventure as a painter and poet.

Art became significant to Duffy later in life — and as a total surprise. For more than two years, paintings and poems figuratively erupted out of him. Duffy followed his intuitive desire to portray his feelings and experiences about living with Lyme Disease. This creative period led to the birth of his 34 painting and 31 poem exhibit titled “Brushed Back To Life: Healing From Illness through Intuitive Painting and Poems.” 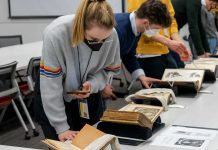 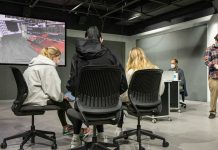