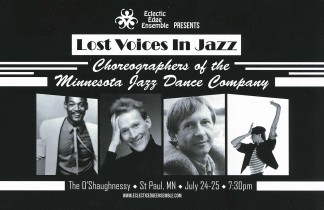 Since 1988, December 1st has been acknowledged around the globe as World AIDS Day, a time to mourn those we have lost to the disease, to support those living with HIV/AIDS, and to raise awareness for this still threatening pandemic. This year, the Performing Arts Archives recognizes World AIDS Day alongside researcher, choreographer, and University of Minnesota Dance Program faculty member Karla Grotting.

Grotting’s Lost Voices in Jazz: The Choreographers of the Minnesota Jazz Dance Company is an ongoing project conceived by Grotting in partnership with the Eclectic Edge Ensemble to reconstruct works by four choreographers lost to AIDS in the late 1980s and early ’90s. As part of her research, Grotting has pored over countless videos, photographs, and performance reviews, and has listened to many oral histories and first-hand accounts by fellow choreographers, dancers, family, and friends. A former Minnesota Jazz Dance Company (MJDC) member herself, Grotting also spent time with the MJDC founder Zoe Sealy’s collection at the Performing Arts Archives, researching and identifying unlabeled videos and photographs.

Grotting’s research culminated in reconstructions of dances by choreographers William Harren, Jeffrey Mildenstein, Clarence Teeters and David Voss performed at The O’Shaugnessy at Saint Catherine’s University in July 2015. We remember William, Jeffrey, Clarence and David with love and respect on World AIDS Day.

Lost Voices in Jazz for World AIDS Day 2015 from Lost Voices on Vimeo.

Partners of the Lost Voices Project

Lost Voices partners with Open Arms Minnesota and The Aliveness Project to support those living with HIV/AIDS and to increase HIV/AIDS awareness. Lost Voices is grateful to University of Minnesota archivists, Kate Hujda and Cecily Marcus for their tireless assistance on the Lost Voices in Jazz project.