Leave it to an archivist to notice an unexplained detail in the current Andersen Library exhibit, Exploring Minnesota’s Natural History, curated by University Archives. At an exhibit event in July a colleague inquired of the co-curators, “Is there a reason why the words in the Henry Nachtrieb letter are spelled in such an interesting way?” 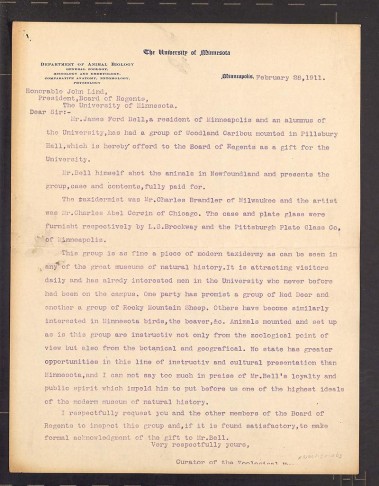 The colleague was referring to a letter that Henry Nachtrieb, State Zoologist and chair of the department of Zoology, wrote to the President of the Board of Regents in 1911 announcing James Ford Bell’s gift of a group of mounted woodland caribou to the University. Nachtrieb informed the Regents that alumnus Bell “offerd” the group and the case was “furnisht” by a local company. Nachtrieb further stated:

“Animals mounted and set up as is this group are instructiv not only from the zoological point of view but also from the botanical and geografical. No state has greater opportunities in this line of instructiv and cultural presentation than Minnesota, and I can not say too much in praise of Mr. Bell’s loyalty and public spirit which impeld him to put before us one of the highest ideals of the modern museum of natural history.”

The letter, which is from the Bell Museum of Natural History records, is displayed within the exhibit to illustrate the growth and development of the Zoological Museum, a branch of the Geological & Natural History Survey of Minnesota and forerunner to the Bell Museum. In hindsight, I realized that this might be the case of a curator becoming too comfortable with the style of speech of his/her subject of research, taking for granted that visitors who noticed Nachtrieb’s nuanced spelling may not be familiar with the simplified spelling movement of the early 20th century. Nachtrieb was an ardent participant.

Simplified Spelling Board created in 1906

The Simplified Spelling Board was incorporated in 1906 by Andrew Carnegie (of steel and libraries), who was the organization’s chief financier. Other prominent members included university professors, newspaper editors, Melvil Dewey (of the decimal system), and Samuel Clemens (of Mark Twain) to name a few. Board members were united in the belief that “English spelling is mard by absurdities and inconsistencies that call for improvement if it is ever to be made a satisfactory instrument for recording the sounds of English speech.” It was the goal of the Board to promote the adoption of “a fonetic alphabet with enuf letters to represent, at least approximately, each separate sound heard in the standard English speech.”

The Handbook of Simplified Spelling, published in 1920, contains a thorough description of the Board’s activities, describes the rules of the language, and includes a dictionary. At the height of its popularity, simplified spelling was adopted at major universities and publishing organizations throughout the country. The University of Minnesota Senate considered a simplified spelling rule for University publications in 1915. However, the movement did have detractors. President Theodore Roosevelt, a faithful simple speller, failed to implement simplified spelling within the proceedings of the federal government.

The Henry Francis Nachtrieb papers (which were digitized in 2014 along with other University Archives natural history collections) are replete with examples of simplified spelling. Nachtrieb kept his correspondence with the Simplified Spelling Board in a separate folder of his administrative papers.

As Nachtrieb would write, if you should feel so impeld, visit Andersen Library to read some intentional typos and explore the story behind the Geological and Natural History Survey of Minnesota (don’t forget the photographs of cute birds, bear cubs, beavers, and baby moose on the 2nd & 3rd floors). Exploring Minnesota’s Natural History is open through September 23.