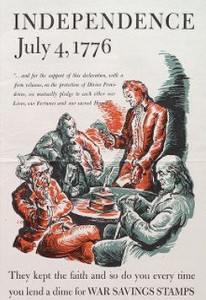 The fourth of July commemorates the adoption of the Declaration of Independence on July 4, 1776. During war, this, and other patriotic holidays took on added significance. Specifically these important dates were used for all sorts of purposes including recruiting, swaying public opinion, promoting conservation, and selling products.

Our War Posters Collection is a collaborative project between Archives and Special Collections at the University of Minnesota Libraries and the Hennepin County Library from its Kittleson World War II Collection (located in Special Collections at Minneapolis Central Library). The collection contains posters from government, commercial, and charitable organizations. These artifacts are rich with meaning and artistry.

They are now used in courses from history to graphic design, from public health to rhetoric, from marketing to theater. Faculty and instructors can often include these images in a course site or as part of a course assignment. These collections are multinational in scope and cover: 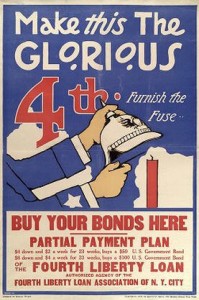