By Lisa Vecoli
Curator of the Tretter Collection in Gay, Lesbian, Bisexual and Transgender Studies

Every month the curators provide a report of our activity so that our colleagues and library administration can see what we have going on. When I did my report this month, one of my bullet points was:

“Had a researcher looking into the founding of the MN AIDs Project. The collection was in the final stage of being processed. I was able to tell him we would send him the finding aid the next week. And in the meantime I could provide him with contents in several other collections that were relevant. I felt like a real curator of a functional archive – it was exhilarating!”

To understand why this was notable, we have to go back three years to when I began working in the Tretter Collection for GLBT Studies.  I took over for the founder, Jean-Nickolaus Tretter. Jean built the collection in his home over the decades and then donated the collection to the University of Minnesota Libraries in 2000. He added things a little at a time and kept all the details of what was where in his head. (Jean loves collecting. He does not love computers.) 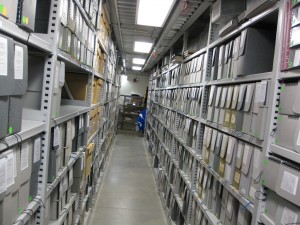 When I started I was confronted with 2,700 linear feet of material, perhaps a quarter of which was in some kind of order by name. Even the organized portion presented challenges. For example, the first student group at the University of Minnesota (founded in 1969) was named F.R.E.E. Because the student organization changed names numerous times over the years, Jean put the materials on F.R.E.E.  in with those of the current student group, Q.S.C.C. This makes perfect sense once you know. But without asking Jean, it might have taken a long time before I found them.

My calls to Jean were regular. “Where are the Advocate Magazines?” “Do we have anything on x?” “Where should I look for material on y?”  Jean was endlessly patient. And he could often get me started on locating material in the portion that was organized. (He knew F.R.E.E. was under “Q!”) But that was no way to run an archive. Jean’s retirement meant I had to find out what we had, make it visible online and provide the information researchers need to evaluate whether to visit.

Step one was a list of the boxes. That sounds simple, but with thousands of boxes in three locations, it was a challenge. Once it was done, however, being able to send researchers a spreadsheet of topics and boxes made the collection more useable. I also relied on this location list and continue to use it constantly. The location list was a great start but did not give any context to the titles. So the second step was to create summary level finding aids. In 2012 we had 22 finding aids on the Tretter webpage. Eighteen months later we had over 100. The new finding aids listed collection names, sizes and a short context but nothing on the contents of the boxes.  It was a step forward, but not good enough.

The big transformation has come with the Legacy Grant* the Tretter Collection received in 2013. The award provided us with $121,000 to hire staff with the goal of processing 1,600 linear feet of collections in 14 months. I was giving a tour last month to a group that included an experienced archivist. When I announced our numbers, she literally gasped out loud. Those who know will tell you this was an extraordinarily ambitious goal, especially given the complexity of our holdings.

During a recent visit to several archives in California, they were very proud of their processing. One informed me that it cost an average of $500 a box/linear foot. Another estimated that it cost $400 a box. Some quick math shows that our project is getting the work done for about $75 a box! 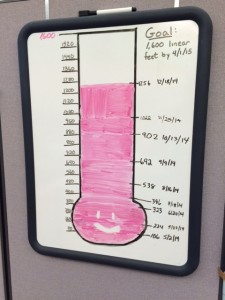 In the past 10 months, we have processed over 1,250 linear feet of material. MN AIDs Project – Done! Outfront, MN – Done! MN Men of Color – Done! Calliope – Done! Lesbian Resource Center – Done! Two-Spirit, Patrick Scully, Robert Jansen, Jim Chalgren, Bi Women, Twin Cities Pride, Scott Dibble – Done, Done and Done! We have processed dozens of collections, with each having a finding aid online that specifies not only the size of the collection but what is in each box.

Among the boxes were thousands of periodicals. These have been cataloged and added to MNCAT, the online catalog for the University of Minnesota Libraries. This makes them findable by researches all over the world. In all, we have added over 16,000 issues of almost 200 different titles, from over a thousand issues of “Bay Area Reporter” to a few missing issues of “The Transvestian.”

Three years ago if a researcher has asked what we had on the MN AIDS Project, I would not have been able to tell him much beyond the number of boxes we had. But last month, I could provide helpful information and it was exhilarating. I could promise him a complete finding aid. I could tell him how to locate issues of “New York Native.” And I could do a word search and identify several other collections he might want to look at. As a result, he is in the reading room right now and has made several return visits to use the collection. He is interested, engaged, appreciative and motivated to document the founding of the MN AIDS Project. And the collection is fulfilling its purpose to be a resource for scholars.

Jean-Nickolaus Tretter gave us a tremendous legacy by collecting this material when there was no reason to believe anyone would ever want it. His work of calling attention to GLBT history and culture will be a gift for generations to come. And now that researchers do want to use it, we are creating an effective archive that meets their needs.

All of this has been the result of outstanding efforts by library and grant funded staff.  Li Zhu from the library has been a cataloging magician. Amanda Wick and Jennie Shaw were hired on the grant from the start and have moved mountains – literally. We have had great temporary staff including Teresa Tjepkes, Andrea Hoff, Tyler Gardner and Jordan Burrell. And we are welcoming Kimberly Arleth and Emily Atchison  – because we have three months to go and 350 linear feet that still need processing!

*The project has been financed in part with funds provided by the State of Minnesota from the Arts and Cultural Heritage Fund through the Minnesota Historical Society. 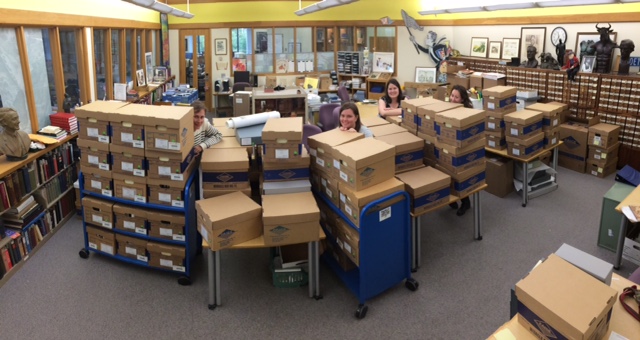