The application of technology to learning — eLearning in today’s parlance — is not new at the University.

The school first began using films in classrooms in 1915. Thirty years later, the University’s radio station began airing classes over the air. The first online courses were launched in the mid-90s.

But in recent years, the pace has picked up — considerably. With a host of new initiatives the University is venturing with increasing speed into the rapidly expanding world of eLearning.

All this flux is affecting the University Libraries, opening up new and exciting opportunities — and challenges — as the Libraries emerge as far more than a source of potential course material. Increasingly, the Libraries and its staff are being seen as a vital resource not just for content expertise but also leadership in meeting the challenges posed by the transition to new modes of teaching and learning.

“The work is rewarding because it’s moving so fast,” says Kristi Jensen, the Libraries’ Program Development Lead for the eLearning Support Initiative. Along with other librarians, Shane Nackerud, the Technology Lead for eLearning Support Initiative, and Web expert, John Barneson, Jensen is participating in cross-disciplinary and departmental teams that are studying and making recommendations on a number of eLearning issues.

“We are on the cutting edge of using learning technologies and developing relationships with other people on campus who are working on eLearning too,” she says. “We are making things happen in a short time frame.”

A good example of the eLearning collaboration between the University Libraries and academic units is the Digital Coursepack (DCP) initiative launched fall 2012 by the College of Education and Human Development (CEHD). The DCP evolved from previous technological innovations that set the groundwork for the new project. The most important of these was the CEHD’s iPad initiative; beginning in 2010, all incoming College of Education freshmen receive an iPad for use in their courses.

“Here we had all new students using a new tool that is lightweight, super portable, easily connected to a computer, and already being incorporated into curriculum by our instructors,” says Treden Wagoner, the academic technologist for CEHD. On the lookout for, among other objectives, ways to save students money, Wagoner and his colleagues hit upon the idea of providing required course content entirely through using digital course material that could combine PDFs scanned by him and his team as well as links to materials available through the Libraries eReserve system. Through this system, Libraries staff make available electronic reading materials for students in specfic courses based on faculty requests.

The Digital Coursepack pilot was launched last fall in several sections of the Post Secondary Teaching and Learning course that all CEHD freshman — now equipped with iPads — are required to take.

“CEHD came to us knowing we already had a lot of content that we own. They wanted to avoid making students pay for that content over and over again,” explains Nackerud. Working with faculty teaching the PSTL course, members of the Libraries’ access and eLearning departments reviewed assigned readings to see if the Libraries already owned access to the texts. They also offered advice to faculty members concerning issues of fair use and copyright, topics in which Nancy Sims, a University librarian as well as an attorney, provided guidance. She also helped in other areas where the Libraries have expertise, like content procurement and display. 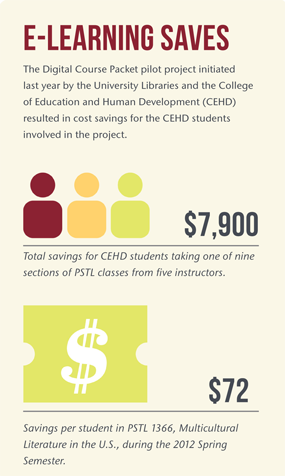 In terms of one objective — saving students money — the Digital Coursepack initiative was pretty much an unqualified success. Wagoner estimates that the fall project saved 184 students a combined $7,600 in printing, photocopying expenses, and royalty payments.

For spring semester, the total savings for students taking one of nine sections of PSTL classes from the five instructors who are participating in the DCP initiative is $7,900.

Molly Rojas Collins, who taught PTSL 1366: Multicultural Literature in the U.S. during spring semester, estimates that her DCP saved each student about $72. Though the savings are important, she says other benefits were more significant.

“Students coming to class with iPads have immediate and constant access to all the texts,” she points out. “Nobody forgets or can lose the books or the readings — even if they don’t have their iPad with them, they can access the material on any computer with an Internet connection.”

In turn, knowing that students have the technology to instantly access course materials gives Collins new pedagogical latitude. “I can have them research things on their iPad to contextualize a story right on the spot,” she says. “For example, I can be teaching a session on immigration and have them follow the travels of figures in literature using Google Maps.”

In compiling her materials, Collins relied on the Libraries’ experts and expertise.

“When Treden [Wagoner] mentioned the eReserve system, I knew this was the solution,” she says, “I provided the people there with my stories, they put them on eReserve, helped me figure out the copyright and licensing issues, and created a nice looking-site that is very well organized.” Not one student, she reports, has complained about the coursepack being too complicated.

Gary Peter, another CEHD faculty teaching PSTL 1246 this spring, had a similar experience creating his coursepack. “For me, the Libraries staff are the point people” he says. “For an instructor, this is a real advantage because you have people who are experienced with copyright and fair use and can help make sure that everything is done correctly.”

Sarah Klyman, a freshman in CEHD took PSTL 1525 last fall from faculty member Margaret Kelly. Klyman says it was a struggle at first to get used to reading text on a screen rather than in print and she never did get used to the note taking app on her iPad. Still, the overall experience was a positive one for the Chicago native who is pursuing her self-created major (“I’m calling it Urban and Community Education,” she says).

“I would definitely go digital in the future,” she says, giving digital coursepacks high grades on the basis of cost and something else equally important to her.

“It’s a lot easier on the environment to go digital,” she observes.

Meanwhile, the Digital Coursepack initiative served as a natural stepping stone for library staff into the University’s latest and most ambitious eLearning initiative: MOOCs.

MOOCs — for massive open online courses — are classes that can feature all the components of digital and distance learning, including texts, graphs, films, animation, hypertext links and more. Their primary characteristic is conveyed by the name: these are open — meaning free — online courses intended for mass audiences of learners, some of whom may be enrolled at the college or university where a course is generated, while others might be working to meet a certification requirement in their occupation, and still others simply taking the course to further their own knowledge.

Last February, the University announced that it was gearing up to launch its own MOOC offerings, partnering with Coursera, a MOOC platform co-founded by two computer scientists at Stanford. Five faculty members were chosen and are supported by a team that includes Libraries staff members Nackerud and Jensen. They, along with other library staff and campus professionals are helping the five faculty developing MOOCs to source and create content suitably formatted to a digital environment. Others, like Nancy Sims, the Libraries’ copyright and fair use expert, are helping the teachers — who have ultimate say in the matter — find their way through issues of text ownership and fair use — made even trickier by the MOOCs initiative.

“Initially our role [in the development of pilot MOOCs] is focused mostly on content, but also on how to do things differently. How to scale content in a way that isn’t so labor intensive for teachers that no one will want to do it,” she says. Beyond that, she observes, “We have to understand best practices and figure out how content needs to be formatted and transformed.”

For Jensen, and her Libraries colleagues, the ultimate goal is for the University Libraries and its campus partners to become a “one-stop shop” for faculty whether they want to develop digital coursepacks, MOOCs, or exploit other kinds of eLearning technology. Each breakthrough, she says, informs and advances the next.

“This is all in the formative stage,” Jensen says. “It has the real potential to change the way we do things in research libraries. But it’s too early to tell how everything will play out. Our hope is to get in on the ground floor while faculty are just beginning to think about the potential for eLearning and become a critical part of providing content, tools, and expertise as courses and curriculum are being formed.”

Visit the University of Minnesota’s Coursera MOOCs page at coursera.org/minnesota.