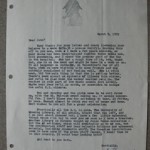 During the last six months, I had the privilege of working with Tim Johnson, Curator of the Sherlock Holmes Collections, transcribing letters written to John Bennett Shaw, a major donor to the archive.  These letters began as business transactions between two people sharing the same passion of trading, purchasing or selling Sherlockiana.  Their interests include all sorts of ephemera, for example, menus or programs from various Scion Societies around the country (and world), as well as early editions of manuscripts, and Collier’s magazine stories (where Sherlock Holmes stories were first introduced to American readers). They collected signed photographs of actors of Sherlock Holmes stories such as Basil Rathbone, Nigel Bruce and Orson Welles.

As I was transcribing the letters I began to appreciate the development of deep friendship between John Bennett Shaw and the collectors he regularly corresponded with throughout the years.   Over time, many of these letters became more personal: a son going off to Viet Nam, descriptions of holidays enjoyed, their personal illnesses as well as the illnesses and deaths of their spouses, and re-marriages. 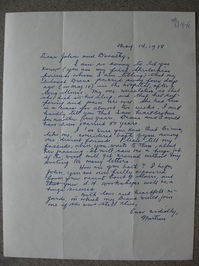 Even though I am not privy to the letters of Shaw written to these many correspondents, I feel that I have gotten to know Shaw through their pens.  He seemed to be very generous, intelligent and an excellent businessman. He drove a hard bargain for items he was selling and was a savvy negotiator for items he wished to purchase. He was kind and thoughtful in his comments as his writers comment back to him.  They were amazed at his travel schedule as he gave workshops and lectures all over the world and were in awe of his energy in accomplishing so much  –yet he responded to his correspondents in a very timely basis.

One of my favorite discoveries was a comment from one of the many letters from the Librarian of Marylebone Library in London, an avid Sherlockian who was instrumental in building a Sherlock Holmes collection at this library. She wrote to Shaw that she had provided consultation to the production staff of the Sherlock Holmes TV series in the 1980s with Jeremy Brett.  As a “thank you,” they invited her to watch two days of filming of “The Hound of the Baskervilles” which she enjoyed immensely, even in the rain.  Later, they told her that they had to film the Hound scene over again because as they were editing the film, they realized that the Mastiff was too friendly and was always wagging his tail!  (I don’t think the Librarian went back for the re-filming!) There are countless stories like this one in many of the letters to Shaw, which made them delightful to read.

I appreciate the collection even more now after learning in a “behind the scenes” way about all the elements included in building a great collection.  I believe it wouldn’t be as significant as it is without the relationship/friendship development that is such an integral part of this process.

Come read them yourself!!  You’ll also see the beauty and lost art of letter writing!

(On temporary assignment to the Sherlock Holmes Collections.)