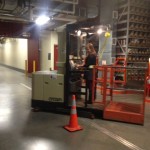 In the words of my colleague Lisa Vecoli, you know the lesson is off to a scary start when there is mention of the dead man’s switch. There are reasons I chose to be an archivist and not a police officer, and discussion of a dead man’s anything is very much one of those reasons.

Thus began two afternoons of training in order to drive one of the stock pickers that roam the caverns of Elmer L. Andersen Library. Underneath the Andersen Library, carved 82 feet down into the bluffs of the Mississippi River, are two caverns where the Department of Archives and Special Collections as well as the Minnesota Library Access Center store their treasures of books and archives. Each of the two caverns measures 680 feet long, 65 feet wide, and 23 feet high. It is because of that 23 feet of height that Lisa and I were attending training–because even with a ladder those highest shelves remain unreachable without the aid of a stock picker.

The two stock pickers in the caverns (aptly nicknamed Isis and Osiris after the ancient Egyptian mythological gods of the underworld) operate as fork lifts with a table attached to the forks, allowing for archives boxes to be placed upon retrieval. The dead man’s switch, as we learned from our instructor Tim McCluske who works with MINITEX, is a foot pedal that acts as a fail-safe, bringing the machine to an abrupt stop should an emergency arise. The stock picker weighs nearly three times more than a car and proved to be powerful and intimidating. Having just moved to Minnesota from New York City, I have spent the past five years not driving a car let alone heavy machinery, and now here I was standing in the carriage of a massive machine attempting to learn the sharp pivot point so as not to run into shelving or walls.

And yet somehow I got the hang of it. My training involved figure 8 turns around orange cones that resulted in mild flashbacks of driver’s training as a teenager, as well as driving laps in and out of the stacks, over and over again until entering the narrow aisles was no longer a hard jolting movement. We also road the carriage to its very tallest height, practicing what it would be like to take a box off the highest shelf some 20 feet off the ground. Terms such as plugging and counterbalance now make sense. I even came to enjoy driving through the stacks, the reflection of the colorful books on the shelves whizzing by on the windshield.

I am thrilled that I am now trained on our stock pickers because it allows me to access my materials to assist researchers in the Upper Midwest Jewish Archives. But it also allows me to add another line to my resume; if my career as an archivist should fail, I know that with these skills I could have a backup career at Home Depot.