Professor Carol Tilley, whose extensive research into the history of comic book censorship included sources from Archives and Special Collections at the University of Minnesota, has discovered that a key figure behind the move to censor comics falsified his data about the impact of comics on youth. 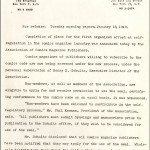 Professor Tilley is an Assistant Professor in The Graduate School of Library andInformation Science at the University of Illinois at Urbana-Champaign. Using Frederic Wertham’s papers in the Library of Congress, Professor Tilley discovered inconsistences and misinformation in Wertham’s cases studies and notes for his infamous book about the “evils” of comics, Seduction of the Innocent. (For more on her research, click here.)

Prior to her visit to the Library of Congress, Professor Tilley visited the University of Minnesota to use the records of the Child Study Association of America.  The records contain files documenting how the Association was caught up in Wertham’s comics “witch hunt” and the U.S. Senate Subcommittee on Juvenile Delinquency Hearings in 1954. The Comics Code Authority, rules for industry self-censorship, was formed within months of the hearings. 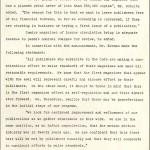 Finding information on comics in the Social Welfare History Archives is a wonderful example of discovering the unexpected in Archives and Special Collections.  Many collections reflect the diverse activities and interests of the people and organizations that created them and often contain a new discovery or surprise for those who really “dig” beneath the surface. Researchers often make creative use of these sources to study topics and issues far different from the original purpose for which they were created. 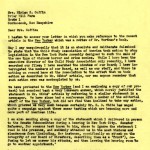 The Child Study Association’s Children’s Book Committee and its Comics Subcommittee were formed to help define and promote “good books” for children.  The comics subcommittee files date from 1941 to 1960 and cover an important period in the legal history of comics in the U.S. They reveal work by staff member, Josette Frank, and others to gain cooperation from comic book publishers to promote what were considered positive comic themes and production standards.  The files also document early trends towards self-censorship in the guise of “self-regulation” and efforts to “raise standards” in the comic book industry. (See Association of Comic Magazine Publishers letter) 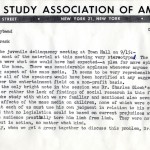 Though dated by current standards, the Association’s attitude towards comics was surprisingly supportive for the time and recognized benefits from reading comics and the legitimate need of children for exciting characters and stories.  Frank’s work backfired on the Association once the panic over comics became more heated in the 1950s. The files reveal a sense of the Association getting caught up in hearings and controversy while trying to maintain a professional approach to the subject of comic books and defend its past actions, but ultimately swinging towards a more rigid position regarding “bad comics.” (See excerpt of letter from CSAA executive director, Gunnar Dybwad, and the memo from Josette Frank.)