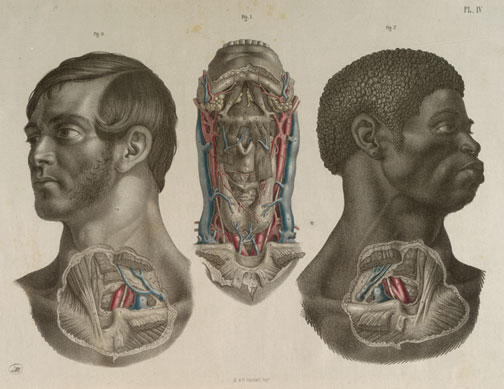 In the first-year medical students’ gross anatomy class, a talk on the history of dissection has just ended. Now the students are out of their seats and milling around the front of their lecture hall, poring over a display of anatomy atlases that are hundreds of years old.

“It’s fun,” says curator Elaine Challacombe of the lecture, which she helps prepare every year. “The students might never find us up here otherwise . . . they get fascinated, and then they come up and use the library.”

“Up here” is the fifth floor of Diehl Hall, and “us” is the Owen H. Wangensteen Historical Library of Biology and Medicine, a broad-based collection of nearly 70,000 rare books and journals, manuscripts, and artifacts spanning six centuries, including hundreds of anatomy atlases.

What’s so fascinating about them? “These were made before there was an understanding of the body as cellular, and the drawings are done more as works of art,” Challacombe said, holding out the atlases. In one, drawn by Pietro de Cortona in the eighteenth century, a woman is holding her insides open to show her uterus. The wall next to her has also opened; it, too, has a uterus inside. Another atlas by D’Agoty, a pioneer in the process of color printing, has backgrounds done in a brilliant green. In another, a meticulously drawn fly sits on the linens draping a woman. One 1702 atlas by Remlin is in the form of a pop-up book.

“This artist gave his cadavers beautiful faces, nearly heroic, like something out of literature,” Challacombe said, holding up an atlas by Joseph Maclise. “Cadavers came from destitute and homeless populations. They almost certainly didn’t look like this.”

Both Challacombe and Jennifer Gunn, associate professor in the history of medicine program, emphasize that knowing one’s history doesn’t mean dismissing what’s come before as ignorant. “People often expect the history of medicine to be the march of progress, a display of great discoveries in which everything before germ theory is ignorant,” Gunn said. “But the history of medicine is really about health and the condition of health; it’s about the belief systems and organizations we’ve created.” “Certain issues never go away. So often only the diagnostic tools are new,” Challacombe added. “It’s always best for medical students to know what came before, and how to search the literature for it.”

Visiting the Wangensteen Historical Library of Biology and Medicine Although items in the Wangensteen Library do not circulate, members of the public may view the collections onsite. The library is open Monday through Friday, 8:00 a.m. to 4:30 p.m., and researchers are strongly encouraged to make an appointment.

Doctor Owen H. Wangensteen, for whom the Historical Library of Biology and Medicine is named, felt similarly. He was fascinated by the emphasis on history at the European centers where he studied, Challacombe said, and considered learning one’s history an important part of education. “He believed that people could get good ideas from studying medical history—that looking at the way people handled problems in the past could give a novel perspective and bump you out of the box, help you think more creatively,” Gunn said.

Wangensteen understood the power of bumping one’s self out of the box. He grew up on a farm in Lake Park, Minnesota, and went on to change the way surgeons were trained and educated in the United States. When Wangensteen began his own studies, people considered surgeons mere mechanics. But by the time of his death in 1981, surgeons could be esteemed researchers who published their findings. They were pioneers, like Wangensteen’s former students Christiaan Barnard of South Africa and Norman Shumway of Stanford, CA, who performed the world’s first heart transplants, or other former students who became professors of surgery at more than thirty institutions worldwide.

“Wangensteen was a driver,” Challacombe said, “one of those people who was constantly thinking.” His New York Times obituary describes him as someone who often rose at 3:30 a.m. to read for a few hours before he went to work. His best-known innovation is a suction technique he developed in the 1930s, to combat the intestinal obstructions that often killed patients after surgery. Wangensteen suction is believed to have saved tens of thousands of lives, especially during the Second World War, and is still used today. But years later, when Challacombe asked the late Wangensteen’s wife to help her hunt down the patent, Challacombe discovered that the doctor had never filed one. He felt it would be immoral to restrict access to a technique that could help so many, Challacombe said.

From Medical Students to Romance Novelists

So perhaps Dr. Wangensteen would appreciate what goes on these days at the library named after him. (Unlike many collections named after someone, this library did not begin as Wangensteen’s private collection, nor did he select its books, though he was a force behind its creation and support in the 1960s.) The library serves a broad humanities base, and people from all over the world find their way there online, if not to Diehl Hall. Women’s studies faculty use works in psychiatry and look at artifacts like speculums. Art history majors study prints by Dürer. Landscapers, homeopaths, and pharmaceutical researchers explore various botanical collections, including books on the medicinal qualities of mushrooms. “These books have a tendency to disappear in libraries, for reasons you might expect.” Challacombe said, “We don’t let people take them out.”

Regents Professor of Comparative Literature Richard Leppert used the library’s anatomy atlases to help write Art and the Committed Eye. Authors research historical novels here, using sources like the one-of-a-kind letters written by seven generations of French surgeons, the Pamard family, or the letters of nineteenth-century medical student James Stuart. Prolific local children’s writer and editor Sylvia Johnson used drawings from the library’s herbals to illustrate Tomatoes, Potatoes, Corn and Beans: How the Foods of the Americas Changed Eating Around the World. “Once, an author who often did research here gave me a box of her books,” Challacombe said. “They all turned out to be romance novels.”Sometimes lawyers conduct research for lawsuits, though confidentiality issues keep them from telling Challacombe much about what they’re looking for—tricky when she’s the one who must retrieve materials from the stacks. “On one case, it took me two weeks to figure out what they wanted,” she said.

Because Challacombe works one-on-one with everyone from undergraduates to external researchers, Gunn said that she thinks of Challacombe as a teacher, too. “Teaching is more fun when you work with librarians who not only help, but teach,” she said. Challacombe especially aids Gunn’s undergraduates in narrowing topics, finding materials, and synthesizing sources. “Elaine can pull out artifacts like surgical tools and things from the dental collection . . .  the students are totally into it,” Gunn said. Gunn hopes that her undergraduates who don’t plan to become health professionals or historians will learn critical thinking skills if they put their hands on what librarians call “authentic information” about the past. “I want them to look at one of those atlases and think, ‘When dissection wasn’t common, how did they get these drawings? How did they put together this information?'” she said. “It’s hard to dismiss the past as ‘ignorant’ when you consider how information was packaged, disseminated, and used.”

Consider, for example, one of the library’s receipt books. Receipt books were usually kept by wealthy women of the house, in the days when nearly all health care was done at home, and contained instructions on how to cure ailments. This receipt book, kept by Englishwoman Mary Pewe from 1636 to the mid-1680s, is valuable in part because Pewe cites all her sources. It’s also “beautifully written ” said Challacombe, opening the yellowed book to display over seven hundred tidy handwritten pages. What does Pewe know about caring for her family? Her entry on curing sexually transmitted disease begins, “Take a dead man’s bones and burn them . . .” Another suggests cleaning the teeth with broom and ash. It doesn’t sound appealing, but might be at least partly effective. “Ash is a basic ingredient in soap,” Challacombe said. 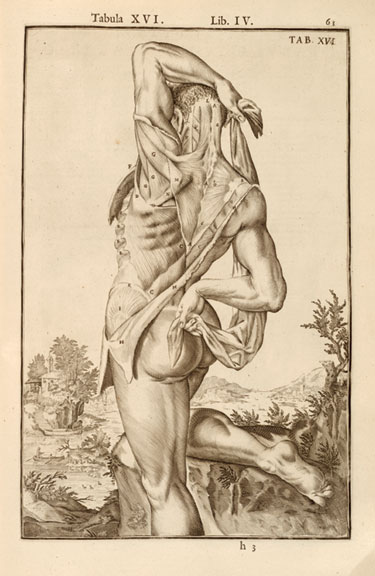 The Wangensteen Library shows us that there’s nothing inevitable about what we know. Westerners used the humoral theory of medicine for over two thousand years; the nineteenth-century germ theory is just the latest in a series of ideas that has moved people toward a new understanding of the body. “Biomedicine is our model, but it has only been so for the last 150 years,” said Gunn. “Our attraction to alternative medicines shows that we know biomedicine isn’t all there is.” Gunn also noted that the debate over the federal government’s role in health care—about doctors, fee for service, and economic competition—isn’t new. An act passed in the 1920s by a crop of newly eligible women voters, the Shepherd Townsend Act, was aimed at improving the health of the country’s babies after medical examiners for the First World War draft learned that many young men weren’t healthy enough to fight. The American Medical Association fought the act the entire seven years it was in place; doctors worried about being able to compete economically with the government. Certain issues never go away, Challacombe said. The past is not a steady march of progress, Gunn said. Perhaps William Faulkner might add, “The past is never dead. It’s not even past.”

Researcher at the ready