The Secret Life of Libraries 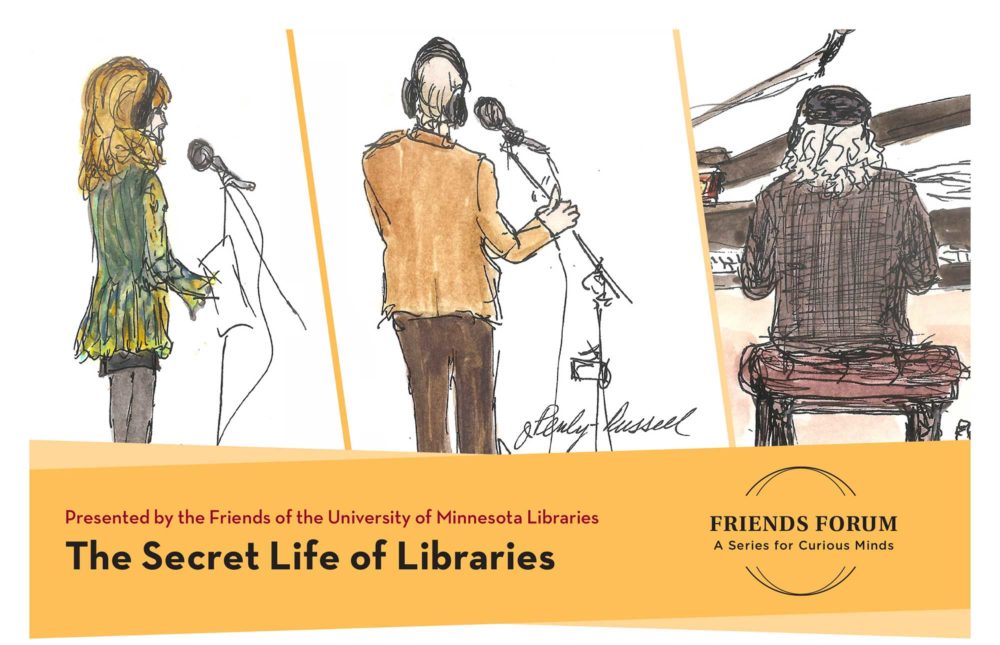 Libraries are full of intrigue and mayhem (and not just on the shelves!) One thing is for sure, “Alternative Facts” are in the fiction section!

Sue Scott is a veteran stage and commercial voice over-actor, who for 24 years was the female cast member on the public radio show A Prairie Home Companion. During those years performing “live” on the radio, Scott played everything from well-intentioned moms and ditzy teenagers to Guy Noir femme fatales and leathery saloon keepers. She has recently climbed back on stage in a variety of theater roles in the Twin Cities including Barbecue at Mixed Blood Theater, Little Wars with Prime Productions and the sold-out run of Sisters of Peace at the History Theatre.

Scott has also been cast in some interesting roles in film and television, namely ABC’s In An Instant and the Netflix series Lady Dynamite. Currently, Scott is completely immersed in producing her new podcast Island of Discarded Women.

Tim Russell worked on-air for WCCO Radio in the Twin Cities for some 33 years. In 1994 he became an actor on Garrison Keillor’s A Prairie Home Companion, and its successor, Live From Here, until the fall of 2018.

Russell is a man of many voices, which continues to serve him well, as a proud SAG-AFTRA Union Voiceover Artist. Russell acted in the Robert Altman film, A Prairie Home Companion in 2006, in the Coen Brothers’ A Serious Man in 2009. In 2016, he appeared opposite Christopher Lloyd in I Am Not a Serial Killer.

Russell is also a film critic on his blog, Russellreviews.com. A collection of his work on A Prairie Home Companion now available from Highbridge Audio.

Richard Dworsky served as the pianist/music director for Garrison Keillor’s A Prairie Home Companion from 1993 to 2016, and then continued for two more years with Chris Thile’s Live From Here. He has accompanied show guests including Paul Simon, James Taylor, Bonnie Raitt, Sheryl Crow, Brad Paisley, Yo-Yo Ma, Emmylou Harris, and many others.

Dworsky has released many albums of his original compositions including his latest CD, All In Due Time, and his music can be heard in documentaries on HBO and PBS. In the 2006 Robert Altman film, A Prairie Home Companion, Dworsky appeared on camera accompanying actresses Meryl Streep, Lily Tomlin, and Lindsay Lohan, and he served as the film’s arranger and composer. He has composed works for musical theater, including The Marvelous Land of Oz ( MCA /Universal/Showtime); and Broadway legend, Kristin Chenoweth recorded Richard’s song called Goin’ to the Dance With You.

What is a Makerspace?

Intro to the 3D printing