Describing the moving borders over the decades and centuries and eons of the country we now call Ukraine, Brian Vetruba holds an imaginary ship in his outspread hands, and rocks it east to west. What is now Lviv was once in Poland; Kherson has Greece in its heritage, he says; and Kyiv, founded in 842, was seized by a Viking in 882. The city was made the capital of a new satrapy, with Oleg as its prince.

To understand the current conflict in Ukraine, you don’t have to know all the details about Ukraine’s history — but it doesn’t hurt and might help.

That is why Vetruba, European Studies Librarian, turned to his University of Minnesota colleagues serving on the From Our Collections committee to curate a new book display in Wilson Library’s basement: “Ukraine, Its Culture, History, and Literature.”

Now on view through the first week of December, the display already has attracted curious book borrowers and some selfie takers.

In addition to the books, the U of M Libraries has: 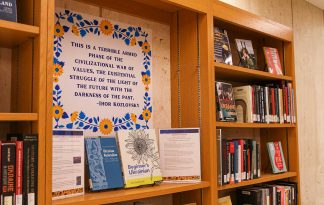 One can learn a little, rather quickly, on Twitter about the Russian invasion of Ukraine. The Russian bombs that exploded in Kyiv starting early on Feb. 24, 2022, woke Ukraine President Volodymyr Zelenskyy.

You can see actor Sean Penn give Zelenskyy his Oscar, to hold until Ukraine wins. There is a video of Ukraine’s president entering the port city of Kherson only a short time after Russian troops had retreated. And you can hear the leaders of Russian invaders assert that Kherson still belongs to Russia or bluster about the “infinity of the Russian world.”

Stumble about the Twitterverse and one still may feel uninformed. How many missiles can Ukraine take? And where does this idea about Ukraine being part of Russia come from? If we accept that assertion, where does that leave the Baltic States? Is Putin rebuilding the U.S.S.R.? What does it all mean?

Vetruba, who also is Librarian for German, Nordic, Slavic, and Dutch; Jewish Studies; Linguistics; and French and Italian (interim), wants you to know more and dig deeper.

You can check out novels or short stories (trigger warning — many are sad, sardonic, or simmering with anger). You can read a very recent e-book about Zelenskyy’s transition from playing a history teacher turned president on TV to winning the election as Ukraine’s sixth president. Spoiler alert: His presidential agenda was embedded in the show.

This modern war of missiles, mines, and migrating civilians on the run was started by just the latest tyrant set to rule their country. Besides Vladimir Putin, current head of the Russian Federation, the Nazis occupied Ukraine starting in 1941 and killed 34,000 Jewish people during just two days of massacre. That period of history is difficult to parse, to say the least.

Did you know that Stalin started a famine to starve the peasants growing wheat in Europe’s breadbasket? They didn’t appreciate collective farms and so Stalin decided to get rid of those pesky contrarians.

All this to say that: The history of Ukraine? it’s complicated.

Fortunately, we in the U of M community have the opportunity to read deeply, learn more, and share our findings with others — so that everyone’s level of knowledge may rise, as if on an incoming tide of understanding.

You (and everyone else with an Internet connection) can watch Ukraine history classes offered by Yale professor Timothy Snyder, author of “On Tyranny.” He offers his viewers challenges, as an unabashed supporter of Ukrainian democracy and also a very deep thinker. “What is a nation?” he asks his students at Yale — and his many viewers.

A new twist for From Our Collections

Becky Adamski, who has been involved in From Our Collections for years, has a stack of posters she had designed for past displays — everything from wintertime reads for relaxation, to celebrating Native American month, to displays celebrating Minnesota authors.

“They look at things from a different perspective — that’s the beauty of working with Malaika and Rafael,” Adamski says. For example, this focus on a current event is new, Tarrago says. It’s a focus that looks promising, and serves the requests of faculty and students. It could become part of the carousel of offerings from the 8 million (or so) volumes in the University Libraries collections.

“That’s what I love about these displays,” Adamski says. “You never realize how rich our resources are” until the team pulls one together. “There is a wealth of stuff that is available to our students.”

Vetruba and professor Alice Lovejoy also collaborated on building the sources — Synder was one of her teachers. And he has heard since from faculty who teach about Eastern Europe and Russia.

“I’m so glad to learn about these resources,” they tell Vetruba. “I’ll send my students.”

What is behind this invasion? Simply put, “Russia has tried to annex part of a sovereign country and persistently commits crimes against humanity,” writes Nicholas Kristof, in the Nov. 16, 2022 New York Times.

Putin wrote an essay, published in July 2021, “On the historical unity of Russia and Ukraine”; if Russia and Ukraine are not together, then, there must be other, ahistorical forces at work. Meaning foreign, exotic forces, says Timothy Snyder, a professor of history at Yale who studies tyranny.

What’s going on in Ukraine right now? Check out the New York Times, the Washington Post, and The Economist magazine, three of the many news sources available to the U of M community free, through our Libraries website. 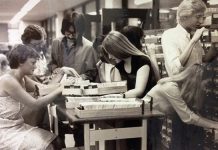 Celebrating the Health Sciences Libraries from 1892 to 2022