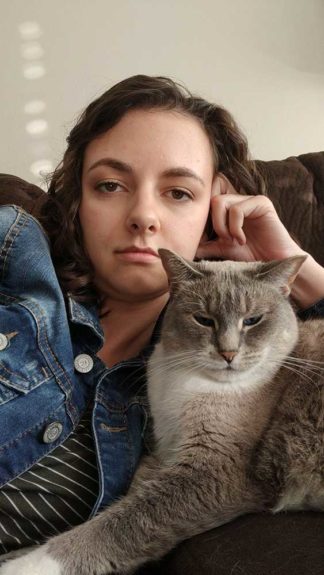 It’s been called the Great Resignation, an aftereffect of widespread cabin fever suffered during COVID lockdowns and travel restrictions that led many to reflect on their values and what they plan to do with their one wild and precious life. Among the cohort seeking a new, more meaningful path was Cassandra Grandahl, Friends of the University of Minnesota Libraries Board member. Like many who took part in the GR, she is a woman and of a younger generation.

“My hobbies became my job,” says the one-time Libraries’ student employee and English major who, after graduation, worked as publications coordinator at the American Academy of Neurology. Now she has found a new vocation.

It’s not a problem, really, says her friend and fellow board member Jessica Reza.

“She is amazing, whatever she puts her mind to.” Not only is she talented, Reza says, Grandahl is “very endearing. You feel comfortable with her right away.”

The two met as juniors while they were studying at the University of Minnesota and have remained close friends even since graduating and starting their careers.

“My hobbies became my job.”

Or, in Grandahl’s case, re-starting her career, as a birth doula.

“It is absolutely a calling,” she says. Fascinated by the television show “Call the Midwife,” she read novels about midwives and then, as she says, “progressed to reading midwifery textbooks.” (For a pregnant person and their family during pregnancy, birth, and the immediate post-partum period, a midwife provides medical care, while a doula instead provides physical, informational, and emotional support.)

“It’s intense work,” she says. “It’s hard work physically and emotionally.” She recognized that a lot of people her age feel a great deal of fear about childbirth, yet she was brought up by a mother who expressed positive feelings about giving birth to and raising children. Grandahl was trained by DONA International (formerly Doulas of North America).

She herself is slated to give birth in October. When asked if she knew what the child would be, she says: “Fingers crossed for a human being.” (Joking aside, it’s a girl, she added.)

Grandahl also is an artist and has long created embroidered and cross-stitched items, as well as making her own clothes. Lately, she has been crafting trompe l’oiel flowers from crepe paper. “It’s a lot more like sculpting than like folding origami figures,” Grandahl says.

Her aspiration to make them lifelike seems to be working. One day, her husband came home from his office to a vase of her flowers on the table. They chatted about their days — and then she asked him: “What do you think of my flowers?”

“Oh my God, I thought these were real!” he exclaimed. It is because her husband works a regular full-time job that she is able to pursue her artistry and her new profession as a doula, she explains.

Friends who are friends

“Her passion for literature knows no bounds.”

Grandahl and Reza met while working on the student literary magazine, “The Ivory Tower.” (It is now titled “The Tower.”) Grandahl was the managing editor and Reza was the poetry editor as well as the production manager. Among her outstanding characteristics, Reza says, is that situation when everyone is thinking about a question but may hesitate to voice it, Grandahl “will probably raise the question.”

They had tried, for a time shortly after they graduated, to pull together a literary journal. They did not succeed but Reza is proud of their attempt. She adds of Grandahl: “Her passion for literature knows no bounds.”

A lover of libraries

Grandahl was interviewed by Friends Board members Amelious Whyte Jr. and Edie French, and Lanaya Stangret, Events and Friends of the Libraries Coordinator, for her views as a former student worker. “We talked for a really long time,” Grandahl says. A couple of years later, they asked her to join the Friends Board.

She loves the University Libraries, from the gorgeous ceiling in Walter Library, to the cool and quiet of the East Asian Library in the sub basement of Wilson Library — perfect for studying. And, when she needed a break, she’d walk through the stacks, opening up books at random. It is amazing, Grandahl says, “how much time and knowledge and history can live in such a small space,” between the covers of a book.

While a student worker, she would sometimes find pressed flowers, preserved obituaries, or even silly things left inside the books. She urges people to go to the libraries, talk to the workers there, and ask them open-ended questions. She adds: “These people have stories.”

Grandahl says: “The Library is just an adventure. It is like strolling in the forest — getting sidetracked by books is just the best thing.”

“in time of daffodils(who know
the goal of living is to grow)
forgetting why,remember how

in time of lilacs who proclaim
the aim of waking is to dream,
remember so(forgetting seem)

in time of roses(who amaze
our now and here with paradise)
forgetting if,remember yes

in time of all sweet things beyond
whatever mind may comprehend,
remember seek(forgetting find)

and in a mystery to be
(when time from time shall set us free)
forgetting me,remember me”