The University of Minnesota’s Mapping Prejudice team and their partners at St. Catherine University unveiled a map of Ramsey County on June 15 showing just over 2,000 properties that have racially restrictive covenants in their deeds. Yet they suspect there are many more properties’ deeds that historically prevented people who are not white from owning or occupying the houses. 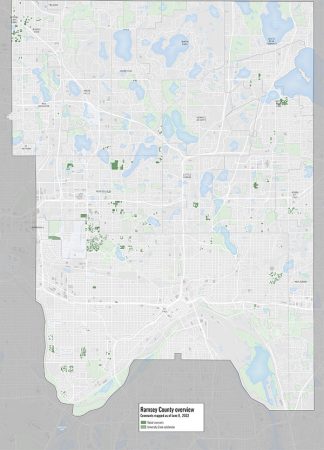 Mapping Prejudice, a project at the University of Minnesota Libraries, received national and international attention following the murder of George Floyd in 2020, because it had uncovered the skeleton of structural racism in the pattern of such deeds in Hennepin County, where Floyd was killed.

This is just a start in neighboring Ramsey County, however, for the Mapping Prejudice research project, which has been funded by, among others, the Mellon Foundation and the National Endowment for the Humanities (see all funders).

In Ramsey County, the Mapping Prejudice team collaborated with St. Catherine University’s Welcoming the Dear Neighbor? Project to recruit volunteers to read Ramsey County deeds and work with community members to create a framework of meaning for the research. The work of identifying racial covenants in Ramsey County is still ongoing. The team is working with the Ramsey County recorder’s office to identify records with poor image quality, which rendered them impossible to process with Optical Character Recognition software.

In the meantime, the Star Tribune reported: “The Ramsey County Board passed a resolution Tuesday condemning racial covenants and voted to exempt property owners from the $46 recording fee for adding a statement to their deed disavowing a racial covenant.”

“We really need [the input of] community members who know about their history, what is their experience, whether they lived in a house with racial covenants or couldn’t buy a house because of racial covenants,” she said.

Even though covenants that forbade the sale or occupancy of homes by people who were not white were legally gutted long ago, residents of Ramsey County are still grappling with the legacies of these racist practices.

Daniel Williams, St. Catherine University sociologist, was quoted in the report from Minnesota Public Radio. “Segregation was not inevitable,” Williams said. “But once segregation happened, it did effectively racialize space, and that had consequences that were really never ending.”

Along with MPR and the Star Tribune, the St. Paul Pioneer Press also interviewed people who live in houses revealed to have racially restricted covenants. “It’s an intergenerational privilege to live in the ‘protected areas,’” Carol Quest, a Highland Park resident who attended Wednesday’s event, told the reporter.