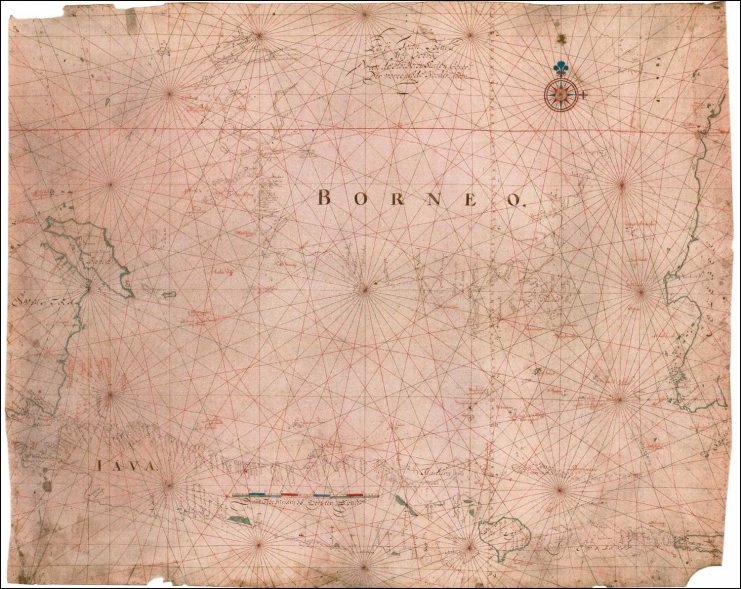 The 1672 manuscript chart, by Dutch cartographer Johannes Blaeu, was commissioned by the Dutch East India Company (Vereenigde Oostindische Compagnie or VOC) to provide more accurate information of the area for VOC ships coming from the Indian Ocean or sailing south of the region to expand trade.

Blaeu was one of a family of Dutch printer-publishers who also were mapmakers. The Bell collection contains several works by the Blaeu family, including atlases, maps and other printed works. This new acquisition, however, is perhaps the most special.

“It is one of only about 356 VOC charts that have survived out of an estimated 55,000 created between 1619 and 1799,” said Marguerite Ragnow, curator of the James Ford Bell Library.

The 31-inch by 38.25-inch map is signed and dated and is one of only five known charts of the area by Blaeu. The other four are housed in European archives.

“I am extremely grateful for the continued generosity of Ford and Amy Bell and the James Ford Bell Trust,” said Lisa German, University Librarian and Dean of Libraries at the University of Minnesota.

The Bell Library holds several maps similar to Blaeu’s — nautical charts, sometimes called portolan charts — that are focused on the sea and its coast lines rather than on land. The earliest of those dates to 1424 and the others are from the late 15th and early 16th centuries. Blaeu’s is the most recent, but represents the first large-scale, detailed chart of the Java Sea and the coastlines that define it, Ragnow said.

The southern coast of Java and the islands to the east are drawn in meticulous detail, with descriptive place-names in Dutch referring to the shape of the land as viewed from the sea. Examples include: “Lamschooft” (Lamb’s Head), “Schildpadts Hooft” (Turtle’s Head), and “Drij Kiecken” (Three Chickens).

“The Bell Library’s mission is to document the history and impact of trade and cultural exchange around the globe before 1800,” Ragnow said. “The great trading companies of the 17th century are a key factor in this. Both the British and the Dutch had East India Companies, as did the Swedes and the Danes. The French also had trading companies, but didn’t limit them to any particular part of the globe. Johannes Blaeu, like his father Willem before him, held a commission with the Dutch East India Company as official map and chartmakers.”

Three generations of the Blaeu family held the position for 72 years, from 1633 until 1705.

The Blaeu chart will be used by University of Minnesota faculty and students, as well as scholars around the world.