Three students recently were honored as Outstanding Student Employees at the University of Minnesota Libraries: Grace Dean, who works in Archives and Special Collections; Taylor McBride, from Wilson Library; and Darby Ronning, a student with a special relationship to the Wangensteen Historical Library.

The three were nominated by library staff along with others in a stellar group of student employees. Members of the Friends of the University of Minnesota Libraries’ awards committee chose the three, who, along with receiving recognition, will be honored with a $500 cash prize.

Each of the three students brought their best to their jobs:

Join us in celebrating this year’s winners.

Since September 2019, Grace Dean has worked in the Archives and Special Collections located primarily in the Elmer L. Andersen Library. She plans to graduate in December 2022 with a major in English and an intention to teach. She adapted to the challenges presented by COVID, says Pearl McClintock, who nominated her, and served during hybrid work times with flexibility and efficiency. Dean says her communication skills have improved through this work.

While doing her job, Dean says: “I often have to explain rules and why we have them to new patrons, and sometimes I need to give them reminders.” This will be helpful in her future work as a high-school teacher, she says. “Explaining rules and why we have them will be important, too. If kids don’t agree with or understand the reasoning behind a rule, they’re unlikely to follow it.” She also has learned to write more concisely, when the situation calls for it.

Working with McClintock and Cheryll Fong, Dean exceeded the levels usually expected of ASC student employees by even processing collections independently. “She completed
processing of the James Seward Ballet records, the Norwest records, and assisted in processing dozens of other collections,” McClintock writes.

Happening upon treasures in the ASC caverns also added an element of fun to her job. A former orchestra musician herself, one day she saw on a shelf “a box of Wheaties with one of the Minnesota Orchestra conductors, just sitting there.” She’s also enjoyed working with the Tretter Collection, watching a TV show from the 1980s aimed at gay people to write metadata. And, she adds, because archivists like McClintock and Fong are excited to share their work, she also learns a great deal on the job.

Her background as an industrial and systems engineering major has been a great asset for Taylor McBride’s work assisting patrons in Wilson Library. “How to optimize things — that’s a lot of what my major revolves around,” McBride says.

Supervisor Alee Schmierer says she can not only rely on McBride to close the library and train other student employees. She also finds McBride can “help troubleshoot any problems, find missing materials, or see where something went wrong to fix it.”

Yet Schmierer specifically calls out McBride’s capacity for kindness. One time, she helped a person who needed to use a screen reader to search on the Libraries’ computers, for a very long time.

“She was typing in some very complicated scientific terms,” Schmierer says. “She was very patient.”

While McBride came into college intending to build bridges, her experiences as a Libraries’ student employee have shifted her focus.

“At Wilson there are often people who come in who are homeless or need personal help more than they need help academically,” McBride says. “I would like to be able to use my degree to be of greater service to those who need it.”

She is planning to use her expertise in the health care field.

McBride has five siblings, including one in Medical School. The $500 prize that accompanied the award was very welcome in spring semester to patch a financial hole. Because most of her classes are in the lecture format, McBride says she really enjoys coming to work in Wilson, collaborating with the staff and fellow student workers, and aiding those who need it. She hopes to continue with the Libraries as a student employee until she graduates next year. 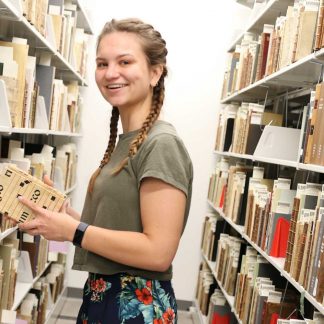 From the time that as a prospective student she toured the Wangensteen Historical Library of Biology and Medicine in its former tight quarters, Darby Ronning began developing a deep relationship with the library’s holdings, its curators, and its patrons. She started with a directed study in January 2021 and quickly became a student employee. She has worked closely with students during class sessions, helped move the extensive medical artifact collection to its more secure, climate-controlled vault, and created two online exhibits received with kudos by scholars in history and librarianship.

With a double major in history and statistics, Ronning also received a Donovan Scholarship from the U of M’s history department, to fund travel to other institutions to research her senior thesis. In addition, this fall she will undertake a directed research study working with Wangensteen Library curators to create a featured collection that will highlight women authors, printers, typesetters, and illustrators whose works are in the Wangensteen. Some of this work will be reparative, says Curator Lois Hendrickson, as Ronning seeks to identify women by their full names, instead of their married names (Mrs. John So-and-So).

And she finds enjoyment in connecting the Wangensteen to her other activities.

“For example,” Wangensteen’s Anna Opryszko writes, “while teaching French at a summer language camp, [Ronning] reached out to Wangensteen staff to use the digitized text of a French manuscript from the collection as a learning tool for her campers.”

Ronning also serves on the Libraries Student Advisory Board, which benefits from her verve. As Opryskzo writes: “Darby is exceptional in her vision for collaboration, her commitment to her work, and her intellectual contributions to the Wangensteen Historical Library.” And beyond!

Congratulations and best wishes for the future for all three of our Friends of the Libraries Outstanding Library Student Employee awardees!