If you zoom in to the 2022 Minnesota History Day this year, you’ll see a pride of young researchers from middle and high schools around the state, as well as the fruits of their research on historical topics in Minnesota, the United States, and around the globe. The statewide Virtual Awards Ceremony  takes place May 1 this year, online. Spectators can join the virtual doings via the National History Day in Minnesota Facebook page.

“In a few years, these students may come to the University of Minnesota,” says University Librarian Lisa German. “In the contemporary world, command of electronic resources that can help one seek information is essential. We are glad to contribute to their growth in skills during these formative years of education.”

A few hours in Wilson Library

The Libraries hosted nine field trips this academic year for more than 400 students from several area schools. In January, Libraries’ staff and Department of History doctoral students met the teachers from Oak Grove Middle School on a day so cold that, in their lineup outside the building, the 51 well-bundled school children looked a bit like a bison herd: blowing steam, ready to stampede into the library do some research on their chosen topics. On this field trip to Wilson, the young people were accompanied by a dozen parents, and five teachers from Oak Grove Middle School.

Meet a few of these young scholars who came to search for government documents, newspapers from the past, and books in the humanities, such as literature, history, and specialty collections like the East Asian Library.

Evelyn was unflappable when asked why she was looking at web pages about pandas on a computer that connects to the Libraries catalog and all its e-books, newspapers, and journals held in electronic format. She likes pandas; always has. Evelyn met pandas at a zoo in Georgia when her family visited; she was even able to feed them.

When she heard about the 1972 phenomenon called Panda Diplomacy, she wanted to know more. It seems a panda may be even more valuable than its black and white cuteness would suggest. She has been doing the research and has a great tale to tell of then-President Richard Nixon and his Secretary of State Henry Kissinger going to visit Chairman Mao Zedong and the Premier of China, Zhou Enlai, in 1972. China finally formally re-opened to the United States in 1979 — or was it the other way around? Ask Evelyn: She has done the research; she knows.

Two students, Javi and Evan, seated side-by-side at Wilson Library computers, are collaborating on a research topic: Parental advisory stickers and the thinking behind that policy.

“We both have a lot of [recordings] that have that sticker,” Javi says, “and we were intrigued by that.”

They are pulling up e-resources such as scholarly journals that analyze their topic.

“You can drag it and upload it to your email,” Evan explains and then shows the reporter how to do it. Demonstration over, he hunkers down over his list of resources, to seek the next one to share now and study later. Each student has been given a temporary guest log-on for the day, to gain the same privileges that undergraduates and graduate students at the U have — at least for the few hours that they are in Wilson.

During last year’s season, due to COVID, the University Libraries opened up online access to a variety of resources that would have been unavailable otherwise — or that students would have to pay to access. Libraries staff negotiated with publishers and vendors to gain this invaluable access for 2020-2021 History Day students. (See A Part to Play in History Day, published December 2020 in continuum.) That policy has continued this season.

Microfilm and microfiche are resources found at the Minnesota Historical Society’s Gale Library in St. Paul, as well as in the U of M Libraries, and in libraries of other colleges and universities around the state — but not in a lot of other libraries. Microfilm and microfiche are copies of print newspapers and other research resources photographed and transferred to readable films and small squares, or fiche, that contain multitudes.

“It’s a sometimes challenging experience,” says Phil Dudas, Information Service Manager, who has helped young History Day students look up information in these formats. Given that a special machine, such as a microfilm reader, and a certain measure of patience are needed, he adds: “They are not easy formats to work with.”

While these micro forms may seem like legacy media, “We still get new reels of microfilm for newspapers like the Star Tribune and the New York Times,” says Richmond Kinney, History Day Coordinator and one of the primary organizers of History Day for the Libraries. After all, the so-called “cloud” really is a huge set of computers, using energy all the time to store knowledge, whereas in microfilm and microfiche, researchers may have another, more sustainable source of information.

And what’s really important, however, whatever the format, Dudas says, is that “the research gives students a sense of being a researcher, which is a huge part of the History Day program.”

He adds that micro reproductions of physical print media translates into versions that are “concrete”; one can look up ads, for example, or see what stories are adjacent to that Stonewall Riot history piece one was seeking. Serendipity and openness to new ideas can be important parts of learning. Most of all, it helps to know what you are looking for before you begin your research. As scientist and inventor Louis Pasteur said: “Chance favors the prepared mind.”

Sebastian: Einstein and racism in America

Albert Einstein and racism in America is Sebastian’s chosen research topic. Einstein was not only a famous scientist, he also was refugee from the anti-Jewish policies of Nazi Germany. He was able to escape the discriminatory measures that ultimately resulted in the Holocaust — the deaths of six million Jews in European concentration camps.

As an admired scientist, Einstein may have had an easier time getting a visa to the United States than many ordinary Jewish people did. More than 800 people fleeing Nazi Germany in 1939, for example, were turned away by U.S. immigration and customs officials during their attempt to sail to America from Havana via the MS St. Louis, a German ship.

“Thank you so much for helping us have this fantastic experience. Your guidance was helpful and made it so much less stressful!”

Sebastian found a photograph of Einstein in the 1950s, talking with a group of African American students, perhaps at Princeton University, where he was a fellow in the Institute for Advanced Study. (That institute, which still exists, harbored several refugees from Europe prior to and during World War II, as well as scholars like former diplomat George Kennan, author of the theory of containment of the Soviets. Good company for conversation during the daily tea time.)

Graduate student Ntombi Mpofu had been helping Sebastian get on the computer with his access code and password. Then, it seems, she was not needed. “They are so independent,” she said of the young scholars learning to be researchers.

Some friends of Audrey, a seventh-grade student, also were exploring the same topic: The Stonewall Riots in New York City, credited with sparking the Gay Liberation Movement of the 1960s.

“It’s important to me — gay rights,” she explains. Then she returns to scanning the shelves, impressed that when she came to look for one thing, she found ranks of books on Stonewall, gay rights, and related topics. She was pumped and surprised, in a good way, by the wealth of materials available.

‘A neat opportunity’ for the students

“This is such a neat opportunity for these kids,” says sixth-grade teacher Patty Lang. “They have maps” (of Wilson Library, which has six floors and 3.6 million books, periodicals, and government documents). “They have been mapping out where to go.”

Before students are released to follow their personal trip of discovery in the stacks, micro-format resources, and on the computers, they hear from Margie Tang-Oxley and Ntombi Mpofu, who are Ph.D. students in History at the U. There are experts to help the students everywhere, including: Minitex and Libraries employees and 24/7 chat, found on the Libraries webpage.

Yet, it can be a bit overwhelming to someone new to the treasure trove of knowledge available at the U.

“I thought as a librarian I knew libraries well, but I am lost,” said Babidha Asif, a parent chaperone accompanying the young students. “It’s a nice intro to University life — it starts with the library.”

The co-location of resources at Wilson Library means that middle school students (and their parents) have access to literally millions of materials, including newspapers, government documents, and some 3 million volumes of books — compared to just a few thousand books and other resources at their school media center or local library.

“I love the libraries,” said student Omera. “I’m going to apply for scholarships at multiple schools.” Once a student applies, her friend and research partner Rachel added, “you get financial aid.” Well, that understanding is good enough for now — and it might be a topic for another day of research, about university life and how to pay for it. At least she has expertise at home, as Rachel’s dad graduated from the University of Minnesota.

The U of M Libraries are powering curiosity, discovery, and connection for History Day students throughout Minnesota.

“Thank you so much for helping us have this fantastic experience,” one student from North Lakes Academy wrote to Kinney following their visit. “Your guidance was helpful and made it so much less stressful!” 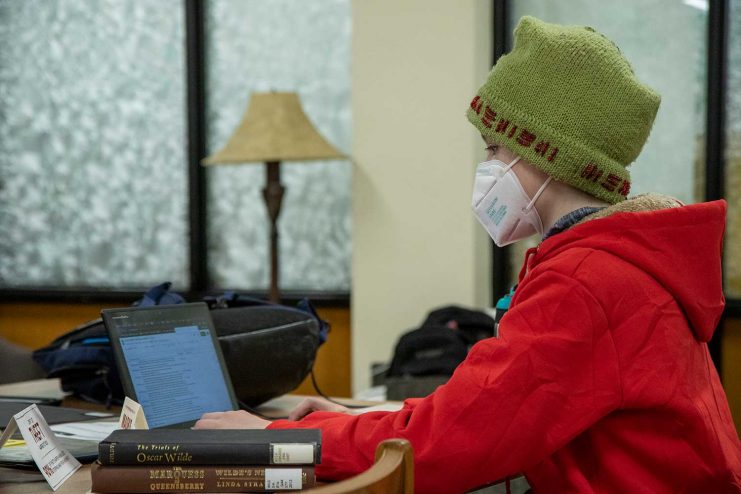