“Giving Voice to the Past: Performing the Archive” featured the University Singers performing music on March 27, 2022 that has been silent for over a century or, in some cases, never been performed. The musical scores are archived digitally by the University of Minnesota Libraries and are available on the English Heritage Music Series website.

Along with the University Singers, the event featured emcee, Bradley Greenwald, who also performed; Matthew Mehaffey, U of M Professor of Music; Dave Fielding, a self-described music “archaeologist” and the driving force behind archiving the music; and U of M Music Librarian Jessica Abbazio.

The event was held a the University of Minnesota’s Coffman Theater. 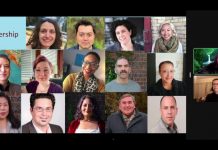