According to many Sherlockians, including Christopher Morley, Mr. Holmes was born on Jan. 6, 1854. When the Saturday Review of Literature (which Morley helped establish) planned publication of an issue for Jan. 6, 1934, Mr. Morley thought an 80th birthday party for the Great Detective — over cocktails at the Hotel Duane — was in order. In this irregular fashion, made regular, and an annual observance six years later by a vice-president for General Motors, Edgar W. Smith (who took the reins from Morley for the group, now styled as “The Baker Street Irregulars,” aka the BSI), the oldest Sherlockian literary society in the world came into being.

Over the decades, these Holmesian birthday celebrations expanded beyond cocktails and dinner to include lunches, brunches, lectures, exhibits, walking tours, meetings, merchants, open houses, late-night pub hops, and more. The center of attention has always been Mr. Holmes, but the friendships and acquaintances gained through these annual gatherings are equally treasured.

This year’s BSI (long) weekend began on Wednesday and concluded sometime late on Sunday. Main events such as the Distinguished Speaker Lecture (Thursday night) or invitation-only dinner (Friday night) were held at the Westin Grand Central Hotel and Yale Club respectively, but other Manhattan venues featured throughout the weekend. 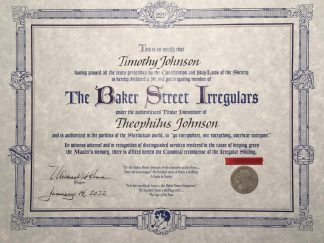 I have attended several BSI dinners as a guest during my tenure as curator of the Holmes Collections. This year I arrived late Wednesday afternoon, my lodgings a block from the Chrysler Building. My itinerary — mapped out before departure — included an inaugural “Doylean Awards” celebration; viewing Glen and Cathy Miranker’s exhibition, “Sherlock Holmes in 221 Objects,” at the Grolier Club; a visit with Otto Penzler of Mysterious Bookshop fame; wandering through “Covent Garden West” with its tables and wares of Sherlockian goods; the BSI Friday Dinner and Saturday Luncheon; and a smaller dinner gathering of “The Pondicherry Lodgers of 44th Street.”

It was the Mirankers’ exhibition, seen on Thursday, which set a tone for the weekend. In a word, their display was stunning. In more than a word, this sample from the Miranker collection brimmed with excitement, joy, curiosity, and generosity. These 221 objects — from a collection of thousands — also demonstrated Glen’s character as a collector, of one who has “a pleasurable obligation to make their stuff…available to interested people.”

On Friday morning, I hopped an express subway to City Hall and a short walk to the Mysterious Bookshop on Warren Street in Tribeca. Along the way, I stopped to admire City Hall from the outside (now closed to tours), “one of the oldest continuously used City Halls in the nation,” first occupied in 1812. A visit to New York is always a little bit more than Mr. Holmes.

At the Mysterious, I was greeted by Otto Penzler, and for the next half hour, surrounded by books, we chatted. Otto is a publisher, editor, and collector extraordinaire (in addition to owning one of the best bookshops in the world). He is also a very special friend of the Sherlock Holmes Collections, having supplied us over the years with most of the current Sherlockian books as well as collected rarities. I treasure his friendship, both personally and professionally.

One of my traditions when visiting Otto’s shop is to purchase a personal copy of a non-Sherlockian work for my own collection. This year’s acquisition was John le Carré’s final novel Silverview, published posthumously. I enjoyed a bit of the novel in my room before preparing for the Irregulars dinner.

The dinner is black tie optional. I acquired a tuxedo for my first feast in the late 1990s. This year I complemented my wardrobe with a medallion made by Maggie Schpak and presented to me on the establishment of the E. W. McDiarmid Curator endowed position in 2010 by the Friends of the Sherlock Holmes Collections. Maggie is a BSI member who specializes in jewelry and metalwork for American television and film productions, including “Star Trek” and “Raiders of the Lost Ark.” Imagine my joy when arriving at the Yale Club that it was Maggie who pinned the name tag on my tux. “I’m very touched,” she said, as I pointed out her medallion.

It was a joy to see so many people in person after two years of virtual meetings. After the reception, at which our own Jennifer Olson was named “The Woman,” we found our seats and the dinner commenced. My program made its way round the table, signed by each guest, another memento from the evening and a record of my tablemates. The annual dinner includes “the usual toasts, rituals, and papers.” This year we enjoyed presentations on Chicago Irregular and newspaperman Vincent Starrett; the celebrated author Rex Stout; and an original song, “The Gold Queen’s Revenge” (reminiscent of “The Problem of Thor Bridge” and sung to the tune of “Bridge Over Troubled Water”).

Near the end of the dinner the hall quieted as we remembered those Irregulars who passed away during the last year. This time to “stand with me here upon the terrace” remains a touching moment during the evening, a reminder of friendships and memories.

As the evening moved to its conclusion it came time to announce “The Birthday Honours List,” an Irregular nod to the British monarch’s tradition of bestowing recognition in the New Year. The room brightened in anticipation as Michael Kean, head of the Irregulars (aka “Wiggins”), read each name. Membership in the BSI is by invitation only, bestowed by Wiggins based on recommendations from members to those who distinguish themselves through Sherlockian activities. It is an honor to be considered for membership.

I celebrated as each name was read, but somewhere along the way my ears started to hum. I lost all track of my surroundings as the room erupted when my name was read. Numbed by the excitement, joyful in the proceedings, I made my way to the dais and received my investiture from Michael. By tradition, each investiture title is taken from one of the 56 short stories or 4 novellas in the Holmesian canon. My investiture is as “Theophilus Johnson,” a character mentioned in chapter five of “The Hound of the Baskervilles”.

This delightful, surprising, and celebratory evening ended with a recitation of Vincent Starrett’s Sherlockian sonnet, “221B.” Many more handshakes and congratulations followed me out of the Yale Club and back to the hotel where I observed another tradition for newly minted Irregulars: staying up until 2:21 Saturday morning.

My last gathering of the weekend was a quiet and convivial dinner with members of The 44th Street Pondicherry Lodgers (a nod to “The Sign of Four,” one of Doyle’s Sherlockian novels). About 20 or so friends gathered around the table of an Indian restaurant. Across the table from me sat Glen Miranker.

The weekend came full circle as we enjoyed the table’s company while Glen and I talked about cryptography, another of his collecting interests. I was reminded of Glen’s comment at the Grolier opening: “I can’t imagine a more convivial, more passionate, more knowledgeable collection of folks. And I count many, many, many of them as wonderful acquaintances and an unfair number of them as friends.” It was the perfect ending to an ideal Irregular weekend in New York.