The Immigration History Research Center Archives (IHRCA) at the University Libraries is very pleased to announce its next Grant-in-Aid awardees.

These awards support travel to the IHRCA at Andersen Library to advance the awardees’ research. Awards are available through co-sponsorship from the IHRCA and campus partner, the Immigration History Research Center.

Ayivor’s project is titled Residency Decisions of Higher-Level Academic Migrants in the US: The Case of Doctoral Recipients from Sub-Saharan Africa. As summarized by Ayivor, the United States known to be home to over a million international students mostly from Asia, Africa, and Europe. Students on non-immigrant status have three choices upon graduation. They could either return to their countries of origin, register for the optional practical training (OPT), or return to a neutral country with career prospects. The post-graduation choices are dependent on various factors. The research for this project will examine the factors that influence the post-graduation migratory decisions of this most-needed, highly skilled labor force. A quantitative study used data from the National Science Foundation’s Survey of Earned Doctorates; sources from the Immigration History Research Center Archives will complement the quantitative data to provide some historical perspective. The goal of the study is to inform leaders in both the host nation and the country of origin to implement policies that will strategically benefit their economies and global society at large.

Aviyor is currently pursuing a Ph.D. in Higher Education at the West Virginia University.

In the research project Refuge in Name Only: The Specter of the Economic Migrant and the Decline of the American Refugee and Asylum System, 1975-2000, Beaudreau will use sources in the Archives to continue her dissertation analysis of how the economic migrant category became a catch-all category used by the executive and legislative branches to deny entry to increasing numbers of border crossers. This reveals how the economic migrant category was used to criminalize poor, non-White border crossers seeking admission into the United States. By shifting our focus to the post-Cold War period and to individuals who were denied refuge and asylum, Refuge in Name Only challenges the way we understand American refugee and asylum policy and the labels used to categorize border crossers. Beaudreau will particularly make use of the United States Committee for Refugees and Immigrants records; USCRI was a key refugee advocacy organization during the period under study.

Beaudreau is a Ph.D. Candidate in the Department of History at the University of Illinois at Chicago.

Immigration as A Source for Unacknowledged Invisible Labor: Archival Evidence is the title of Chakravarty’s project. This exploratory research project seeks to understand through archival records the nature of invisible labor—a form of labor that is unacknowledged and uncompensated, but crucial to functioning of social institutions and organizations. This form of maintenance labor stays in the background as groundwork for building, maintaining, and sustaining institutions. Research questions include: What is the nature of invisible labor? What are the characteristic features of invisible labor? Who is more likely to receive demands for and perform invisible labor that sustains social institutions? How does invisible labor further marginalize always already marginalized groups? Chakravary argues that the invisibility of labor is connected to invisibility of identities, and is seeking to understand this invisibility at the intersections of gender, race, class, location, faith, ability, and immigration status/nationality; this last category brings them to the IHRCA.

Zarook’s project, The Evolution of the American Security State during the Long McCarthy Era, 1947-1958, centers on the deportation and persecutory campaigns of the long McCarthy era, wherein Zarook notes that calculated collaboration was required between various wings of the federal government to facilitate the notorious political repression of this time period. Through the use of the Kenneth Enkel Papers, Zarook will explore how the United States government carried out early deportation proceedings, and how the so-called “undesirable” immigrants at the time were occasionally able to avoid the state altogether and defend themselves without formal protection from the constitution. This project will touch on the politics of bureaucracy, security, xenophobia, and the polarization of party politics in the United States.

Zarook is a master’s student at New York University. 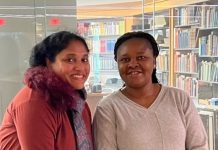