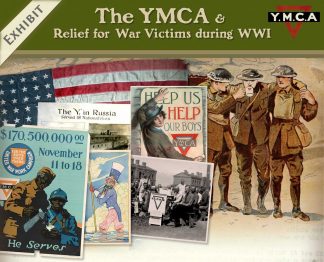 Between 1914 and 1918, one of the largest, deadliest wars ravaged much of the world. As tens of millions became entangled in the conflict, men and women from the Young Men’s Christian Association [YMCA] waged a parallel fight — a fight to comfort, heal, and uphold the spirits of those impacted by the war.

Ultimately, the YMCA deployed 25,926 men and women at home and abroad in the trenches, training camps, leave areas, and prisoner-of-war camps.

This exhibition explores these courageous actors and the significant aid they provided to the armies and civilians of both the Central and Allied Powers, and is made possible through the recent acquisition of the personal papers of Rev. Walter Teeuwissen, a YMCA Chaplain who served Austrian-Hungarian war prisoners in Siberia.

Initially set to open in 2020, this exhibit was a companion to the conference “Relief, Culture, and Allegiance: Humanitarianism in World War I and its Aftermath,” which was canceled due to the pandemic. With gratitude we thank the conference organizers Dylan Mohr (University of Minnesota), Lena Radauer (Albert-Ludwigs-Universität Freiburg) for their curatorial contributions.