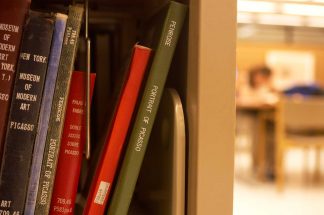 Overdue fines can add up quickly, as students and graduate students know from past years, when each day an item was overdue added 50 cents to an individual’s bill. From 2015 to 2019, overdue fines from the entire University Libraries’ system averaged about $33,000 annually, paid by 1,277 users.

Fines have hit hardest those who can least afford it — poor students, says Jimmy Arnold, a Libraries’ student employee who will be a senior in cultural studies this year. He’s excited that the Libraries will no longer charge fines for overdue materials — except in very few cases, such as for lost books or when books are borrowed from other universities.

“It’s a diversity, equity and inclusion issue,” says Lisa German, University Librarian and Dean of Libraries. She credits public libraries for leading the way in eliminating the regressive practice of overdue fines.

“Hennepin County got rid of their fines — why can’t we,” she recalls thinking last year. “I think we have a lot to learn from our public library colleagues.”

“As soon as we shut down, we stopped overdue fines and replacement fees. … We didn’t want [students] to have this additional stress.”

The Libraries administration was already considering ending the practice of overdue fines when the pandemic hit, which in some ways forced the issue. In March 2020, the University’s spring break was extended — and then students, faculty, and staff were not able to return to campus because of the COVID emergency shutdown.

“As soon as we shut down, we stopped overdue fines and replacement fees, because students were all over the place,” says Kirsten Clark, Director of Library Enterprise Systems. “We didn’t want to have this additional stress, on top of everything else, to get their materials back to a physical space like the Libraries.”

Moreover, there simply weren’t many ways to return books and other items. The Postal Service was slowing down and, without staff in buildings, the Libraries had to expand the reasons that people were not able to return things.

The pandemic also brought about a shift to more electronic materials, Clark notes.

“As we shifted how libraries are interacting with our students to more electronic resources, that has allowed us to say let’s shift the focus to how we ensure we are good stewards of our resources — but not in a way that is going to be a hindrance to our students, especially monetarily.”

The pause in fines and fees because of the pandemic led Clark and others to review the process.

“We learned that overdue fines in particular aren’t really an incentive to get things back,” she says. “We just want the items back. We use state funds to purchase them, we want to make them available for other students to use.”

If items are lost — or people aren’t getting in contact with Libraries’ staff — a replacement fee can be charged. And, when items are needed for a specific purpose, Libraries’ staff can initiate a recall that might result in a fine. But in general, overdue fines are no longer charged.

Once the policy changed, removing old overdue fines from the system was somewhat complicated and involved running multiple reports, Clark says. Another challenge was making sure the policy was being implemented correctly “in a very complicated back-end system involving many locations, millions of items, and the five system campuses,” she says.

“To the credit of all the amazing staff at all five campuses, we did it. It was a lot of people working together to move it forward and make sure this was a positive change all around.”

Arnold is among those favorably impressed, saying any student would support it.

“People are looking for ways to increase access,” Arnold adds. As well as reducing stress for student users, this change also reduces the time Libraries’ staff need to spend discussing waiving fines, resulting in relief all around.