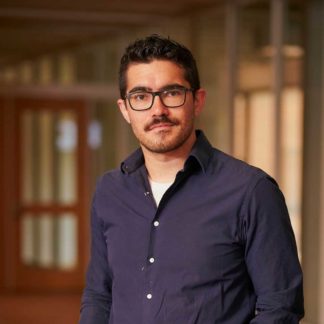 His natural bent would be toward contemplative study, says Joshua Preston, Friends of the University Libraries board member. But when he sees principles of justice violated, he must speak. He must act. As a soldier in the Minnesota National Guard and as an attorney, Preston has done both.

He also has nurtured his love of poetry and appreciation for archives while seeking to find his place in the world. And he has found a welcome role on the Friends Events Committee.

Preston grew up in Montevideo, Minnesota, a small town in the Minnesota River Valley in the western part of the state. As a young adult, he felt very self-conscious about his roots in the rural Midwest. “I’m on the edge of civilization, I’m on the edge of history, nothing ever happens out here,” he remembers thinking. “I’m in the backwaters of the world.”

But then he was excited to discover the rich literary history and culture of the area through the works of essayist Paul Gruchow, poet and essayist Bill Holm, poet Robert Bly, and writer Frederick Manfred.

“That love for poetry and for writing can connect us to place, to articulate and address grief and joy, all that was just tremendously impactful.”

“We aren’t on the edge of nowhere,” Preston says. “To use Bill Holm’s phrase, ‘the heart can be filled anywhere on Earth’ — there is value and worth in these communities.”

Bly particularly impressed him with his writing, his political involvement in the 1960s, and his founding of a men’s movement. Bly wrote about places where Preston grew up and also shared grief about failed relationships that mirrored Preston’s. He branched out into reading works by people in Bly’s network, such as poets James Wright and John Berryman.

“That love for poetry and for writing can connect us to place, to articulate and address grief and joy, all that was just tremendously impactful,” he says. He has pursued writing his own poems although he is not ready to share them.

And, once he understood that archives are not esoteric places that require scholarly credentials to explore, he dug into collections of papers by Bly, Berryman, and others held at the University. He was inspired by drafts of “Silence in the Snowy Fields” by Bly and “The Dream Songs” by Berryman. Finding the unexpected was a thrill. “A hastily scrawled letter in pencil to Berryman, written by Ezra Pound while he’s in the mental hospital — it’s amazing,” Preston says.

Preston moved from the quiet of consulting archives into a local media spotlight earlier this year. Following the Jan. 6 attack on the U.S. Capitol, the Minnesota National Guard in which he serves in an infantry position sent a notice that its members “must remain apolitical.” In response, Preston wrote its leaders a 12-page memo with his recommendations for dealing with extremism in the ranks and his objection to what he saw as attempts to stifle soldiers’ responses to the insurrection.

He also posted on Facebook that the state National Guard should remove right-wing extremists from its ranks, a stance covered by Fox News, a WCCO radio show, and a Star Tribune news story.

In April, he wrote an article for MinnPost detailing a briefing by a Minnesota National Guard officer to his battalion about extremism. The group mentioned the Ku Klux Klan and the Black Panthers as extremists; no other groups were identified by name. The officer, however, called “George Floyd Square on 38th & Chicago a site of ‘lawlessness,’ ‘unlawful influence,’ and ‘destruction of property,’” Preston wrote. “He predicted that ‘when law enforcement goes to clear it, there’s the potential people may lose their lives because they’re not going to let it go easily. That’s extremism to me.’”

Preston does not agree. He sees a greater threat to the military from extreme right-wing and white supremacist organizations. He had not, as of late June, received any response to his memo from the National Guard.

The bulk of Preston’s legal work is representing people involved in protests against Enbridge Energy’s pipeline, known as Line 3, which would replace an old pipeline.

Preston began his law school years at the U of M with a focus on the use of science in courtrooms. But as a person of Mexican-American heritage, his attention was caught by the Trump administration’s detaining children in overcrowded camps near the U.S.–Mexico border. He went to see for himself a Texas tent facility where unaccompanied children were kept behind fences of barbed wire and black plastic.

Walking by the tent at night, he heard their voices — and for him, these children could in no way remain an abstraction. He was moved to a new perspective. “If I’m getting a law degree, then I should use it in a way that’s going to help others.” After he graduated in 2019, he took some time to figure out his direction. (COVID extended that period of reflection.)

Now the bulk of his legal work is representing people involved in protests against Enbridge Energy’s pipeline, known as Line 3, which would replace an old pipeline. (Most of the work is pro bono.) He also helps those he is not formally representing, he says, “who may want to represent themselves or are very new to the legal process and are scared.” He offers a sympathetic ear, some reassurance, and an ability as an attorney to call the jails where those arrested are kept.

“They won’t hesitate to say it feels lonely.” Preston tells them: “Remember, the world feels very small from a cell but there’s a huge community out here and a huge team of lawyers, of which I’m a part, to make sure you won’t go through this by yourself.” Compassion combines with his principle of helping those in need.

A new series for the Friends

To have the opportunity to serve the University as a member of the Friends board is an honor, he says. In this, his first year, Preston belongs to the Friends events committee, which has conceived of a series for this fall, “Amplifying Black Narratives.” Archives of Black literature, arts, and culture, Black publishers and bookstores, and Black writers will be celebrated in a series of three panel discussions.

“We owe it to ourselves, our community, to find this voice,” Preston says. And to continue to improve our Libraries.