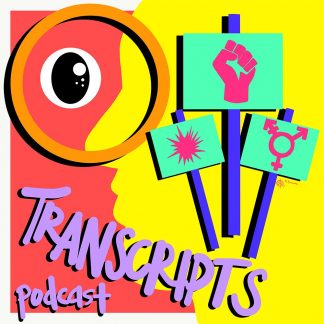 Fans of the Transcripts podcast — a project of The Tretter Collection in GLBT Studies that first launched in June 2020 — have something new to get excited about: another new podcast episode. In the recently released Episode 2 of, Transcripts focuses on trans people of color housing activists who were interviewed for the Tretter Transgender Oral History Project (TTOHP).

One of those quoted in the podcast is Toni-Michelle Williams, a Black trans woman.

“Never really having a home but always wanting to find a home, always desperately looking for love and a family, while also discovering who I am,” says Williams of her experiences.

She encountered bullying and abuse while growing up and has struggled during her search for belonging. Yet she survived and has put roots down in Atlanta. The stories of Williams and five other Black and multi-racial trans people who live in the South are told in Transcripts’ Episode 2, “The South Deserves People Like Me.”

“Trans life in the South seems almost unimaginable to people who think of the South as backwards,” he says. But the largest percentage of LGBT people in the United States live in the South — about one in three.

The pain of homelessness

Trans people particularly feel the pain of not having a home because they so often experience homelessness. “When you narrow the focus to trans women and trans women of color, that rate of homelessness is unimaginably high,” Beam says.

In response to this, a range of trans activists are focusing their efforts on housing justice. For instance, Mariah Moore and Kayla Gore, who are two people featured in the podcast, created housing projects run by Black trans women for Black trans women. Moore developed the House of Tulip in New Orleans and Gore is working toward building 20 tiny houses for her community in Memphis, Tenn.

Tone is very important in telling these stories in the podcast, says Cassius Adair, Episode 2 producer. “We’re really focused on making sure that trans stories are neither tragedy, trauma, pity stories nor are they one-note, triumphant, everyone overcame all of their oppression and now everything is great stories.”

The power of podcasting

The podcast is based on oral histories conducted by Beam and by Andrea Jenkins, the former Oral Historian for the project and current Vice President of the Minneapolis City Council. This is exciting to Beam because “people get to hear these amazing stories, and to get to hear people’s stories in their own words and their own voices . . . [with] complexity and nuance and richness.” This perspective allows the team to counter typical media portrayals that tend to “flatten trans people . . . whether they are problematic representations or positive,” Beam says.

The popular podcasting format also opens a way into the hundreds of hours of oral histories, which can be overwhelming. With so much material, it’s not easy to know where to start, how to make sense of it, and how to fit the stories into a context. The podcast seeks to makes the voices and information contained within the collection more accessible

With the goal of creating something with the finish of a public radio show, producer Adair directs the storytelling aspect of the Transcripts podcast. The script is created with Beam using transcripts from oral history interviews, then is read by others for cultural sensitivity. With a diverse group of people, he says, it’s important to be thoughtful about the ways people’s lives are being portrayed.

In addition, Adair advised those on the project not to showcase one individual heroine or hero. Instead, they were showing a collective portrait of a community. While it can be easier to focus on one central character, Adair wanted to be sure for a community that has so little representation that several people were highlighted.

Adair also directs the soundscape. “I gather my team of audio people and we try to make it into something that sounds like something that would be on public radio,” he says. A musical director named “Homoground” sought out musical artists who are trans or queer and from the South. The music and audio effects like walking in nature are selected by sound designers Sam Leeds and Ariana Martinez “who are experts at listening to where should this musical note come in while this person is saying this part of their story.” The result is an immersive, collective portrait for listeners.

Challenges met and the one that remains

Beam says he has experienced quite a learning curve with podcasting — “audio storytelling is a whole new world for me.” But guided by Adair’s expertise, he found the process practically painless. And, beyond writing, he gained a new way of communicating with people.

Still, one challenge remains: finding funding. Each of the two episodes of Transcripts have been funded by different institutions, Beam says, and the Tretter’s most recent request for a grant was turned down. Still, the collection hopes to find the dollars to keep depicting these very human portraits of trans people through Transcripts.

Is the Makerspace my space?