Terrestrial and celestial globes created in 1696 arrived at the University Libraries the day after the shutdown for COVID-19 last year, destined for the James Ford Bell Library. Curator Marguerite Ragnow wanted to figure out how to put them on the web but initially she was stymied.

Then a breakthrough appeared in January 2021, when 3D scanning in the Health Sciences Library and Wangensteen Library was discussed in a presentation by Jonathan Koffel, Emerging Technology and Innovation Strategist. “I emailed him during the meeting,” Ragnow says. “How do we get in on this?” Koffel was eager to explore how he and his team could support the creation and sharing of 3D scans. The globes offered a valuable trial. 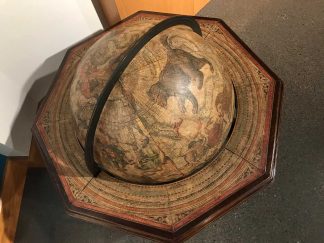 The globes, about 15.25 inches in diameter, were created by well-known Venetian cartographer Vincenzo Coronelli. He modeled them on globes he had made for the French king, Louis XIV, which were a staggering 4 meters in diameter.

“These globes are thanks to the James Ford Bell Trust and Trustee Ford Bell,” Ragnow says. “It was terrific to partner with him on this important addition to the Bell Library.”

Globes were very popular in the early modern era as a sign of sophistication and scholarship; they can be seen in paintings of the time, such as Vermeer’s The Geographer. The Bell Library already has several examples of maps by Coronelli, which is why Ragnow chose his globes over others that were available.

“We like to build a picture of a body of work, if we can, for scholars,” she says. “It’s helpful to know what else authors/artisans are working on, how their perceptions changed, or how they adapted their work to fit a different medium.”

While scholars do know the Bell Library well, the general public does not. Raising the Library’s public profile has been a continuous goal since the founding of the Library in 1953. Maps and globes can work well for public outreach, Ragnow says, because people like them — and globes are tangible.

“You can think of the object better than you can a flat piece of paper.” Showing the two formats together helps students and others think about how knowledge is manifested, she says. 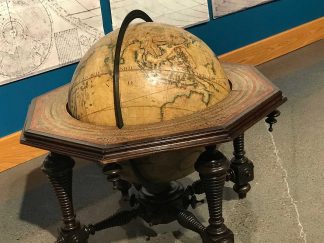 One of the challenges of the digital age, Ragnow says, is that people keep predicting it’s the end of the book. But the Romans used scrolls and called them books — a book is about the content, not the physical form. What we think of as a book is, technically, a codex.

“With the globe, it’s easier for students  to get their minds around the fact that we have different containers for knowledge, but it doesn’t change that knowledge,” Ragnow says. “It doesn’t necessarily change how we organize the knowledge inside the container. Because an author can write a book but it’s the publisher who selects the final format. It can be printed and packaged in a codex. Or it can be typeset in HTML and you scroll through it — like one scrolled through an old Roman scroll.”

With the globe and map, they see the same content in different formats.

Now these globes are taking on another format through 3D scanning. Although the Health Sciences Library has 3D scanning capability, they are just getting started, Koffel says. He and Ragnow decided that the globes project needed specialized expertise. Koffel brought in someone he had worked with previously, Samantha Porter, Advanced Imaging and Visualization Research Associate from the Advanced Imaging Service for Objects and Spaces, which is part of LATIS (Liberal Arts Technologies and Innovation Services) in CLA.

There are different types of 3D scanning. For this project, photogrammetry would allow Porter to create the scans from photographs. “If the main purpose is to share something with the world and show people what that object is, then it’s important that it looks good and works well for viewers,” Porter says.

Porter brought the equipment to Andersen Library, where she, Ragnow, and Multimedia Specialist Charlie Heinz gathered around the globes. She took photos from as many positions as possible — but not so many that the computer would be overloaded. Back in the AISOS lab, Porter uses Agisoft Metashape to match up reference points, based on colors, patterns, and contrast, among different photographs. As those reference points are connected, Porter says, “we can overlay pixel data from those images.” The Libraries’ staff is learning more about the process as she proceeds.

Porter has melded the images into 3D representations of the globes, which requires exactitude and artistry. She will add animation, so that Ragnow will be able to include images of spinning 3D globes in the web presence, as well as description.

“Once Sam has done her behind-the-scenes magic,” Ragnow says, “I’ll be able to create a web page.” And, when the gallery opens in Andersen, the globes will be placed in the Bell Room, for scholars to study and others to enjoy — in three dimensions. 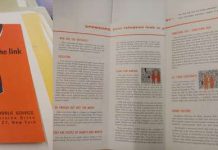