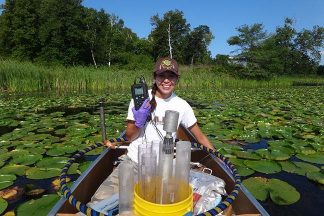 The University’s Water Network is virtual, a response to the need seen by the already established Water Council to provide new ways for researchers to connect, particularly during the pandemic.

“Water scholarship at the University of Minnesota has always been huge and spread out,” says Bob Sterner, Director of the Large Lakes Observatory. “It’s been very difficult to coordinate it or to have a sense of purpose among this diverse and large community.”

Sterner serves on the executive committee of the Water Council, which brings together resources from across the University system to address access to clean water in the 21st century, under the aegis of the Office of the Vice President of Research. He helped organize the Water Network, which is much less formal.

It’s “a ‘gather around the water cooler’ sort of thing for people all around the system who are engaged in research around water,” says Jan Fransen, the Libraries Service Lead for Research Information Management Systems, who was a member of the working group who developed the Water Network.

“This is a purposeful attempt to create a place for people for a certain scholarly bent to meet together and to work together,” Sterner says, no matter which campus they are on or what department they belong to.

To arrive at its Jan. 27, 2021 launch, however, a meeting place had to be built for scholars. And they needed a way to learn about each other’s work.

When the Water Network was first being envisioned, a member of the executive committee suggested that Ben Wiggins, Director of the Digital Arts, Sciences, and Humanities (DASH), might be able to help with some technological solutions. DASH is an alliance of nine units, including the Libraries. Wiggins introduced Sterner to DASH RAs Chae Hong and Lyssa Miller, who created the website.

It was their first website based on Google sites so that they could take advantage of Google groups in connecting faculty, graduate students, and undergraduates across several campuses, Hong says. “It was pretty intuitive but [somewhat] limited in design choices.”

Still, Sterner says, “their design talents really added to the site. We get compliments on how great the website looks.” They also needed information about all these researchers’ work, which was already being collected at Experts@Minnesota, a U of M research collaboration website managed by Fransen.

“I see this as a really great example of how to leverage the resources we already have, without having people do duplicative work.”

So, Hong and Miller incorporated a custom widget, built with the help of Chris Dinger (a system architect in Health Sciences Technology) and Michael Berkowski, to pull information from Experts@MN. New members of the Water Network fill out a form that goes to the person maintaining the mailing list and also to the Experts team, who tag the person. Fransen goes in weekly to tag members’ publications, and “then the widget feeds the website.”

Fransen gains satisfaction from helping to facilitate connections among these researchers.

“Beyond the Water Network, I see this as a really great example of how to leverage the resources we already have, without having people do duplicative work.” The approach could be used by other informal networks, too.

By the end of its first week, the Water Network had 100 members and now it is approaching 200. Five Water Circles have been organized (with more coming), on topics like Creating a Stormwater Research Center of Excellence and the Culture of Water. The weekly unscripted Water Cooler meetings will be taking on topics in the near future.

And, the executive committee wrote to members recently, “we’ve partnered with the Institute for Advanced Studies on a funded working team on Water, Equity and Justice. A lot is going right!” All of which adds up to a promising beginning for the new Network.