Recently, an alumnus contacted University Archives saying he received his diploma in 1968 by mail because the commencement ceremony was canceled due to rain. While reconstructing the events of that June day, he asked, how was he notified of the canceled program?

In a world where we are instantly notified, it can be a useful exercise to understand how things used to function.

To answer the question, University Archives staff consulted two contemporaneous documents–the June 1968 commencement program and a June 4, 1968 press release detailing the forthcoming June 8 commencement ceremony. Both documents provided the same information: “In case of threatening weather, KUOM [radio] will carry frequent announcements of any change that may have been decided upon.”

Scheduled to take place on the field of Memorial Stadium, the press release detailed how inclement weather would affect the event.

“In case of hard rain, the commencement will be held in Northrop auditorium. Then only the graduates will enter the auditorium, without any procession. Each graduate has been issued two rain guest cards in his packet which will entitle that number of persons to go to designated rooms on campus and listen to the exercises being piped in by loudspeaker. Extra rain guest cards are available for several rooms and auditoriums, and may be picked up at 220 Morrill hall through Saturday.”

Yet, if the weather forecast was less severe, the press release read, “In case of light rain, rain gear will be issued and the commencement will be held in the stadium.”

In either situation–a hard or light rain–there is no scenario where the ceremony might be canceled. So, why did the graduates have their diplomas mailed to them?

The Sunday, June 9, 1968 issue of the Minneapolis Tribune provides an answer. The commencement ceremony began as scheduled on the field of Memorial Stadium, however, according to the report, “rain began to fall in earnest just as University President Malcolm [Moos] was two paragraphs into his address to the graduates.” At that point, Moos stopped his prepared remarks and declared the students “instant graduates” as attendees, and the 4,000 students, ran off the field to take cover.

The rain forced the commencement program cancelation mid-event. The severe storm prevented the graduates from receiving their diplomas on the field. 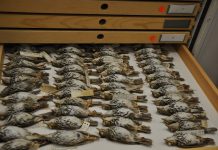 Visiting the past to inform the future