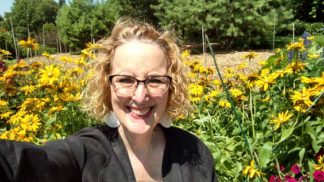 Catherine Jordan’s ability to make things happen has served her and organizations well, as she has been weaving arts, education, and health into her career tapestry.

“I have been able to design and build things — whether a program, an event, or an organization,” says Jordan, Chair of the Friends of the University Libraries board.

In the 1970s, Jordan was one of a group of five women hired by free clinics to train teenagers to be health educators for their peer group. They focused on reproductive health, preventing drug abuse, and improving mental health. Jordan taught the teens video production and theater techniques to help them effectively spread “good and positive information.”

As well as teaching other youth workers how to talk with teens about sex, she also taught parents how to do so. With high school students, she produced and directed an award-winning video, “All of Us and AIDS.”

Forty artists formed a cooperative called the Women’s Art Registry of Minnesota (now the Women’s Art Resources of Minnesota) in the late 1970s. They did not need another artist, Jordan says, but an administrator — so they recruited her. Among a variety of initiatives, she helped the artists set up a mentoring program, pairing women artists new to the field with more experienced ones.

“The mentors would advise them how to set up a studio, establish a relationship with a gallery, develop their artistic ‘voice,’ and make a living,” Jordan says.

The year-long mentorships were funded with grant money and were in many ways successful. Jordan benefited, too.

“I received my arts education,” she says. “I didn’t get an MFA, but I had five years working with artists and learned a great deal from them.”

“I see myself as entrepreneurial, an innovator, a creative force. My work in the arts has served me well in everything I do. It’s generative.”

After 9/11, Jordan was seeking a way to pursue her best and highest purpose. She found it as the first president and CEO of AchieveMpls. She merged the Minneapolis Public Schools Foundation with Youth Trust to create Achieve, whose mission is to galvanize community resources to support student success. One initiative promoted arts in the schools for academic achievement. For example, she says, a working artist might be placed in a biology classroom and during dissections, teach drawing skills to the students.

Another avenue for student achievement was the STEP UP program, a collaboration with the City of Minneapolis, through which high school students could apply for paid summer internships. The teens were trained in basics like resume writing and interviewing skills.

“They learned to show up with a positive attitude,” Jordan says. Prior to COVID, about 700 students a year participated in the program. (Now CareerForce Minneapolis and Project for Pride in Living also are partners in STEP UP.)

“We helped students see what was possible and how to prepare for their futures,” Jordan says.

Principals gave permission to build out dedicated spaces, and AchieveMpls raised funds to  bring in their own computers and staff. The CCCs formed partnerships with school counselors so students would have necessary resources to explore their postsecondary options. Now these centers are based in 11 public high schools in Minneapolis and St. Paul.

Joining all these accomplishments are Jordan’s sense of herself and her skills.

“I see myself as entrepreneurial, an innovator, a creative force,” she says. “My work in the arts has served me well in everything I do. It’s generative.”

The risk-taking Eleanor Roosevelt is one of her role models, as is DeAnna Cummings of the McKnight Foundation, whom she describes as a visionary community organizer.

Jordan was invited to the Friends of the Libraries board by her friend Judy Hornbacher. The first time she was asked, she was too busy — but Hornbacher was persistent. Since joining, she has enjoyed making personal friends among the interesting people on the Friends board.

Jordan is enormously impressed by what the Libraries offers not only to the University but also to the entire community, particularly through the Friends Forum: A Series for Curious Minds.

“Resources like Umbra, the Givens Collection, and Mapping Prejudice are cutting edge,” she says.

And with her Friends of the Libraries experiences, Jordan weaves an even richer tapestry.