Changes in the Library this past year stemmed not only from coping with the pandemic but also with dealing with structural racism.

“After the killing of George Floyd it was clear that the Libraries needed to take a stand against racism,” says Lisa German, University Librarian and Dean of Libraries. “I did so, with a statement that anti-racism is a priority for us.”

The effort behind the new approach

“Inclusion, diversity, equity, and accessibility are the guiding principles for every aspect of work in the University Libraries.”

The Libraries’ primary drafting team included Jen Neveau and Katie Barrick, co-chairs of the Diversity, Equity, and Inclusion Leadership Committee, and Ashley Alexander, and Emma Molls. Neveau notes that they also called upon others, including the full DEI committee, the Libraries Accessibility Steering Committee, the Libraries Leadership Council, and Lisa Marshall from the U’s Office of Equity and Diversity. They began with an environmental scan of the work of other libraries, peer institutions, and even organizations outside academia.

“There was a lot of intentionality around the words that we’re using,” Neveau says. “That is why we included a definition section: the individual words, diversity, equity, inclusion, accessibility mean so much to so many different people. We wanted to make it really clear.”

They also aimed to make the new approach very readable, she says. “It felt like we would be missing a step if we made an inclusion statement that wasn’t really inclusive because of the language that we were using or the density of it or the way were presenting it.”

They wanted to avoid lofty sentiments and instead make this approach something that everyone in the Libraries could use in their work every day — to transform this IDEA into reality. To that end, they intend to have an annual reporting process, Neveau says, “setting goals, measuring them against our progress using our approach document as a way to move forward in achieving those goals.”

The team hopes that others in the Libraries will do the same. 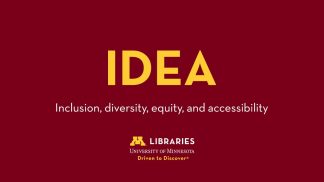 The approach currently reads: “Inclusion, diversity, equity, and accessibility are the guiding principles for every aspect of work in the University Libraries. As individuals, and as a whole, we commit to actions that reject racism and advance social justice. We must be anti-racist, foster diversity and equity, and ensure inclusion and belonging.”

And this is intended to be a living, changing approach. The team envisions adding more context.

“We’re eventually going to include a guide to racism in libraries as an institution,” Neveau says, and “there’s a land acknowledgement piece that we will be including as well.” The team invites comment as people live into the approach.

German says: “I thank the DEI Leadership Committee for developing this living, evolving approach and hope everyone will embrace it in our work going forward.”