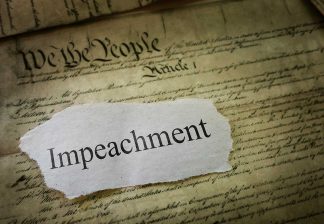 After the insurrection at the United States Capitol on Jan. 6, 2021 — with hundreds of Trump supporters swarming and entering the Capitol building in opposition to Trump’s presidential election loss — lawmakers are poised to remove Trump from office.

The three primary ways we are seeing this unfold is through impeachment, the 14th Amendment, or the 25th Amendment.

The U.S. House of Representatives impeached Trump for a second time on Jan. 13, 2021 after successfully passing House Resolution 24. This is the first time in history that a President has been impeached twice. However, Trump will not be removed from office unless the Senate holds a trial and finds him guilty. The trial is not slated to begin until Jan. 19 when the Senate reconvenes a day before Biden is to take office.

When the founding fathers wrote The Constitution of the United States they were fully aware of the possibility of corruption and abuse of power by elected and appointed officials alike, and thus introduced a series of checks and balances to address such a possibility, including the power of impeachment as a means of removing a corrupt official from office. In particular, according to Article II section 4 of the Constitution of the United States: “The President, Vice-President and all civil Officers of the United States shall be removed from office on Impeachment for, and Conviction of, Treason, Bribery, or other high Crimes and Misdemeanors.”

According to the Constitution, the House of Representatives has the sole power of issuing articles of impeachment (Article 1 section 2) while the Senate has the sole power of conducting a trial, presided over by the Chief Justice of the Supreme Court. If two-thirds of the senators vote in favor of impeachment, the official shall be removed from office (Article 1 section 3). There have been many cases where the House votes to impeach but the Senate acquits and the individual stays in office, including the first time the House impeached Trump in December 2019.

For more information about the history of impeachment, see the A Matter of Facts: Impeachment article posted in December 2019.

The 14th Amendment, passed in the aftermath of the Civil War, is best known for granting citizenship, the right to due process, and equal protection under the law to “all persons born or naturalized in the United States,” including former enslaved people.

A lesser known section of the amendment, Section 3, bars any public official who has previously taken an oath to support the Constitution of the United States from holding any civil, military, or elected office if they are found to have “engaged in insurrection or rebellion against” the Constitution of the United States. Thus, the 14th Amendment would not remove President Trump or other politicians who supported the insurrection from office, but it would bar them from holding office again in the future.

The 25th Amendment to the Constitution, ratified in 1967 following John F. Kennedy’s assassination, sets out the procedures for replacing the President or Vice President in the event of death, removal, resignation, or incapacitation.

According to interpretation from experts at The National Constitution Center, “Section 4 of the 25th Amendment addresses the …. case of a President who may be unable to fulfill his constitutional role but who cannot or will not step aside.”  It is also intended to avoid the possibility of two people both claiming to be president at the same time. Under Section 4,

In his book, Unable: The Law, Politics, and Limits of Section 4 of the Twenty-Fifth Amendment, Brian Kalt, Law Professor at Michigan State University, has put together a flowchart to help visualize how this process can play out with invoking the 25th Amendment.

Larry Jacobs: McKnight Presidential Chair in Public Affairs, the Walter F. and Joan Mondale Chair for Political Studies, and director of the Center for the Study of Politics and Governance in the Hubert H. Humphrey School and the Department of Political Science at the University of Minnesota

See also: Center for the Study of Politics and Governance