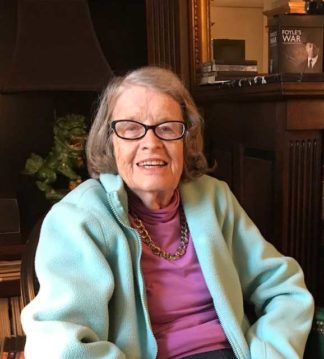 Ann Pflaum, who later conducted many oral history interviews, began her career at the University, fittingly, with a conversation. It was 1975 and she had recently earned her Ph.D. in history at the U. She was talking with a client of her lawyer husband and said: “If you hear of something open at the U . . ..” This was in February 1976.

“Can you come March 1?” he asked. “We have something called Title IX. It requires a study of the entire institution in terms of access for women. . . . And we’re way behind.” (From Interview with Ann Pflaum by Clarke A. Chambers, UDC, p. 7.) While investigating how to bring the University into line with gender equity standards, Pflaum and other task force members flew or drove to the other campuses around the state. At one point, the federal government’s work to ensure access for those with disabilities also was folded into her work.

At the technically oriented Waseca campus, she went into a welding lab to probe into whether people with disabilities could access the lab. One man pulled up his welding mask and said, “We haven’t had a handicapped [person] but we had a girl once.” (Interview, p. 17) The experience helped her become more aware, she says, of “how tilted the world was.”

“I’m just an everyday citizen who has had the chance to tell wonderful stories.”

Following the completion of reports on Title IX and access, she was offered a position as Associate Dean of what is now known as the College of Continuing and Professional Studies. It became, Pflaum says, one of the biggest and most profitable of such programs in the country.

She also took on strategic planning for a time. Then, in 2000, Plfaum was commissioned with Stanford Lehmberg to write a book on the U’s history, “The University of Minnesota, 1945-2000.” The book was based on oral histories; she very much enjoyed interviewing people about their experiences at the University.

As the University Historian, she continued after the book was published interviewing people who had done outstanding things or were interesting in other ways and the putting the oral histories in the University Archives.

One of the people she met along the way was Piet Kolthoff, who came from the Netherlands to the University in 1927, and is considered the founder of modern analytical chemistry. (Kolthoff Hall is named for him.) He was a bachelor and lived on the fourth floor of the Campus Club in a private room. One Christmas Day, he called Pflaum: “They’ve locked the kitchen and I can’t get my holiday meal!” She reassured him: “I’ll call the University Police and they’ll let you in.”

Connecting the University and Friends

Now, Pflaum reflects, she finds it interesting how important the University is to the state. “We’re a greater place than we realize and yet we are very modest about it.”

She speaks of her role on the Friends of the University Libraries Board with humility,too. No doubt recruited for her years serving as the U’s historian, Pflaum says: “I’m very small . . . the heroes are the chairs and co-chairs.

“I’m just an everyday citizen who has had the chance to tell wonderful stories.”