In August 2017, “A Campus Divided: Progressives, Anticommunists, Racists, and Antisemitism at the University of Minnesota 1930-1942,” opened in Elmer L. Andersen Library. This exhibit differed from others featuring engaging and eye-catching materials from archives and special collections, says Kate Dietrick, Archivist for the Upper Midwest Jewish Archives. This exhibit sparked a controversy, was atypically centered on an outside researcher’s work, and began in a conversation.

In 2013, Dietrick had befriended Professor (now Emeritus) Riv-Ellen Prell, who was then the director of the Center for Jewish Studies and a professor in American Studies. Prell asked if the Upper Midwest Jewish Archives held anything related to antisemitism at the University. Not much, Dietrick told Prell.

“Finding actual evidence of discriminatory policies is difficult,” Dietrick said. “Nevertheless, I encouraged her to research the topic in the archives and should she find ample resources, we could put together an exhibit in Andersen.”

During a late November workshop, Dietrick offered insights into this vital work of archival research.

“[H]istory, in particular primary source research conducted in the archives, can have a relevant and powerful impact on our present day.”

Prell, with Ph.D. candidate Sarah Atwood and student researchers, engaged in two years of research in the University Archives, in the Upper Midwest Jewish Archives, and at the Minnesota Historical Society. Their topic expanded as, Dietrick said, “they uncovered documentation of targeted University administration policies and actions against Black, Jewish, and progressive students on campus and began weaving the story together.”

Working with exhibit designer Darren Terpstra, Dietrick helped get the exhibit panels edited, designed, and mounted. She didn’t know what to expect for attendance, but the exhibit opened a few weeks after the white supremacist event in Charlottesville.

“Suddenly during this time many people were openly talking about institutionalized racism in America,” Dietrick said.

The opening exhibit talk was sold out and thousands of people came to Andersen Library to see the exhibit. The exhibit demonstrated that University administrators had discriminated against Black and Jewish students, as well as putting people they considered radical under surveillance.

“A Campus Divided” questioned, Dietrick said, “if these were people who should have buildings on campus named after them in light of this information.”

Dietrick led 331 people on tours, and Prell led community leaders and Board of Regents members. By the time the exhibit ended in December, 565 Post-it notes expressing community members’ feelings had been left. 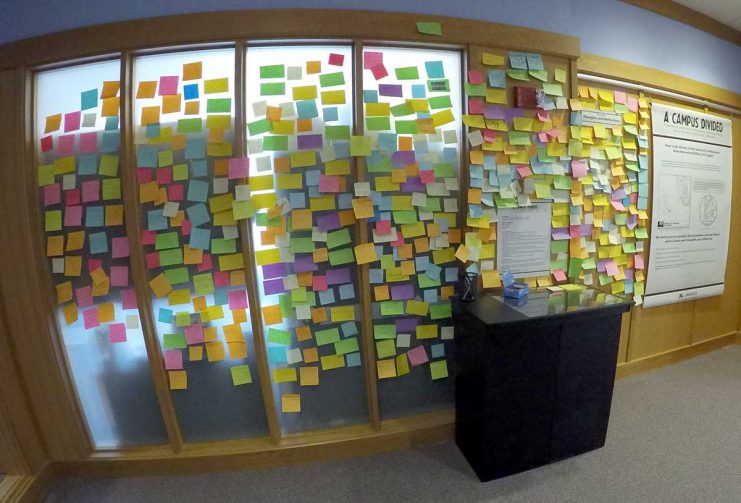 At the workshop, Dietrick talked about four documents, out of the great many identified, that related to housing segregation. The first was about physical exams given to Negro and Jewish students; President Lotus D. Coffman monitored the numbers of these singled out students and their housing needs. Did these students even know their numbers were singled out? Dietrick asked. If you were in one of these groups, how would that make you feel?

The next document was a letter of complaint to Coffman from John Pinkett, Sr., whose son had reserved a room in Pioneer Hall but, after only one night there and a conversation with Coffman, was forced to leave. The Pinketts are Black, Dietrick told the audience. “What was said in that meeting that made Pinkett give up his room?” Dietrick said. “Who is Pinkett Sr. and how much power does he have when he writes not only the President of the University but cc’s the governor of Minnesota?”

We don’t have Coffman’s response to Pinkett Sr. but we do have his response to the head of the Minneapolis NAACP, who had written on behalf of Pinkett Jr. Coffman responds that segregation in housing is what African American students wanted — “he preferred to live with those of his own color” — and that the University was not prejudiced.

The final document refuted something Dietrick heard over and over while giving tours: “Well, that’s just what everyone thought at the time.” E. P. Lyon, Dean of the Medical School, wrote on behalf of making housing for nursing students open to all, as they will be expected to serve all people alike as professionals.

So each piece of evidence illuminates part of the picture and shows that archives are not, as popularly portrayed, musty and dusty, but rather, Dietrick said, “the vibrant, active hub that I encounter. … This exhibit illustrated perfectly how history, in particular primary source research conducted in the archives, can have a relevant and powerful impact on our present day. There is a reason we painstakingly keep archival materials: the documents we safeguard tell stories that can influence not only the way we see the past but the way we envision the future.” 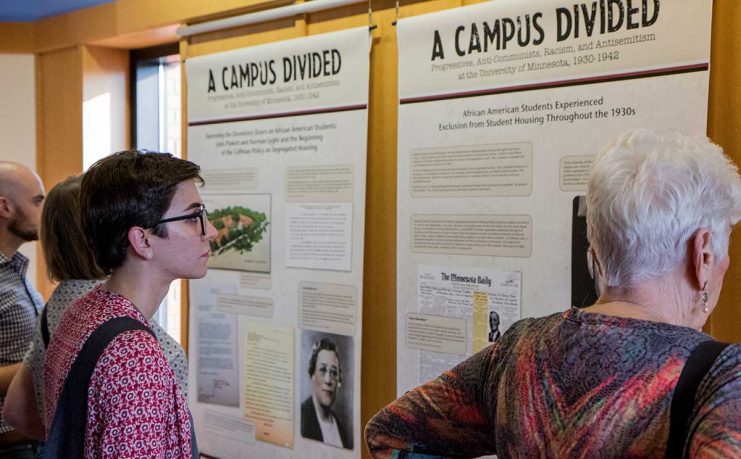 “As voices surged to respond to what had been uncovered,” Dietrick said, “[then] University President Eric Kaler issued an official statement that addressed the exhibit and eventually led to the formation of a Task Force on Building Names and Institutional History.”

The Board of Regents accepted the report but then questioned its research methods. On April 26, 2019, the Regents voted 10 to 1 against renaming, despite protests from faculty and students.

“However, with the entrance of a new University President,” Dietrick said, “coupled with a continued focus on diversity, equity, and inclusion in the aftermath of the murder of George Floyd, the conversation may not be over.”

Prell was recognized with a President’s Award for Outstanding Service, in part because of her work on the exhibit.

And Dietrick recognized archives can be problematic.

Professor [now emeritus] John Wright pointed out that the Black press was the best source for information regarding discrimination against Black students.

Yet even though archives have limits, they can be catalysts for conversation and, perhaps, change.