“Gems of Exquisite Beauty: How hymnody carried classical music to America,” a book by Peter Mercer-Taylor, a professor in the School of Music, was published earlier in October — and, because of efforts by two DASH Research Assistants, it has an attractive, useful website to accompany it.

DASH, Digital Arts, Sciences, and Humanities, provides services to the University community; Benjamin Wiggins of the Libraries, is its Director. 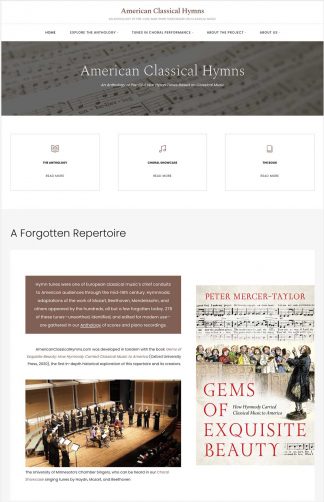 In preparation for this website, Mercer-Taylor met with a team that included Music Librarian Jessica Abbazio and Kristi Bergland, Music Metadata Librarian, in consulting roles. “They were wonderful conversation partners where it came to basic questions about what information users of a website like this would want, what kind of audiences were worth reaching, and so forth,” Mercer-Taylor says.

He did not, however, have a grasp of the fundamental technical aspects of how to develop a website. Mercer-Taylor had 278 musical scores he wanted to post on the site — and have them searchable in a variety of ways. Fortunately, DASH RA Ben Schroeder offered a plug-in that could accomplish what he wanted.

“He came up with ways to organize this database of hymn tunes that was a much more nimble platform,” Mercer-Taylor says.

Alyssa Miller, DASH RA in graphic design, chose a theme for the website and the color palette. She also decided how the pages would be laid out, with which Mercer-Taylor is pleased.

One of the website features, Mercer-Taylor says, is the choral showcase, where he has posted several recordings of ensembles singing the hymns. There’s an opportunity for choirs to submit more recordings: “It’s this sort of open, living body of modern recordings of these pieces.”

“Minnesota Public Radio has decided to get behind this and that’s a very exciting thing to get out there,” Mercer-Taylor says. The classical service of MPR published an online feature story and also linked to it on their choral stream Facebook page. About 400 users have taken a look at the website in the short time it’s been up. And he’s seen results just in 24 hours after the MPR story was posted.

“I’ve been contacted by four other choirs that want to record,” he says. “It’s beginning to build the kind of momentum that I hoped it would.”

The RA salaries for DASH students have, from the beginning, been paid by Libraries’ donors Darby and Geri Nelson. Thank you, Darby and Geri!