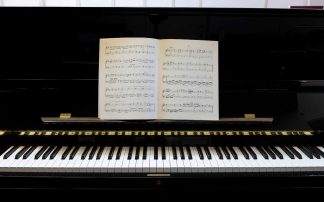 The opening to diversifying the Music Library’s collection began with a simple request. Music Librarian Jessica Abbazio was approached by piano student Jared Miller about locating scores for a trio by the Mexican composer Manuel Ponce for his master’s recital. It was not in the Music Library.

During the search farther afield for it, Abbazio discovered that scores by Latin American composers in general can be very hard to find.

She also noted that scores by African American and Asian composers were lacking in the Music Library’s collection. While that might not be surprising, as the School of Music has focused its curriculum on the Western canon of music exemplified by Bach, Mozart, and Beethoven, Abbazio believed it was time for a change.

“The Latin American collection that Jessica is curating right now is really crucial.”

For Miller, the Latin American music opened up his sound as he imagined landscapes and other images.

“It greatly informed how I play and approach the Western canon [too],” he says. “I wonder how long it would have taken me to reach that if I hadn’t had those nontraditional experiences?”

Doctoral student Anne Briggs taught a course on world music this summer and found the students to be fascinated by the possibilities of music from anywhere — including here in the Twin Cities. Diversifying the Music Library’s collection is important to meet students’ needs, she says.

“The Latin American collection that Jessica is curating right now is really crucial,” Briggs says. “Because we have long talked about the integration of the Americas in music-making and creation, but we often don’t have any tangible scores to teach from as a TA or a faculty member.” They face limits, she adds, on what they can teach — and on what works they even are aware of.

“As an ethnomusicologist,” Briggs says, “I have a vested interest in this. It’s something that a lot of my colleagues are thinking about: How are canons curated? How are voices omitted or erased that we as scholars can highlight or integrate those folks in new ways?”

Briggs hopes the Music Library can always think about who is being left out, to constantly reflect on these questions, and to avoid stagnating. Says Abbazio: “You go to school to expand your global horizons, and this is one way to do that.”

A statement as a springboard

Recently, Abbazio released a Music Library statement that begins: “The University of Minnesota Music Library is committed to expanding our collections beyond the composers of the traditional Western canon. … We acknowledge this historical dearth of diversity in our holdings and are dedicated to making changes to how and what we collect.”

“I am profoundly grateful to our Music Librarian, Jessica Abbazio, and the University of Minnesota Libraries for broadening the scope of the Music Library’s collection beyond the Western canon,” School of Music Director Michael Kim wrote in response. “Jessica identified deficiencies in the collection upon her arrival in 2018 and immediately began collaborating with our faculty, students, scholars, and our greater community to make significant acquisitions of scores from Black and Latin American composers.”

Abbazio has made a strong start in purchasing scores by Latin American and Black composers. She looks forward to adding works by East Asian and Asian-American composers — and others suggested by Music Library users.

Her goal is to have something for all performers and scholars in the School of Music and to provide new scores for all members of the community to explore.

Says Kim: “Jessica’s leadership and collaboration with the School of Music community and the University Libraries reflects our collective and ongoing commitment to conscientiously build a more diverse selection of resources for students and faculty here at the University of Minnesota and the public at large.”