Chris Stedman, who loved maps as a youngster, came back to them as he was investigating life online. Stedman, whose first book was “Faitheist,” began writing a new book in 2016 because he was trying to figure out something — and Ryan Mattke, Head of the Borchert Map Library, and Kirsten Delegard, with Mattke Co-Director of the Mapping Prejudice Project, helped him along the way.

The origin of “IRL: Finding Realness, Meaning, and Belonging in our Digital Lives” began with conversations. 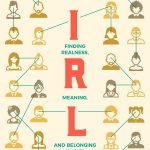 When Stedman was a youngster, maps opened up the world beyond the small town in which he grew up. He was enthralled by maps. As he wrote this book, he was drawn about them again.

“I found myself thinking about the parallel between the way cartographers map physical space and the way we map ourselves online,” he says. Cartographers must make selections of what to show; if they included everything, the map of the territory would be as large as the territory itself! Similarly, online, “we have to choose what we share — that process of curation reveals things to us about ourselves,” Stedman says.

Yet these choices are not neutral, as he came to realize while talking with Mattke and exploring the Borchert Map Library. Mattke shows his students a map of Germany in 1880 and, Stedman says, they tend to assume this simply represents how Germany was then — it’s neutral. Then “he reveals that the map was made for a king — so it represented the king’s vision of Germany,” Stedman says. “What it doesn’t show is how Germany was for a peasant in 1880.”

This map showed the reality of the person who paid for it; it was an expression of power that follows certain norms and conventions. “Similarly, the internet and the platforms we use to map our lives online have all kinds of norms and conventions that represent various interests other than necessarily our own,” Stedman says. “The ways that we represent ourselves online, guided by those conventions that are nearly imperceptible to us, have influenced the way we imagine ourselves and the world around us.”

In discussions with Delegard about the Mapping Prejudice project, Stedman found the racial covenants barring Black and brown people from occupying property continued the process of colonizing the country that began with Europeans’ arrival.

“The way these racial covenants were put into deeds in Minneapolis and St. Paul and beyond really shaped what neighborhoods looked like demographically, which has consequences we still live with today,” he says.

Digital life: Fake or not?

“The ways that we represent ourselves online … have influenced the way we imagine ourselves and the world around us.”

Similarly, the platforms that we use to map whose stories are worth being documented online represent the interests of people who create the platform and who make money from the platform.

All of us who use social media need to be aware of the norms and conventions that underlay these platforms — and who benefits from them.

“They create real consequences in terms of whose stories get told and how they get told,” Stedman says. Yet life online can be real life. “A map at its best points you in a direction of a territory and gives you a chance to explore it for yourself. And if we look at our digital representations as tools and resources that help us better understand ourselves, they can be richly informative.”

To think that digital life is fake can be harmful. We simply need to be mindful of the limitations, he says, and seek ways “to create opportunities for communities to see themselves as part of a greater whole. Like a map, we have to use it carefully and intentionally.”

Stedman invites everyone to pick up his book and use it like a map to accompany him on a journey of discovery.